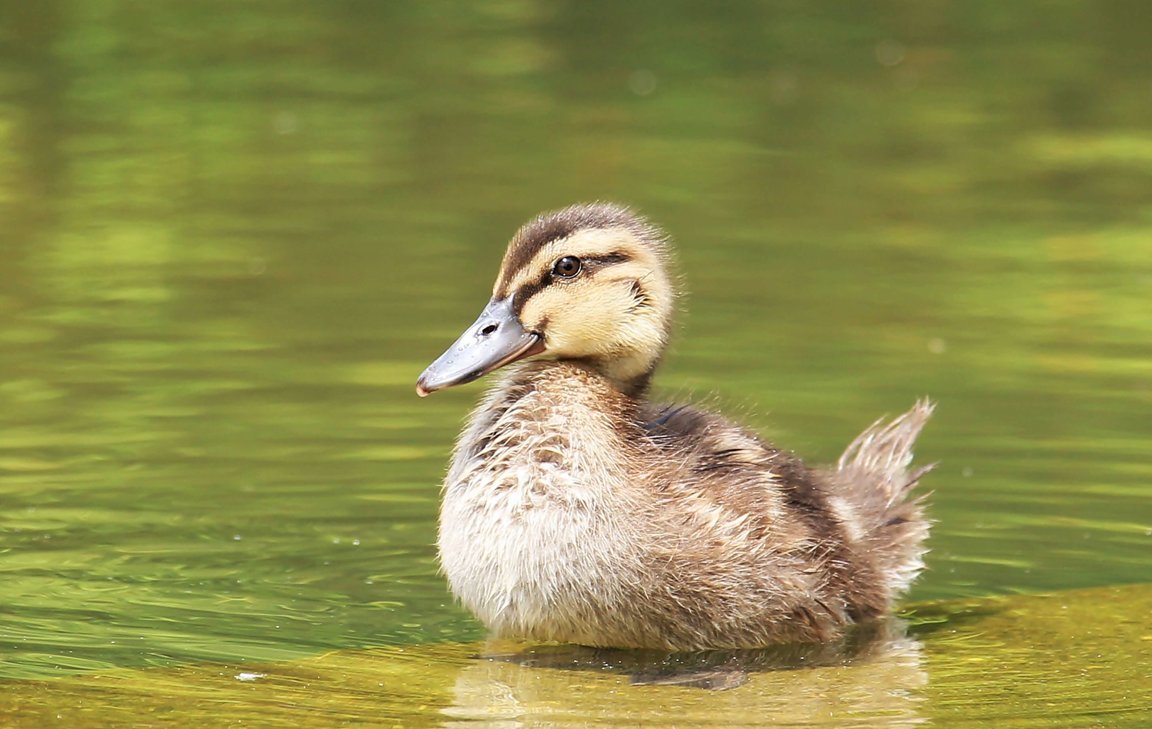 Each year, people are amazed to see ducks and ducklings in the most unlikely places, such as walking single-file through city streets or nesting under bank teller windows! Luckily, ducklings are precocious and mature quickly. Here are some common sense solutions to typical problems encountered in suburban and urban settings.

Ducks commonly nest in poor spots, such as under bank-teller windows or the middle of busy ball fields. These nests may fall prey to cats, dogs or human malice. However, moving the eggs and nest is not only illegal according to federal law, but also the parents usually won't follow it. Instead, put up educational signs and perhaps try to fence off the nest temporarily. There isn't much else you can do. Some people have tried moving the nest, a few feet at a time, into a better area. This may work if the relocation site is nearby and you move the nest a bit by bit. However, the mother may stay on the nest making relocation impossible. It's usually best to leave the nest alone and hope for the best.

DUCKLINGS SEPARATED FROM THEIR MOTHERS

If the mother was seen recently, wait it out for an hour and see if she comes back. If the ducklings are beginning to scatter, or you're not sure how long they've been alone, put a plastic laundry basket over them, upside down, to contain them while waiting for the mother to return. She will see them through the lattice sides of the basket and make contact. If she returns, slowly approach and overturn the basket so she can collect her young.

DUCKS IN YOUR POOL

The best solution is to leave them alone, as long as the ducklings are able to get out of the pool. The mother will move her young when they are older and less vulnerable. If you must evict them, go to your local party store and buy silver mylar balloons with heavy weights on the bottom. Put the balloons around the perimeter of the entire pool, about every 20 feet. The balloons will bob in the breeze and make the ducks nervous. To enhance the harassment effect, you can also float a beach ball in the pool or use an electric boat.

Most ducklings get stuck in pools because the water level is too low. The solution is to either raise the water level (simplest approach), fish them out with a net, or create a ramp angled <45 degrees, with a wet towel attached to it for traction.

If you know where the duckling came from, then it's best to take the duckling to that pond for release. The duckling will soon rejoin his family. Sometimes other ducks will even foster-parent the young duckling. If the duckling was left behind for a while and his origin is unknown i.e. fished out of storm drain or spillway, you can contain the duckling with an upside-down laundry basket (as described above) and monitor to see if the mother returns. If she doesn't come back after 4-8 hours, call your local fish and game agency to locate a wildlife rehabilitator. These are tough judgment calls. If you need to hold the duckling(s) in captivity for a few hours, DO NOT give them water to swim in because ducklings are not waterproof until they're older. They may become chilled and die. Just give them a shallow pan of water (to drink) and some crushed, non-sugary cereal like Cheerios.

REMOVING DUCKS FROM AN AREA

You can shepherd ducks by creating a "moving wall," i.e. have people hold sheets between them and move behind the ducks, forcing them to walk in the desired direction. However, consider waiting to move them out because the young may be vulnerable. Sometimes you may need to temporarily feed them greens like kale, spinach and poultry starter food (available from an animal feed store,) and set up a shallow kiddy pool with ramps until the ducklings can fly. Particularly in cities, early eviction can mean certain death.

MOVING A DUCK FAMILY FOR THEIR SAFETY

The only way to catch adult ducks is to do so at night (they don't see well in darkness), by creeping up on them while they sleep, then gently covering them with a lightweight blanket or towel and scooping them into a carrier. Catch the ducklings next with a net or sheet, but try to minimize stress as they will be scared and may scatter. Be sure the net doesn't have large holes in which they may escape or become entangled. Consult your state fish and game agency prior to any intervention for any special authorization you might need.

GETTING DUCKLINGS OUT OF SEWER GRATES

These are tricky situations. Often you'll have to contact your town's Public Works Department for assistance with removing the grate. The police can be a valuable resource in terms of helping you contact the correct town employee. You'll need a fishing net or a fabric "hammock" stretched between two golf clubs to catch the ducklings below the grate. You may have to be creative in terms of capture strategies, depending on the logistics of where they're stuck. Once you catch them, make sure they are dry (or use a hair dryer) before setting them back outside for the mother to retrieve. Put an upside-down laundry basket over them until the mother comes (so they don't scatter), and then slowly lift it when she reappears. If she doesn't come back by nightfall, contact your local wildlife rehabilitator.