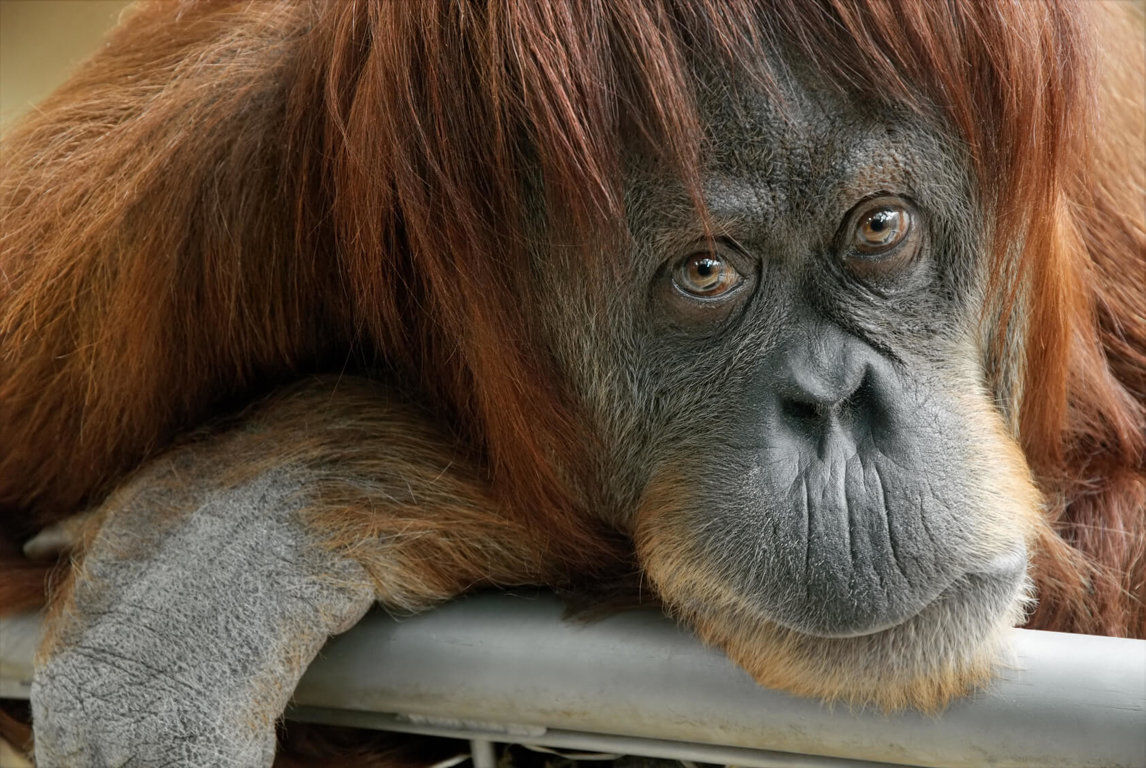 Despite their professed concern for animals, zoos remain more "collections" of interesting "items" than actual havens or simulated habitats. Zoos teach people that it is acceptable to keep animals in captivity, bored, cramped, lonely and far from their natural homes. They are a form of animal entertainment, not education.

Zoos range in size and quality from cageless parks to small roadside menageries with concrete slabs and iron bars. The larger the zoo and the greater the number and variety of the animals it contains, the more it costs to provide quality care for the animals. Although more than 112 million people visit zoos in the United States and Canada every year, most zoos operate at a loss and must find ways to cut costs (which sometimes means selling animals) or add gimmicks that will attract visitors. Zoo officials often consider profits ahead of the animals' well-being.

Animals suffer from more than neglect in some zoos. When Dunda, an African elephant, was transferred from the San Diego Zoo to the San Diego Wild Animal Park, she was chained, pulled to the ground, and beaten with ax handles for two days. One witness described the blows as "home run swings." Such abuse may be the norm. "You have to motivate them," says San Francisco zookeeper Paul Hunter of elephants, "and the way you do that is by beating the hell out of them."

Zoos claim to educate people and preserve species, but they frequently fall short on both counts. Most zoo enclosures are quite small, and labels provide little more information than the species' name, diet and natural range. The animals' normal behavior is seldom discussed, much less observed, because their natural needs are seldom met. Birds' wings may be clipped so they cannot fly, aquatic animals often have little water, and the many animals who naturally live in large herds or family groups are often kept alone or, at most, in pairs. Natural hunting and mating behaviors are virtually eliminated by regulated feeding and breeding regimens. The animals are closely confined, lack privacy and have little opportunity for mental stimulation or physical exercise, resulting in abnormal and self-destructive behavior called zoochosis.

A worldwide study of zoos conducted by the Born Free Foundation revealed that zoochosis is rampant in confined animals around the globe. Another study found that elephants spend 22 percent of their time engaging in abnormal behaviors, such as repeated head bobbing or biting cage bars, and bears spend about 30 percent of their time pacing, a sign of distress.

One sanctuary that is home to rescued zoo animals reports seeing frequent signs of zoochosis in animals brought to the sanctuary from zoos. Of chimpanzees, who bite their own limbs from captivity-induced stress, the manager says: "Their hands were unrecognizable from all the scar tissue."

More than half the world's zoos "are still in bad conditions" and treating chimpanzees poorly, according to renowned chimpanzee expert Jane Goodall.

As for education, zoo visitors usually spend only a few minutes at each display, seeking entertainment rather than enlightenment. A study of the zoo in Buffalo, N.Y., found that most people passed cages quickly, and described animals in such terms as "funny-looking," "dirty," or "lazy."

The purpose of most zoos' research is to find ways to breed and maintain more animals in captivity. If zoos ceased to exist, so would the need for most of their research. Protecting species from extinction sounds like a noble goal, but zoo officials usually favor exotic or popular animals who draw crowds and publicity, and neglect less popular species. Most animals housed in zoos are not endangered, nor are they being prepared for release into natural habitats. It is nearly impossible to release captive-bred animals into the wild. A 1994 report by the World Society for the Protection of Animals showed that only 1,200 zoos out of 10,000 worldwide are registered for captive breeding and wildlife conservation. Only two percent of the world's threatened or endangered species are registered in breeding programs. Those that are endangered may have their plight made worse by zoos' focus on crowd appeal. In his book The Last Panda, George Schaller, the scientific director of the Bronx Zoo, says zoos are actually contributing to the near-extinction of giant pandas by constantly shuttling the animals from one zoo to another for display. In-breeding is also a problem among captive populations.

Zoo babies are great crowd-pleasers, but what happens when babies grow up? Zoos often sell or kill animals who no longer attract visitors. Deer, tigers, lions and other animals who breed often are sometimes sold to "game" farms where hunters pay for the "privilege" of killing them; some are killed for their meat and/or hides. Other "surplus" animals may be sold to smaller, more poorly run zoos or to laboratories for experiments.

Ultimately, we will only save endangered species if we save their habitats and combat the reasons people kill them. Instead of supporting zoos, we should support groups like the International Primate Protection League, The Born Free Foundation, the African Wildlife Foundation and other groups that work to preserve habitats, not habits. We should help non-profit sanctuaries, like Primarily Primates and the Performing Animal Welfare Society, that rescue and care for exotic animals, but don't sell or breed them.

Zoos truly interested in raising awareness of wildlife and conservation should create high-tech zoos with no animals. Visitors could observe animals in the wild via live satellite links with far off places like the Amazon rain forest, the Great Barrier reef and Africa.

It is best not to patronize a zoo unless you are actively working to change its conditions. Avoid smaller, roadside zoos at all costs. If no one visits these substandard operations, they will be forced to close down. Zoos are covered under the federal Animal Welfare Act (AWA), which sets minimal housing and maintenance standards for captive animals. The AWA requires that all animal displays be licensed with the U.S. Department of Agriculture, which must inspect zoos once a year. However, some zoos that have passed USDA inspections with flying colors have later been found by humane groups to have numerous violations. Start a "Zoocheck" program to build a strong case for implementing changes.