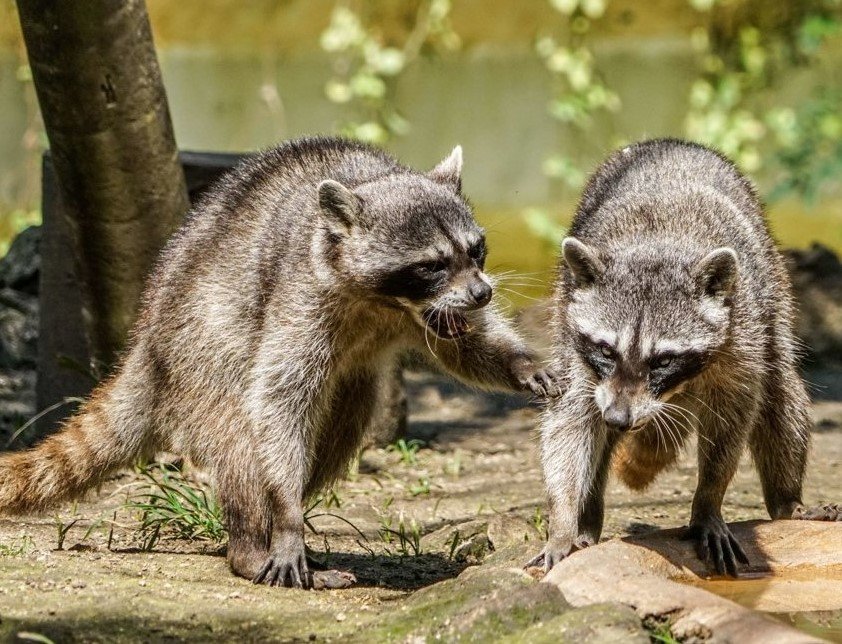 Raccoons are intelligent, fascinating and highly adaptable mammals. As we destroy more and more wildlife habitat, we force animals like raccoons to come into closer contact with us. There's no need to panic or pay hundreds of dollars for trapping services because most problems can be easily resolved with some simple advice and household materials. Many conflicts occur in spring and summer when raccoons take advantage of cavities in human dwellings to raise their young. This is why it's vital to solve problems in a way that doesn't separate a mother from her cubs. Here are some solutions to common raccoon problems:

KEEPING RACCOONS OUT OF GARBAGE

Often garbage disposal companies don't close dumpster lids after emptying them in the early morning hours. Raccoons are enticed by the food smells, jump in, and can't climb the slippery sides. This problem is easily resolved by putting some strong branches or plank-like pieces of wood in the dumpster so the raccoons can climb out. If your company leaves dumpster lids open all the time, post a sign telling employees that it's vital to keep the lid closed so animals don't become trapped inside.

DO DAYTIME RACCOONS HAVE RABIES?

Even though raccoons are considered nocturnal, mother raccoons sometimes nap in trees or forage during the day when they have nursing cubs which depletes their energy. Coastal raccoons take advantage of the tides and are often seen by day. Call your local animal control officer or police if an adult raccoon seen in daytime is acting at all sick or showing abnormal behaviors such as partial paralysis, circling, staggering as if drunk or disoriented, self-mutilating, screeching, or exhibiting unprovoked aggression or unnatural tameness. Otherwise, just leave the raccoon alone and keep people and companion animals away from the animal.

GETTING RACCOONS OUT OF ATTICS & CHIMNEYS

In spring and summer, mother raccoons often take advantage of chimneys and attics as denning sites for raising cubs. The easiest and best solution is to wait a few weeks for the raccoons to move out on their own. As soon as the cubs are old enough to go on nighttime outings with their mother, she will take them out of the chimney once and for all rather than continually carrying them back and forth. Mother raccoons clean their babies meticulously to avoid attracting predators. If you absolutely must evict the raccoon family, remember that raccoons look for quiet, dark and non-noxious smelling places to raise their young. By creating the opposite conditions, you can evict them using the following methods:
Eviction of Chimney Raccoons: Keep the damper closed and put a blaring radio (rock or rap music works best) in the fireplace. Then put a bowl of ammonia on a footstool near the damper. Apply these deterrents JUST BEFORE DUSK; mother raccoons won't want to move their cubs in broad daylight. Be patient, it may take a few days for the mother to move her young. Once you inspect and make sure all the raccoons are gone, promptly call a chimney sweep to install a mesh chimney cap (the best kind has a stainless steel top) and this situation will not recur.

Eviction of Attic Raccoons: Leave all the lights on and place a blaring radio and rags sprinkled with 1/4 cup of ammonia around the attic. You can also enhance the deterrent effect by adding cayenne pepper or the commercial repellent Repel around the attic and also hanging an electrician's drop light over the denning area. Apply these deterrents JUST BEFORE DUSK; mother raccoons will not want to move their cubs in daylight. Be patient, it may take a few days for the mother to move her young. Once the raccoons are gone, promptly seal any entry hole and this situation will not recur.

If you leave food outside all the time, you will attract raccoons and other animals. The solution is to feed the cats only at a certain time in the morning or midday, then take away any uneaten food. The cats will get used to the schedule and modify their behavior accordingly.

No self-respecting raccoon is going to ignore a free buffet! The best solution is to feed your cats indoors and not use a cat door at all. There are strong, electrically controlled doors that you can purchase which only let your designated animals in.

It is difficult to have a delicacy like fish in an area and expect raccoons not to take notice! The best solution is to maintain a higher water level (at least 3 feet deep) and stack cinder blocks, large rocks, or ceramic pipes in the bottom of the pond so the fish can escape from the raccoons and take refuge.

The raccoons are going after the grubs in your lawn. If you keep your lawn well watered, this exacerbates the problem since it drives the grubs to the surface layer of the soil. The good news is that the grubbing activity, although unsightly, does not permanently damage the lawn. A long-term, ecological solution is to apply the product "Milky Spore" to the soil. This natural bacteria will spread and get rid of the grubs, but it takes a long time to work (1+ years). Don't use chemical pesticides due to their toxic effect on the environment, people and animals.

RACCOONS IN THE CHICKEN COOP

The only answer is to reinforce your chicken coop so the raccoons cannot have access to the chickens. Heavy gage welded wire should be used and another layer of finer mesh put over it to prevent raccoons from being able to reach through. Although an inconvenience, once an animal pen is well reinforced and maintained, there will be no more problems.

Trapping is rarely a solution to wildlife nuisance problems. As one animal is removed, another from the surrounding area will soon take his place. The answer is to exclude the animal from the food or nesting source that is attracting him.

Nuisance wildlife control companies charge a fee -- sometimes hundreds of dollars -- for problems that homeowners can often resolve themselves. In addition, when animals are trapped during birthing season, starving babies may be left behind. Homeowners are then horrified to find a foul odor emanating throughout their house. Animals should never be trapped under extreme conditions, such as on sunny rooftops, in rain, snow, sleet, or other bad weather which will cause the animals to suffer and die.

Don't trap unless an animal is stuck somewhere and can't get out or poses an immediate threat to humans or domestic animals. If you do hire a nuisance trapper, ensure that humane practices are followed and no animals are orphaned in the process.

MAKING SURE RACCOONS ARE GONE

Most attics contain clutter, making it hard to verify if the raccoons are gone. Before sealing any entry hole, stuff it first with newspaper and see if the paper stays in place for 3 successive nights. If so, the den is vacated. After sealing the entry hole with hardware cloth, make sure no raccoons are left behind by leaving a sardine or marshmallows in the attic and check if the food is uneaten after 24 hours, or sprinkle flour in front of the entry hole and check for footprints of a raccoon trying to get out.