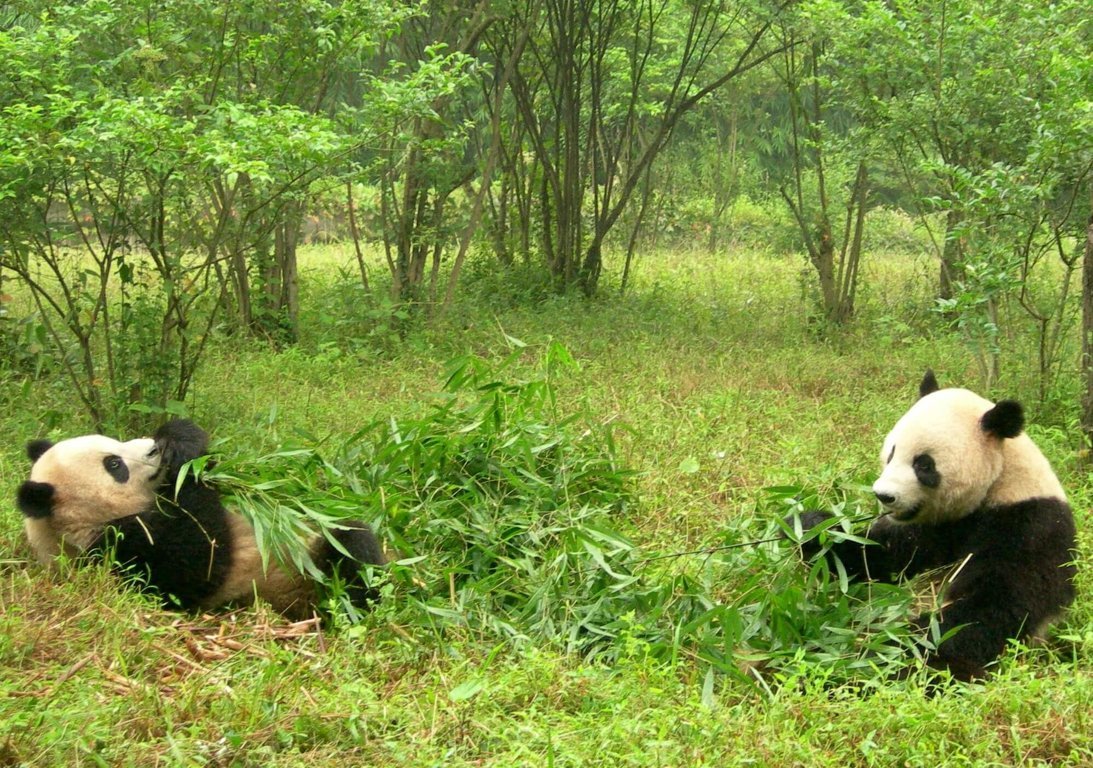 Wildlife preservation is informed management of the natural environment to protect and benefit plants and animals. Extinction may occur due to natural causes. However, the actions of people and the growth of human population have all too quickly created a threat to the well being of wildlife. There have been declines in the numbers of some species and extinction of others. The need for conservation was created by human beings.

About 2 million years ago, when Homo sapiens first appeared on the earth, their world was biologically rich. Millions of species of plants and animals flourished...from the single celled to the complex. The first humans enjoyed a lush and beautiful environment filled with brilliant color and variety. Every ecosystem harbored life in many forms...from forest to meadow, wetland to desert.

These early people chose to decorate their dwellings with paintings of the wildlife that made up their environment. As they evolved and developed belief systems, they used the plants and animals that surrounded them in their rituals. Nature was integrated into their culture. It has played an important part in the way modern man thinks and behaves today. We bring nature into our daily lives. If you have a companion animal, or even a house plant, if you enjoy a landscape painting or a piece of nature photography, or if you visit a park or a nature preserve, you are recognizing the importance of natural elements in your life. The difference we perceive in the range of natural settings, from the beauty of a garden to the desolation of a vacant lot, is determined by the kinds of organisms that each contains and the communities they form.

Few of us would prefer an environment of concrete buildings and asphalt paving to gorgeous coastlines, majestic mountains or peaceful forests. Our pleasure in life would be diminished if only one bird sang, or merely a handful of fish lived in the sea. But our aesthetic appreciation of the wildlife that fills our earth is only one reason to preserve the variety and abundance of species. All living things contribute to the ecology and are vital to its health and continuation. Despite our advances in technology, we as human beings still rely on our environment to provide many of the things necessary to our survival. The earth's biodiversity supports all life, including that of humans. Our food, medicines, energy sources, textiles and building materials are all derived directly or indirectly from living organisms. Our way of life is inextricably linked to the natural world.

Plants convert the energy of the sun through photosynthesis into the energy that sustains all life on this planet. Everything we eat can be traced to either a plant or to an animal that lived by eating plants. For this reason, the vegetation on this planet is necessary to our survival. Maintaining a variety of plant forms is crucial. Although the food we consume represents only about 100 kinds of plants, there are countless others we might utilize. As our population increases and land for agricultural use dwindles, we will have to look for other food crops and new ways to grow them. It is important to preserve a variety of plant species with their future use in mind.

Almost all of our medicines come from living organisms: some directly as from bacteria or fungi or plants, others are now synthetically made but were originally discovered in their natural form. In China and other parts of the world, medicinal plants in their original form are used as treatment for all kinds of illness. Many of our manufactured pharmaceuticals offer a more controlled use of these plants, but are none the less dependent upon them. Science hopes to identify even more organisms beneficial to the treatment of disease. We have only scratched the surface of the vast number of plant species to be studied. A great discovery could still be found that might change the lives of millions.

The study of living things advances our knowledge in all areas. By observing the behavior of the great apes anthropologists learn about prehistoric man. By studying the movements of the creatures and plants of the earth engineers can learn about mechanics. Yet there are organisms that have yet to be scientifically studied. For example, fungi exist in countless numbers and forms. They can be used to preserve food, to produce medicine such as antibiotics without which many lives would be lost and much of the food we eat depends on them. We would have no bread if not for yeast to make it rise, no wine without fermentation. The importance of the organisms around us gains some perspective when we see the practical and economic applications of those organisms. Yet we have explored only a fraction of the species of existing fungi. There are secrets yet to be learned and benefits yet to be gained. If even one species is lost we may have missed a vital opportunity to improve our lives. The one species that perishes might have had the potential to feed entire populations, to cure disease or to provide invaluable knowledge.

We must also see beyond our own needs. There is a much larger picture and many ecological reasons to preserve species. Scientists refer to the role played by living things as "ecosystem services." Communities of microbes, plants and animals, along with nonliving environmental features such as soil and water, constitute an ecosystem. Ecosystem services are provided by many species including those that prevent soil erosion or affect the quality of the air, or convert the energy from the sun into food, or influence the climate, and other functions vital to the ecosystem as a whole.

Optimally, the earth is self-perpetuating, but its continued ability to be a healthy environment for humans is dependent upon the species that sustain its ecosystems. The forests, wetlands, prairies and deserts are all necessary to its well being. If we continue to allow species to die out, it will become increasingly difficult for these ecosystems to operate successfully and it may become difficult for all living things to survive.

The very climate of the earth is dependent on the vital ecosystems that comprise it. The earth's forests perform the vital task of photosynthesis, which removes carbon dioxide from the atmosphere as plants make food. If the forests are cleared and not replaced, our atmosphere will change.

TAKING IT FOR GRANTED

There is dramatic evidence that the earth's ecology is badly stressed. We have taken the importance of the ecosystem for granted and we are blind and deaf to the signs of the strain. Because plants that hold soil in their roots have been eliminated, about one-fifth of all the topsoil in the world has eroded and is lost. The consequences of this loss are fewer plants, fewer productive farms and therefore less food for animals and humans alike. Understanding and maintaining natural communities is the key to sustaining life on earth. No species is unimportant. They are all part of the system.

Beyond the questions of ecology and economics is the ethical issue. What right do we have as one single species to destroy other living things. Human beings began to destroy the other organisms in their environment when they began to practice agriculture more than 10,000 years ago. There were no more than several million people then. With our exploding population the rate of consumption has proportionately increased...about 40 percent of the net biological productivity (what is produced by all living organisms) on the land. We are already taking a disproportionate share of the bounty of the earth. Ecologists believe that we need to respect the value of other organisms and preserve them before we increase that share. These organisms deserve our respect. They support our very lives on the planet.

With the development of ever more efficient weapons, humans have been able to kill wildlife with growing efficiency. Hunters have caused several species of animals to perish. For agriculture, industry and for living space we have cleared the forests, drained the wetlands, and dammed the rivers. This encroachment on the environment has negatively impacted vast amounts of plant and animal habitat. What hasn't been destroyed has been disrupted, and the natural processes altered. This affects the diversity and size of wildlife populations in these habitats. Some are no longer connected to their ecosystems.

Various species became extinct before there were humans on the earth, but new species developed to replace them. The variety of life continued. Now, however, when people kill off a species there is little hope that it will be replaced. The variety of life is decreasing. Many species of wildlife are gone forever. In North America alone such extinction includes the Carolina parakeet, the passenger pigeon, the California grizzly bear and a birch tree that once flourished in Virginia.

An increased interest in conservation began in the late nineteenth century. Many governments passed laws to protect and set aside national parks and reserves for wildlife. It was these efforts that saved the American bison, the pronghorn and many rare plants found in Hawaii and in the Galapagos. Yet several hundred species of animals and thousands of species of plants are still at risk. These include well-loved animals like the Giant Pandas, the Asiatic lion, the Bengal tiger, the blue whale, the mountain gorilla, the whooping crane, the California condor, the Florida panther and all the Asian rhinoceroses. The St. Helena redwood, the black cabbage tree, the Ozark chestnut and several kinds of California manzanitas face extinction as well.