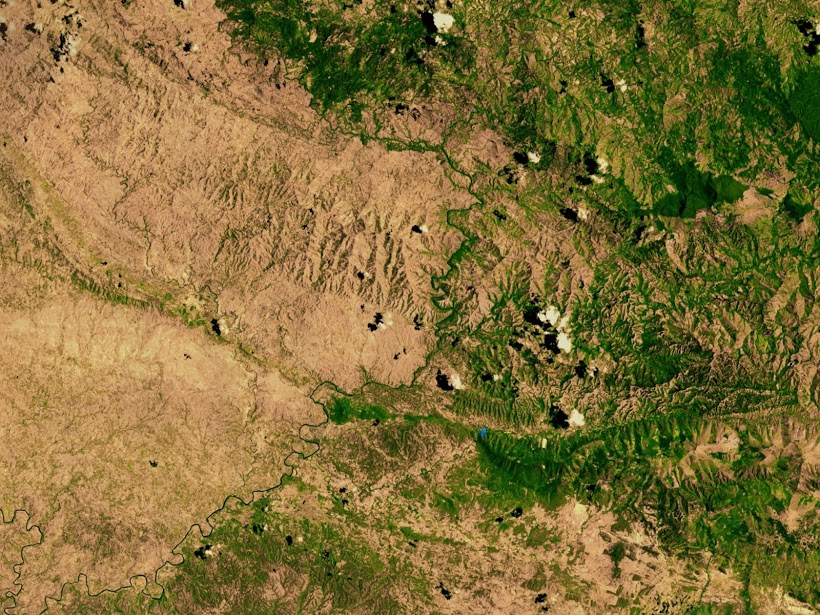 The world's great deserts were formed by natural processes interacting over long intervals of time. During most of these times, deserts have grown and shrunk independent of human activities.

Paleodeserts, large sand seas now inactive because they are stabilized by vegetation, extend well beyond the present margins of core deserts, such as the Sahara. In some regions, deserts are separated sharply from surrounding, less arid areas by mountains and other contrasting landforms that reflect basic structural differences in the regional geology. In other areas, desert fringes form a gradual transition from a dry to a more humid environment, making it more difficult to define the desert border.

These transition zones have very fragile, delicately balanced ecosystems. Desert fringes often are a mosaic of microclimates. Small hollows support vegetation that picks up heat from the hot winds and protects the land from the prevailing winds. After rainfall the vegetated areas are distinctly cooler than the surroundings. In these marginal areas, human activity may stress the ecosystem beyond its tolerance limit, resulting in degradation of the land. By pounding the soil with their hooves, livestock compact the substrate, increase the proportion of fine material, and reduce the percolation rate of the soil, thus encouraging erosion by wind and water. Grazing and the collection of firewood reduces or eliminates plants that help to bind the soil.

This degradation of formerly productive land, desertification, is a complex process. It involves multiple causes, and it proceeds at varying rates in different climates. Desertification may intensify a general climatic trend toward greater aridity, or it may initiate a change in local climate.

Desertification does not occur in linear, easily mappable patterns. Deserts advance erratically, forming patches on their borders. Areas far from natural deserts can degrade quickly to barren soil, rock, or sand through poor land management. The presence of a nearby desert has no direct relationship to desertification.

Unfortunately, an area undergoing desertification is brought to public attention only after the process is well underway. Often little or no data are available to indicate the previous state of the ecosystem or the rate of degradation.

Scientists still question whether desertification, as a process of global change, is permanent or how and when it can be halted or reversed.

Desertification became well known in the 1930's, when parts of the Great Plains in the United States turned into the "Dust Bowl" as a result of drought and poor practices in farming, although the term itself was not used until almost 1950. During the dust bowl period, millions of people were forced to abandon their farms and livelihoods. Greatly improved methods of agriculture and land and water management in the Great Plains have prevented that disaster from recurring, but desertification presently affects millions of people in almost every continent.

Increased population and livestock pressure on marginal lands has accelerated desertification. In some areas, nomads moving to less arid areas disrupt the local ecosystem and increase the rate of erosion of the land. Nomads are trying to escape the desert, but because of their land-use practices, they are bringing the desert with them.

It is a misconception that droughts cause desertification. Droughts are common in arid and semiarid lands. Well-managed lands can recover from drought when the rains return. Continued land abuse during droughts, however, increases land degradation. By 1973, the drought that began in 1968 in the Sahel of West Africa and the land-use practices there had caused the deaths of more than 100,000 people and 12 million cattle, as well as the disruption of social organizations from villages to the national level.

In 1988 Ridley Nelson pointed out in an important scientific paper that off-road vehicles significantly increase soil loss in the delicate desert environment of the western United States. In a few seconds, soils that took hundreds of years to develop can be destroyed.

While desertification has received tremendous publicity by the political and news media, there are still many things that we don't know about the degradation of productive lands and the expansion of deserts. The desertification problem and processes are not clearly defined. There is no consensus among researchers as to the specific causes, extent, or degree of desertification. Contrary to many popular reports, desertification is actually a subtle and complex process of deterioration that may often be reversible.

In the last 25 years, satellites have begun to provide the global monitoring necessary for improving our understanding of desertification. Landsat images of the same area, taken several years apart but during the same point in the growing season, may indicate changes in the susceptibility of land to desertification. Studies using Landsat data help demonstrate the impact of people and animals on the Earth. However, other types of remote-sensing systems, land monitoring networks, and global data bases of field observations are needed before the process and problems of desertification will be completely understood.

At the local level, individuals and governments can help to reclaim and protect their lands. In areas of sand dunes, covering the dunes with large boulders or petroleum will interrupt the wind regime near the face of the dunes and prevent the sand from moving. Sand fences are used throughout the Middle East and the United States, in the same way snow fences are used in the north. Placement of straw grids, each up to a square meter in area, will also decrease the surface wind velocity. Shrubs and trees planted within the grids are protected by the straw until they take root. In areas where some water is available for irrigation, shrubs planted on the lower one-third of a dune's windward side will stabilize the dune. This vegetation decreases the wind velocity near the base of the dune and prevents much of the sand from moving. Higher velocity winds at the top of the dune level it off and trees can be planted atop these flattened surfaces.

Oases and farmlands in windy regions can be protected by planting tree fences or grass belts. Sand that manages to pass through the grass belts can be caught in strips of trees planted as wind breaks 50 to 100 meters apart adjacent to the belts. Small plots of trees may also be scattered inside oases to stabilize the area.

On a much larger scale, a "Green Wall," which will eventually stretch more than 5,700 kilometers in length, much longer than the famous Great Wall, is being planted in northeastern China to protect "sandy lands" deserts believed to have been created by human activity.

Research on the reclamation of deserts also is focusing on discovering proper crop rotation to protect the fragile soil, and on understanding how sand-fixing plants can be adapted to local environments.

If we are to stop and reverse the degradation of arid and semiarid lands, we must understand how and why the rates of climate change, population growth, and food production adversely affect these environments. The most effective intervention can come only from the wise use of the best earth-science information available.