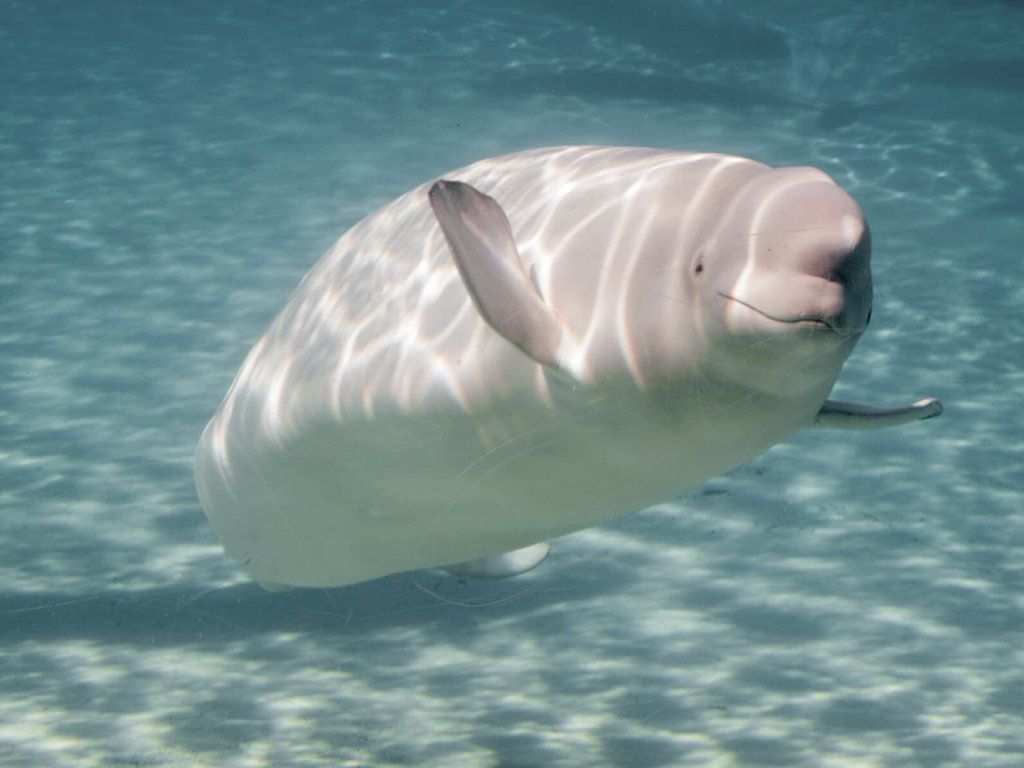 Although ‘melonhead’ and ‘sea canary’ may be some common nicknames for this unique ocean dweller, the beluga is most commonly referred to as the white whale. Belonging to the family Monodontidae, the beluga’s only other family member is the narwhal, and their appearance and physiology is a result of being adapted to life in the cold waters of the Arctic. Beluga populations are also found in the seas and coastal areas around Russia, Greenland and North America, though many do migrate from the Arctic ice cap to warmer estuaries and coastal waters during the summer.

Belugas are some of the most easily recognized ocean mammals; they’re entirely white and have a distinctive bulge at the front of their heads called a melon. Unlike dolphins, belugas don’t possess a dorsal fin. Reaching maturity at around 10 years of age, male belugas can reach 18 feet long and weigh up to 3,500 lb, while females are generally smaller, growing up to 13.5 feet in length and weighing as much as 2,600 lbs. Between 40% and 50% of their body weight is actually blubber (fat), providing excellent insulation from frigid Arctic water; in fact, they have the highest blubber percentage of any whale. Their body shape is stocky and rounded, with broad, short flippers and a curved tailfin.

The beluga’s coloration is actually a camouflage technique, allowing them to blend in with the ice to escape detection by their predators, which are mainly polar bears and orcas. Calves are born dark grey, and progressively lighten over the next 7 years as they mature.

Belugas are also the only marine mammal that shed their skin; during the winter, their outer epidermal (skin) layer becomes thicker and more yellowish, but during the summer, they rub themselves on riverbed gravel to remove the extra layer.

The anatomy of a beluga’s head is distinctive among other ocean dwelling mammals. The neck vertebrae are not fused, allowing them to move their head from side to side without needing to rotate their entire body; this helps when hunting prey and gives them better maneuverability in deeper water. Their beak (called a rostrum) has around 40 small, blunt teeth that are used to catch prey, and they have a single blowhole on the top of their head.

A beluga’s melon is extremely essential to its ability to accurately move through its ocean home and hunt. Their melon is a prominent bulge at the front of their head that contains an organ used for echolocation and communication. A beluga can actually focus the sounds they emit by changing the shape of its head. Belugas also use their head, along with their dorsal ridge, to help open up small holes in the ice through which they can breathe.

Belugas are the lazy divers of the whale world, typically not diving any deeper than about 20 m (66 feet), and they usually prefer to swim only at a depth that covers their bodies. They can stay underwater for 10-15 minutes, though a usual dive is usually much shorter than that, lasting around 3-5 minutes, and their heartbeat slows to between 12 and 20 beats per minute during a dive. They don’t jump out of the water like dolphins or killer whale relatives, and are slower swimmers too, being rather less aerodynamic marine mammals.

These beautiful whales have a very developed sense of hearing, which is also necessary for echolocation. They receive sound waves through their lower jaw, which are then transmitted towards their middle ear, and they can hear sounds within the range of 1.2 kHz to 120 kHz; to compare, we humans only have an average hearing range between 0.02 to 20 kHz. Their vision isn’t quite as spectacular, though they are able to see in and outside of water, and it’s likely that they can see some colors, since their retinas (surface covering the back of their eyes) contains cones. These ocean dwellers have no sense of smell, however.

Like other whales, belugas are very sociable and form small family groups called pods that can number anywhere from 2 to 25 members. They communicate with each other using whistles, trills and squawks, and their sounds are sometimes of such high frequency that they sound like birdsong. A pod is usually led by one male, but it’s not unusual for individual members to move from pod to pod.

Belugas seek out frequent physical contact with each other, they hunt in coordinated groups together, and they play chase and stage mock fights. They tend to be curious and investigative as well, often approaching humans in wild settings, swimming along boats, and playing with objects that they find in the water.

The type of diet that a beluga eats depends on the region in which they live and the season of the year. A typical diet is made up mainly of fish like cod, halibut, and Pacific salmon, as well as invertebrates like shrimp, squid, octopus, clams and sea snails. They search for food on the ocean floor or join with a group of other belugas to herd fish onto more shallow shoals.

Belugas reach breeding maturity by about four years of age, and females tend to birth one calf every three years or so. It’s not known if belugas can delay implantation of a fertilized egg, but gestation times can vary so greatly (anywhere from 12 to 15. 8 months after mating). Calves are born in warmer waters around bays or estuaries, and can swim by their mother’s side from birth, nursing every hour and staying dependent on her for the first year.

Although polar bears and killer whales are the beluga’s only natural threats, these whales are also affected by water pollution and hunt-to-capture expeditions which provide whales for marine exhibits worldwide.

Whaling by European and American whalers in the 18th and 19th centuries severely affected beluga populations, as they were hunted for meat, blubber, and oil from their melons. Belugas make easy prey because of a predictable migration pattern. Indigenous populations in the Canadian, Alaskan and Russian Arctic regions still hunt belugas for food and skin.

Belugas are listed as ‘near threatened’ by the IUCN, and are protected under the Marine Mammal Act in the USA.