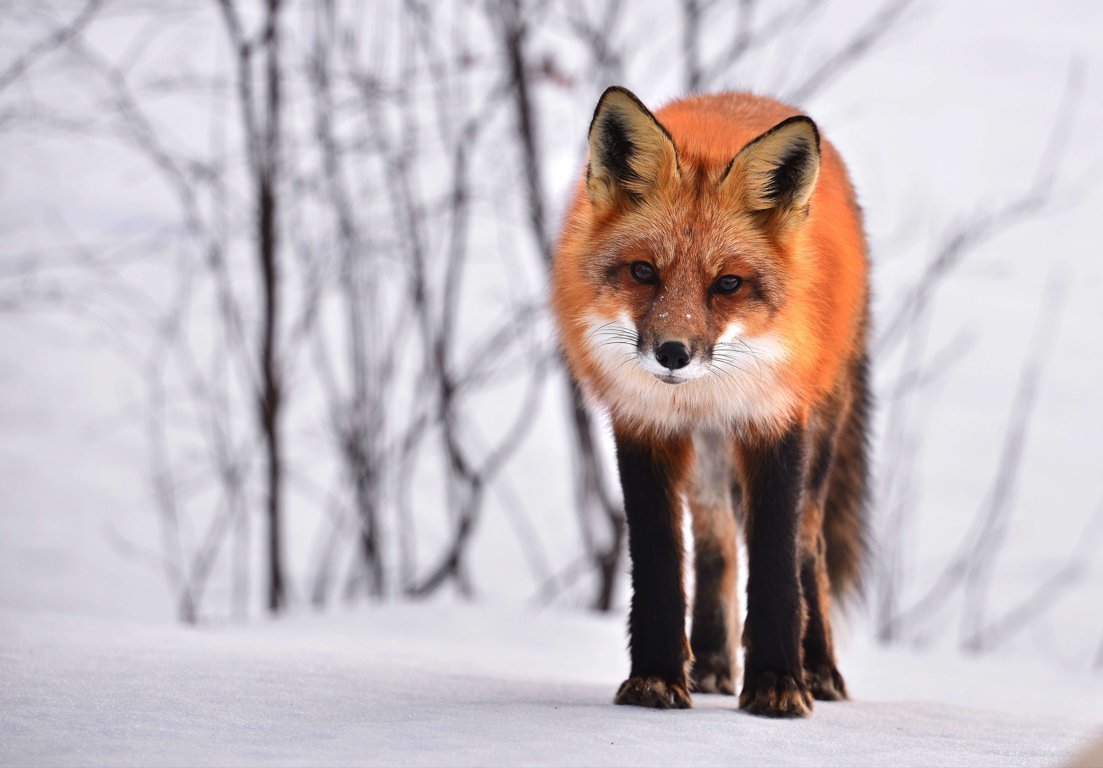 The fur ads we see in magazines and commercials portray fur coats as a symbol of elegance. But these ads fail to show how the original owners of these coats met their gruesome deaths. Approximately 3.5 million furbearing animals -- raccoons, coyotes, bobcats, lynxes, opossums, nutria, beavers, muskrats, otters, and others -- are killed each year by trappers in the United States. Another 2.7 million animals are raised on fur "farms." Despite the fur industry's attempts to downplay the role of trapping in fur "production," it is estimated that more than half of all fur garments come from trapped animals.

Some people believe that animals raised in captivity on fur "ranches" do not suffer. This is not the case. Trapping and "ranching" have both similar and disparate cruelties involved, and neither is humane. "Ranched" animals, mostly minks and foxes, spend their entire lives in appalling conditions, only to be killed by painful and primitive methods.

Approximately one half of the fur coats made in the United States and Canada come from captive animals bred, born and raised on fur farms. These operations range from family-owned businesses with 50 animals to large operations with thousands of animals. But regardless of their size or location, "the manner in which minks (and other furbearers) are bred is remarkably uniform over the whole world," according to one study. As with other intensive-confinement animal farms, the methods used on fur farms are designed to maximize profits, always at the expense of the animals' welfare and comfort, and always at the expense of their lives.

In the United States there are approximately 500 fur farms. About 90% of all ranched fur bearers are minks. Foxes, rabbits and chinchillas account for most of the remainder, though fur farmers have recently diversified into lynx, bobcats, wolves, wolverines, coyotes and beavers. All of these animals live only a fraction of their natural lifespans; minks are killed at about five months of age, and foxes are killed when they are about nine months old. Breeding females live somewhat longer. The animals' short lives are filled with fear, stress, disease, parasites and other physical and psychological hardships, all for the sake of an industry that makes huge profits from its $648 million-a-year sales.

Foxes are kept in cages only 2.5 feet square, with one to four animals per cage. Minks and other species are generally kept in cages only one by three feet, again with up to four animals per cage. This extreme crowding and confinement is especially damaging to minks, who are by nature solitary animals. A large portion of ranched minks develop self-mutilating behaviors, including pelt and tail biting, and abnormalities called "stereotypes" such as pacing in ritualized patterns. Foxes kept in close confinement sometimes cannibalize each other.

Minks, foxes and chinchillas are fed meat and fish by-products so vile that they are unfit even for the pet food industry. These animals are also fed minced offal, which endangers their health because of bacterial contamination. Newly weaned kits and pups are especially vulnerable to the food poisoning this diet can cause. Water on fur farms is provided by a nipple system from which the animals can drink at will...except, of course, when the system freezes in the winter.

As with other caged and confined animals, animals on fur farms are much more susceptible to diseases than their free-roaming counterparts. Contagious diseases such as Aleutian disease, viral enteritis and pneumonia are passed from cage to cage, and sometimes kill entire populations. Bladder and urinary ailments (wet belly disease) and nursing sickness (which kills up to 80 percent of all animals it infects, if not treated in time) are common. Animals are often infested with fleas, ticks, lice, and mites, and disease-carrying flies are a particularly severe problem because they are attracted to the piles of excrement that remain under the cages for months.

Fur farm cages are typically kept in open sheds that provide little protection from wind, cold and heat. The animals' fur helps keep them warm in winter, but summer is very hard on minks because they lack the ability to cool their bodies without bathing in water. Free-roaming minks spend 60 to 70 percent of their time in water, and without it their salivation, respiration and body temperature increase greatly. When minks learn to shower themselves by pressing on their drinking water supply nipples, mink farmers have been known to modify the nipples to cut off even this meager water supply.

No humane slaughter law protects animals on fur farms, and killing methods are gruesome. Because the fur farmers care only about preserving the quality of the fur, they use slaughter methods that keep the pelts intact but which result in severe suffering for the animals still quite attached to the pelts. Small animals can be shoved up to 20 at a time into boxes, where they are poisoned with hot, unfiltered engine exhaust pumped in by hose from the fur farmer's truck. Engine exhaust is not always 100 percent lethal, and some animals "wake up" while being skinned. Larger animals, including foxes, often have clamps attached to their lips while rods are inserted into their anuses, and are then very painfully electrocuted. Other animals are poisoned with strychnine, which actually suffocates them by paralyzing their muscles in painful rigid cramps. Gassing, decompression chambers and neck snapping are other common fur farm slaughter methods.

An archaic device used for centuries, the steel-jaw leghold trap is the most commonly used trap in the U.S. by commercial and recreational fur trappers today. Triggered by a pan-tension device, the weight of an animal stepping between the jaws of the trap causes the jaws to slam shut on the victim's leg, or other body part, in a vice-like grip. Most animals react to the instant pain by frantically pulling against the trap in a desperate attempt to free themselves, enduring fractures, ripped tendons, edema, blood loss, amputations, tooth and mouth damage (from chewing and biting at the trap), and starvation. Some animals will even chew or twist their limbs off, so common that trappers have termed this occurrence as "wring-off," which for them means the loss of a marketable pelt. To the animal left crippled on three legs, "wring-off" means certain death from starvation, gangrene or attack from other predators.

On land, leghold traps are most frequently set for coyote, bobcat, fox, raccoon, skunk and other furbearing animals. However, leghold traps are inherently indiscriminate and will trap any unsuspecting animal that steps foot into the trap jaws, including companion animals, threatened and endangered species, and even humans. Trappers admit that for every "target" animal trapped, at least two other "non-target" animals, including dogs and cats, are trapped.

Aquatic leghold traps are most often set for muskrat, otter, mink and beaver. Most animals trapped in water will either try to surface to gasp for air or will drag the trap under water in an attempt to reach land. Usually they die a slow, agonizing death by drowning, which can take up to 20 minutes for some species. Death by drowning has been deemed inhumane by the American Veterinary Medical Association (AVMA).

More than 80 countries have banned leghold traps, as well as several states. But most states continue to allow them, and some states still allow the use of teeth on leghold traps. An estimated 80% of the total number of trapped animals in the U.S. are taken by steel-jaw leghold traps, followed by wire snares and Conibear traps.

In November 1995, the European Union banned the use of leghold traps in all 15-member nations.

A national poll showed that 74% of Americans believe leghold traps should be banned.

Snares are categorized as either body/neck or foot snares. Like leghold traps, they are a primitive device, simple in design and vicious in action. They are generally made of light wire cable looped through a locking device or of small nylon cord tied so that it will tighten as the animal pulls against it. The more a snared animal struggles, the tighter the noose becomes, the tighter the noose, the greater the animal's struggle and suffering. The body snare is used primarily on coyotes and is often set where animals crawl under a fence or some other narrow passageway. The body snare is designed to kill the animal by strangulation or crushing of vital organs. However, snares do not discriminate between victims and will capture any animal around any body part.

While some small animals are thought to become unconscious in about six minutes when neck snared, larger animals can suffer for days on end. Trappers even have a term -- "jellyhead" -- that refers to the thick, bloody lymph fluid which swells the heads and necks of neck-snared canids. Snares frequently have to be replaced after each capture due to twisting and strain on the snare cable that results from animals struggling to free themselves.

Set on land and in water, snares are considered even more indiscriminate than the leghold trap. Because they are cheap and easy to set, trappers will often saturate an area with dozens of snares to catch as many animals as possible. Called "saturation snaring," this practice is common in Alaska where trappers attempt to target entire wolf packs through this reprehensible practice.

Even the Federal Provincial Committee for Humane Trapping has deemed the snare to cause too many injuries to be considered a "quick killing device."

The Conibear trap, named after its inventor Frank Conibear, consists of two metal rectangles hinged together midway on the long side to open and close like scissors. One jaw has a trigger that can be baited. The opposite jaw has a catch or "dog" that holds the trap open. Originally intended to be an "instant killing" device, the Conibear trap is designed to snap shut in a scissor-like fashion on an animal's spinal column at the base of the skull. However, because it is impossible to control the size, species and direction of the animal entering the trap, most animals do not die quickly in the Conibear trap...instead enduring prolonged suffering as the clamping force of the trap draws the jaws closer and closer together, crushing the animal's abdomen, head or other body part.

Domestic animals are frequent victims of this indiscriminate trap, especially the size 220 (7") Conibear. Numerous veterinary reports indicate that dogs and cats may be found dead or alive by their owners in these traps after suffering for days. However, because it is extremely difficult to open the trap jaws, most people are not able to free their companions in time.

Manufactured in three standard sizes, Conibear traps are frequently used in water sets to trap muskrat and beaver. In addition, they are used on land to trap raccoon, pine marten, opossum and other furbearers. Numerous research studies have shown that this trap does not kill instantly.

Every fur coat represents the intense suffering of up to several dozen animals, whether they were trapped or ranched. These cruelties will end only when the public refuses to buy or wear fur products and rejects the propaganda of trappers, ranchers and furriers whose monetary motives cause unjustifiable misery and death. Those who learn the facts about furs must help educate others, for the sake of the animals and for the sake of decency.