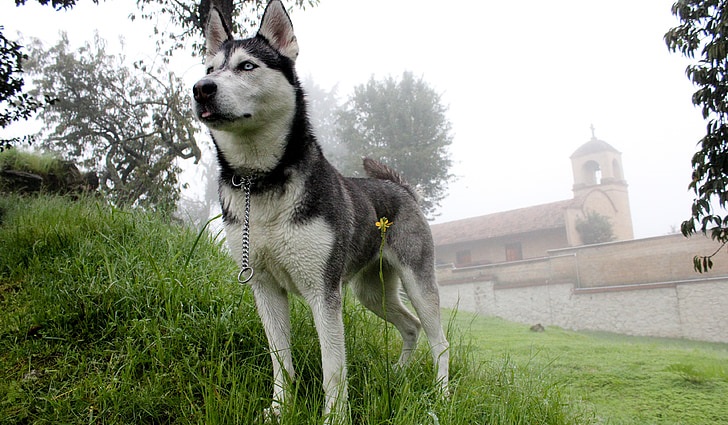 You must have seen those magnificent, wolf-like Alaskan huskies, pulling heavy sleds through heavy snow and blizzards – if not in real life, then in movies. Those super powerful, medium-sized dogs have already raised the bar for the perfect dog, and it’s not without any reason.

Being a working dog, the Alaskan husky is always up for activities. This athletic canine possesses a lot of stamina, confidence, and impeccable willpower, which makes it a perfect match for people with an active lifestyle.

At the same time, it values its family more than any other thing and loves spending time around its humans. If given proper attention and affection, an Alaskan husky makes an unbreakable and super-obedient bond with its owner, dedicating his life to keeping its owner safe and content.

Still, despite such amazing traits, we can’t say that this sled dog is suitable for all living conditions. Thus, to help you decide whether you should adopt an Alaskan husky as your family pet or not, here we’ve penned down all the required details. First things first, the Alaskan husky is not a specific breed with definite breed standards. Instead, all sled dogs fall into the same category. The breed was developed after crossing multiple northern breeds and are a close relative of the Siberian husky and Alaskan malamute.

The current form of Alaskan husky is also believed to be originated from the cross-breeding of ancient Alaskan huskies with Saluki and German shorthaired pointer dogs. At the same time, they are also considered spitz dogs having a wolf-like appearance.

Since the motive behind this cross-breeding was to develop working dogs. They are more famous and appreciated for their skills and performance than their looks. There’s most probably not any other dog breed that could endure harsh weather conditions as these dogs can.

Having a close resemblance with other spitz dogs, the Alaskan husky is often confused with them (especially with the Alaskan malamute and Siberian husky).

On the other hand, Alaskan Malamute is much larger than Alaskans. Now, returning to the Alaskan huskies, these dogs are all about activity and speed. Considering this, these dogs are not compatible with apartment living. Instead, they prefer living in large houses, having a super-wide area to exercise and roam around.

Their high need for exercise and activity may make them the best escape artist, but only when your dog is unhappy. A happy Alaskan won’t think of running away, even when not leashed or confined into a fenced property.

History of the Alaskan Husky

No one knows the exact place or date of Alaskan’s origin, but it’s believed that the very first dog was introduced to America by Siberian migrants about 4500 years ago.

Those breeders were actually up to developing a powerful, enduring, and strong-willed dog that can perform even the toughest tasks easily, like transportation, hauling logs, winning prize money in sled racing competitions, and delivering heavy supplies to long distances.

To attain desirable traits and unbeatable stamina, those breeders cross-bred various native breeds of that time to develop what we call huskies today. However, since some of those ancient native breeds have gone extinct, breeders today are using German Shorthaired pointers, Greyhounds, Siberian huskies, and Eskimo dogs.

Since Alaskans are not purebred dogs but selectively bred, mixed-breed dogs, they are not registered by American or Canadian kennel clubs. Another reason for them not being recognized by AKC is that they have so many variations in traits (both physical and behavioral).

All major kennel clubs consider Alaskan huskies are a dog category, not a dog breed. However, the dog registry of America has recognized Alaskan huskies.

As mentioned before, these dogs show great variation in their appearances and characteristics, owing to so many bloodlines. The distinctive features of Alaskans are their wedge-shaped heads, medium stature, pointed ears, curled tails, long muzzles, muscular legs, and thick fur.

Also, they have special snowshoes in the form of webbed, tough feet which help them run over snow, without slipping.

An Alaskan may grow up to 23-26 inches; however, the height may vary in males and females – females could be 1-2 inches shorter than males.

Most huskies, including Alaskans, feature double coats. The undercoat is not so dense but downy; however, the outer coat is smooth, shaggy, and of medium length. It is also worth mentioning here that the Alaskan husky’s coat is shorter, whereas that of purebred huskies is longer and fluffier.

The common colors you’ll find in Alaskan huskies are white and black. Also, Alaskan huskies mostly tend to feature coats in solid colors, which differentiate them from Siberian huskies.

Since Alaskans were developed to work in packs, they have strong packing instincts, which makes them friendly towards other dogs and strangers. Considering this trait, they don’t make good watchdogs.

Also, they can never withstand isolation and always wants to stay beside their owner. At first glance, one may think of these dogs as serious, aggressive canines, but no, they are highly affectionate. They won’t hesitate to jump into your bed to give you random warm hugs and cuddles.

However, they are not great companions for those who prefer solitude and silence. In a quiet room, these dogs may talk, whether the owner is present there or not. Yes, these Alaskan husky puppies talk for real, in the form of a wheezing sound and howls.

Not only do they need constant activity around them, but they also need their owner’s complete attention. Otherwise, they might show extremely destructive behavior.

Alaskan huskies are mostly gentle and trusted around kids and other animals. However, since they possess loads of energy, they might leap onto their owners, out of love and excitement. Considering this, this dog doesn’t also make a great companion for toddlers and elderly, infirm people.

Lastly, remember that even though an Alaskan husky dog is very loyal, its curious and mischievous personality may compel it to wander off and get lost. Therefore, while heading out with your Alaskan for long trips, don’t forget to put him on a leash first.

Since it’s not a purebred dog, an Alaskan husky is prone to several health problems, including progressive retinal atrophy, cancer, obesity, hip dysplasia, hypothyroidism,, and deformation of the larynx which induces a strange, wheezing sound.

To discard the risk of genetic problems, ask the breeder to show a health clearance certificate of the Alaskan husky puppy and its parent.

On the other hand, pay special attention to your dog’s diet and physical exercise to prevent other health conditions. Remember that you can extend the overall life span of your husky pup only by keeping his weight within a healthy range.

The good part here is that Alaskan husky dogs don’t come with insanely high grooming requirements. Their coats clean up themselves automatically with the natural body oils they secrete. Due to this very reason, they don’t smell filthy, even after not taking a shower in months.

However, to keep the coat smooth and well-textured, brush it twice a week to remove debris and dead hair. During the shedding seasons (which usually hits twice a year), brush their coats more frequently to prevent matting and suppress fur loss. Lastly, to ensure proper hygiene, trim nails, brush teeth, and clean ears regularly.

Yes, these dogs are smart enough to understand basic commands much earlier than other dog breeds, but it’s also true that these dogs might grow more headstrong and stubborn as they age. Therefore, it’s important to begin training an Alaskan pup from the very first day.

You might be surprised to know that these pups are trainable from a very young age of eight weeks. Just make sure you are using only the positive reinforcement training methods and showing patience.

Strangely, it’s easier to train a husky pup for pulling sleds than crate training and housetraining. However, if you’d be persistent enough and use the right, timely corrections, the whole training thing won’t take too long.

Most importantly, never exercise Alaskan huskies off-leash since they don’t know how to stay close to the owner.

Before you finally head out to purchase an Alaskan husky, you should note that this dog comes with vigorous exercise needs. Due to this, you’d need to take your husky on long strolls daily, if you want to keep them mentally and physically fit.

However, if you want to purchase a new husky pup, don’t forget to undertake proper vaccination, before letting them interact with other pets of your family.