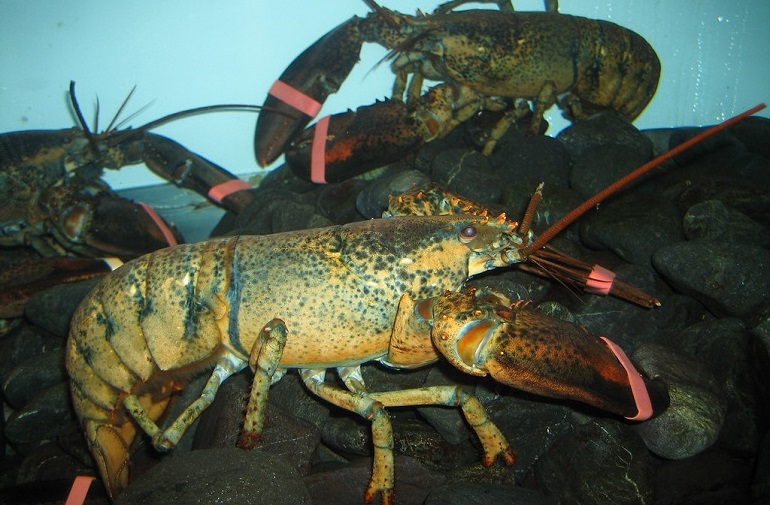 They are a type of shellfish that is often considered a delicacy. The cooked Lobster is usually served whole, with the meat extracted from the shell. Lobster is a popular seafood dish in many parts of the world, including the United States, Canada, Europe, and Asia.

Lobster has a wide range of health benefits due to its high protein and omega-3 content. Lobster is also a good source of vitamins and minerals, including zinc, copper, and selenium.

In addition, Lobster is low in calories and fat, making it an excellent choice for those looking to lose or maintain a healthy weight. They are also known for their anti-inflammatory properties, which can help to reduce the risk of diseases such as arthritis and heart disease.

They are versatile seafood that can be boiled in a variety of ways, making them a perfect addition to any meal. Whether you’re looking for a healthy seafood option or a delicious way to impress your guests, Lobsters are sure to please.

They are crustaceans that belong to the family Nephropidae. They are found in both saltwater and freshwater environments. They are cylindrical in shape and have a hard exoskeleton (lobster’s shell). Lobsters range in size from less than half an inch to over two feet long.

They can be either red or green in color. They have eight legs, each of which is equipped with a claw. A lobster is made up of two primary components. The first component, the cephalothorax, is frequently referred to as the Lobster’s body and comprises the cephalon (the head) and the thorax (the middle region).

It is protected by a hard shell known as the carapace. The abdomen, often known as the tail, is the second component that makes up a lobster. Stomata are the 14 segments that are fused together to form the cephalothorax.

Each somite has two appendages attached to various parts of the Lobster, typically on either side of the body or underside. The final section is split into a central telson with pairing uropods on either side. This is where the lobster tail fan is placed.

Homarus americanus, a member of the Nephropidae family, is also known as the American Lobster, Atlantic Lobster, or genuine Lobster. The dark greenish-brown European Lobster lives on the rocky seafloor of the Mediterranean and Atlantic coasts of Europe.

The family Palinuridae includes another variety of edible Lobster that belongs to the order Decapoda. These lobsters are known as rock or spiny lobsters. The spiny Lobster does not have huge claws like the American Lobster, which has spines all over its body and inhabits subtropical and tropical waters.

Dublin bay prawn is a slim, orange-pink lobster that grows up to 25 cm long, and is “the most important commercial crustacean in Europe.”

They are found in both saltwater and freshwater environments. They typically live in shallow waters near the coast. However, they can also be found in deeper waters, up to depths of 3,000 feet.

They prefer to live in areas with rocks or coral for shelter. They are scavengers that feed on tiny fish, crabs, and mollusks. They use their large claws to capture their prey. They are nocturnal animals that typically mate during the winter months.

An immature crayfish that have recently established on the bottom could have trouble locating gravelly material, so they instead choose to dig their burrows in pebble, sand, or clay.

In the first several years of a lobster’s life, the place to hide is actually at home. Younger lobsters that have recently arrived on the bottom must hide from predators. In contrast, older, young lobsters and adult lobsters that are bigger and more capable of defending themselves can leave their burrows to go on adventures.

Lobsters are capable of reproduction when they reach a certain size and age. They typically mate during the winter months. Female lobsters carry their eggs under their tail until they hatch.

Lobsters typically live for about 25 years. Lobsters grow throughout their lifetime, molting their hard exoskeleton as they get larger. They typically reach maturity after 5 to 7 years. Lobsters are nocturnal animals that typically mate during the winter months.

They prefer fresh food but consume almost anything they can get their paws on, including dead things. In addition, they have a history of catching shrimp, amphipods, or “sand fleas,” and even tiny fish. Although lobsters eat animal products, they will occasionally consume plants or sponges if available, such as in the spring.

A recently settled crab is the introductory course for a lobster in the fall in the Northumberland Strait, an area that makes up a significant portion of the southern Gulf of St. Lawrence. Cranks can provide up to 50% of the energy needed by lobsters in this area.

Wild lobsters can be found in deeper waters, up to depths of 3,000 feet. They prefer to live in areas with rocks or coral for shelter.

Some individuals think that they devour one another. This is a myth, in actuality. There is no evidence of lobsters consuming other lobsters in the wild.

This has been observed only when working closely with them to keep them in captivity. Because scientists discovered signs of lobster covers in the digestive systems they were researching, it was originally believed that they might be cannibals.

Later, it was found that this substance was the Lobster’s cover, which it had consumed after molts. A lobster may consume a portion of its old shell to absorb the calcium and enhance the developing new cover. They are nocturnal animals that typically mate during the winter months.

They can be caught using various methods, including lures, nets, and pots. Lobster hitches are the most common method of lobster fishing. Lobster traps baited with baitfish or other seafood are placed in areas where they are known to live.

When a lobster enters the trap, it cannot escape due to its shape. Lobster pots are similar to lobster entrapments but are made of wire mesh instead of wood. They can also be seized by hand.

When hunting for them, it is important to use a small net or bucket to avoid harming this crayfish. In addition, they should be placed in clean, aerated water as soon as possible after being caught.

They have a few predators, including humans, cranks, octopuses, and sharks. They are also sometimes eaten by seals and sea lions.

Between 50 and 800 CE, the Moche people of Peru were big fans of Lobster as a cuisine. In addition to being utilized as food, lobster shells were also made into tools, a bright pink dye, and ornaments.

Although its purpose has not been determined, a mass-produced lobster-shaped effigy vessel from this era attests to the Lobster’s popularity at the time. They can be cooked using a variety of methods, including boiling, steaming, baking, grilling, and broiling. A boiled lobster is brilliant red rather than dark green.