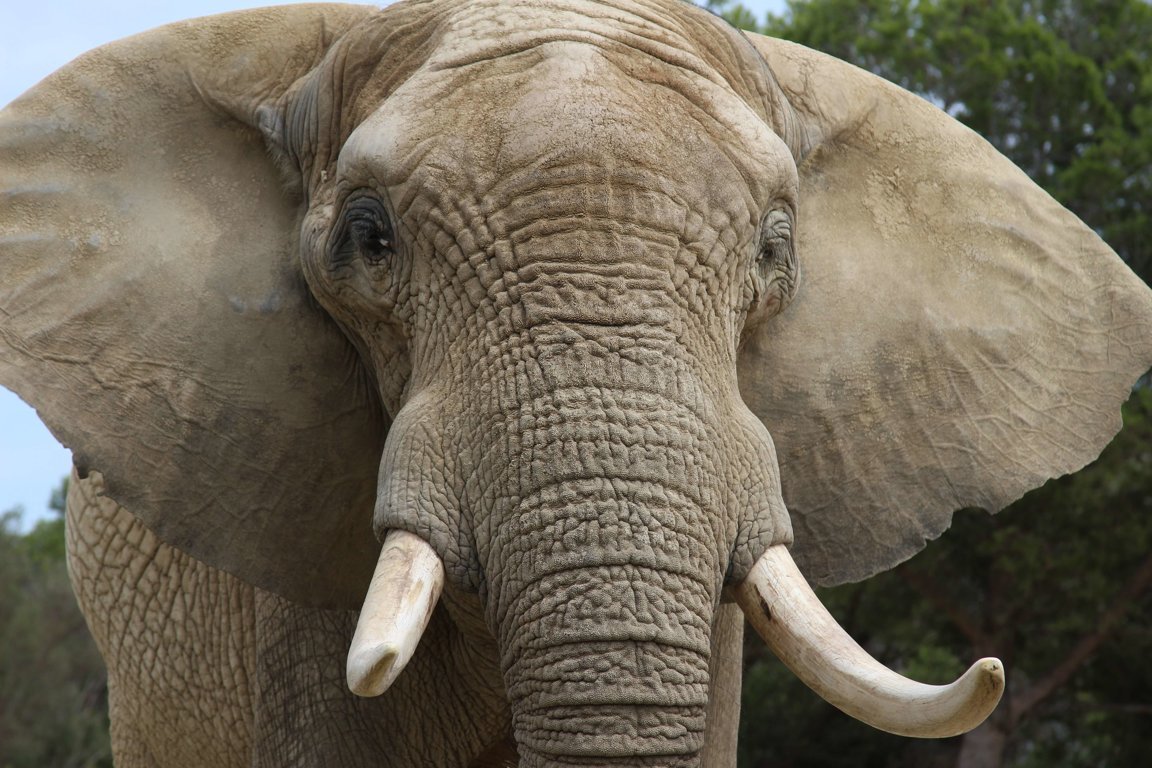 Centuries ago, the African elephant enjoyed ample representation among the teeming herds of wildlife that roamed the African continent. Today, their survival dangles on the precipice of extinction due to unchecked human population growth and overdevelopment. Once numbering in the millions, the continent-wide population in Africa is now estimated to be just under 600,000 elephants.

Elephants exist in one of the most complex societal units of any land mammal. A typical elephant herd consists of a matriarch, who is the leader and usually the oldest female in the group, her siblings and their offspring. The matriarch is the source of all information for the herd.

Throughout her years, she has learned where the best watering holes are, and which areas to avoid because of human presence. If the matriarch is killed by a hunter or poacher, her family suffers immensely and lacks the leader on whom they depend.

Baby elephants are born after an average of 22 months of gestation. They will normally stand within their first hour of life, and they nurse immediately from their mothers. The vital nutrients which can only be found in her milk help the development of the calf's immune system. Mothers and calves are rarely separated, and spend most of their time touching or in close physical contact. The other females in the herd often help raise the young elephant and can often be seen closing in around him to form an "elephant shield" if danger is present. The cousins, aunts, and sisters become the calf's guardians and form a family unit with impenetrable loyalty and devotion. Elephants have only one predator: humans.

Classified as threatened under the U.S. Endangered Species Act, and endangered under the International Union for the Conservation of Nature (IUCN) Red List of Threatened Animals, the most significant reason for their decline can be traced back to the 1800s when the precursor to the modern ivory trade began to take root. Nearly 200 years and millions of carcasses later, the future of the African elephant is in serious question.

The Convention on International Trade in Endangered Species of Flora and Fauna (CITES) is an international treaty that governs trade in wildlife. The signatory nations agree to abide by its regulations in order to conserve plants and animals found in their respective countries. As the global demand for ivory increased in the latter part of the twentieth century, the wild herds of African elephants were being decimated at an amazing rate. The rampant poaching of the late 1970s and mid-1980s reduced the population in Africa by half.

In 1989, the parties to CITES voted to ban the once-legal trade in ivory, realizing that unless it was brought to a halt, the African elephant would disappear. After the ban was in place, the price of ivory dropped so rapidly that demand fell and poaching decreased considerably.

Unfortunately, the thin cloak of protection afforded to the elephants would soon wear out completely. In 1997, under threats and pressure from Japan, which wanted to reignite ivory sales, the parties to CITES voted to allow Zimbabwe, Botswana, and Namibia to sell their ivory stockpiles (warehoused ivory taken from elephants who were hunted or died naturally) to Japan. An additional provision allowed the export of live elephants from these countries. New life was breathed into the illegal poaching cartel, and bodies of elephants with their faces hacked away once again appeared on the African savannah. Shortly after the 1997 CITES meeting, Ghana, which had not lost any elephants to poachers since 1988, experienced elephant poaching in Mole National Park. Poaching also increased in the national parks of Zimbabwe and Namibia, two of the proponents of renewed ivory trade.

The first African elephant to be taken from the wild to be used for human entertainment was named Jumbo. He made the journey from Africa to the London Zoo in 1865, and was later sold to P.T. Barnum, the infamous circus magnate. More than a hundred years later, elephants are still being used and abused in circuses all over the world.

Elephants in captivity lead miserable lives. In stark contrast to their natural tendency to roam several miles each day, they are bound in shackles and chains and forced to perform tasks that are the antithesis of their innate instincts.

For a short time, it was illegal to capture a wild elephant for use in a circus or zoo, but the CITES decision in 1997 changed all of that. In August 1998, 30 baby elephants were captured in southern Botswana and sold by the Botswanan government to Riccardo Ghiazza, a South African animal dealer. Although Ghiazza was accused of abusing the elephants and was charged with animal cruelty by the National SPCA, he exported three of the elephant calves to the Basel Zoo in Switzerland, and four calves to the Dresden Zoo in Germany. This sale was the first of its kind in recent history and illustrated the trend that would grow from the destructive weakening of protection for African elephants.

Elephant hunting is alive and well in several African countries. The most notable program exists in Zimbabwe. The CAMPFIRE program (Communal Areas Management Program for Indigenous Resources) is designed to give local villagers "benefits" from living with wildlife. These benefits come at the cost of animals' lives. An estimated 90 percent of CAMPFIRE revenues are gleaned from elephant trophy hunting fees, which are paid by wealthy westerners who want to bag the most notorious of the "Big Five" animals.

CAMPFIRE is funded largely by the U.S. Agency for International Development (USAID), which receives tax dollars from U.S. citizens through congressional appropriations. A portion of USAID's support is funneled through the World Wildlife Fund (WWF) to administer this trophy hunting program. CAMPFIRE has come under continuous fire for corruption and misappropriation of funds. Other countries which encourage and promote trophy hunting of any animal, endangered or otherwise, include Namibia, South Africa, Mozambique, Botswana, and Tanzania. Kenya and Uganda prohibit hunting of any kind within their borders.

Some conservation organizations who claim to be saving the African elephant, are actually lining up to participate in their demise. WWF, for example, directly benefits from the existence of CAMPFIRE and receives federal dollars for their involvement. The African Wildlife Foundation believes that "CAMPFIRE is essential to meeting our conservation goals," and the National Wildlife Federation believes that "CAMPFIRE is consistent with NWF's common-sense approach to human development and wildlife conservation." With the weight of lofty annual budgets and international recognition, these organizations continue to damage efforts to save what is left of the magnificent African elephants.

If you are going to visit Africa, do not patronize countries such as Zimbabwe, Botswana and Namibia, which have demonstrated their tenacity for exterminating elephants on their soil. Instead, choose to spend your tourist dollars in elephant-friendly countries such as Kenya and Uganda.

Write to the conservation organizations that you want to support and ask them about their policies regarding elephants. Do they support trophy hunting? Do they support the ivory trade? What is their position on exporting live elephants to zoos and circuses? Spend your well-intentioned donation wisely.