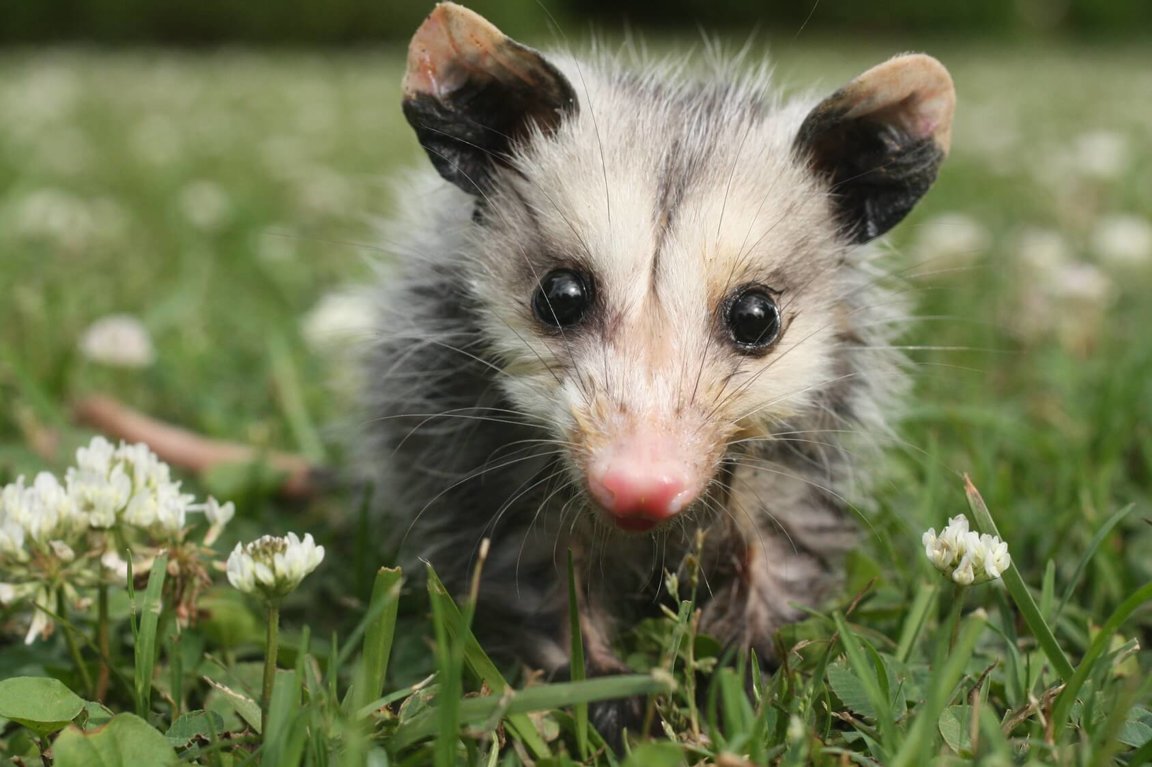 Do you intend to keep an opossum as a pet?

Oh, how wonderful! But before you bring this playing possum home, allow us to provide some interesting information about opossums that will be very helpful to you.

So let’s get going!

Opossums are solitary animals, and you rarely see them together unless it’s a breeding season or a female with her young. They don’t hibernate, and opossums are the only marsupial in North America and Canada.

Most people know them as the animal that “plays dead.” The scientific name for the opossum is Didelphis virginiana. Opossums, which are sometimes referred to as possums in Latin America, come in a number of different species.

The Virginia opossum, also known as the common opossum, is noteworthy because it is the only mammal (pouched mammal) found in the USA.

Opossums are about 2 feet long, including their tail, and they weigh between 8 and 13 pounds. They have gray fur, a long snout, and black eyes. Their tails are prehensile, meaning they can use them to grasp things. Virginia Opossums are found throughout the eastern United States and in Mexico. They are most common in forests and woodlands but can also be found in urban areas.

Opossums reproduce via internal fertilization. The female has a pouch on her belly, where the baby opossums, or joeys, live after birth. After about two months, the joeys leave the mother’s pouch and ride on the mother’s back. They are independent at around four to five months old.

Females give birth to litters of anywhere from one to 13 joeys, but the average litter size is seven. Baby opossums are about an inch long and weigh less than an ounce at birth.

After mating, the male opossum will move on and play no role in raising the young, instead, the female is responsible for finding food and shelter for her young. Opossums typically only live for about two years in the wild. However, captive opossums have been known to live up to four years.

Opossums are interesting creatures that are unique to North America. They are relatively easy to care for, but they do require some specific housing and diet requirements. If you’re thinking of adding an opossum to your family, be sure to do your research first!

Despite their scavenger behavior, opossums are actually relatively clean animals. They groom themselves regularly and will often use their tail to help them clean their fur.

In captivity, opossums can be fed a variety of foods, including commercially prepared pet food, fruits and vegetables, cooked meat, and bugs. It is important to offer a variety of foods to ensure your opossum is getting all the nutrients it needs.

As with any animal, it is important to do your research before adding an opossum to your family. Be sure you are prepared to provide the proper housing, diet, and care for your new pet. Opossums can make great pets for the right family!

The opossum is a medium-sized, marsupial mammal that is found in North America. The opossum has a gray body with white fur on its face and tail. It has black eyes and a long snout. Opossums range in size from 2 to 3 feet long and weigh between 8 and 13 pounds.

Opossums are found throughout the eastern United States and in Mexico. They are most common in forests and woodlands, but can also be found in metropolitan areas. Opossums are nocturnal animals, so they are mostly active at night.

If you live in an area where opossums are common, there are a few things you can do to prevent them from becoming a nuisance. First, make sure that your trash cans are sealed tightly and that any food scraps are properly disposed of.

Opossums are attracted to garbage cans and will often rummage through trash cans in search of food. Second, keep your yard clean and free of debris.

Opossums like to nest in woodpiles and other cluttered areas. If you remove these potential nesting sites, it will be less likely for opossums to take up residence in your yard.

Finally, if you have pets, make sure they are properly vaccinated and kept indoors at night. Opossums can carry diseases that can be harmful to pets, so it’s important to take precautions. If you do find an opossum in your yard, there is no need to panic. These animals are generally harmless and will usually move on if they feel threatened.

As mentioned above, keeping your yard clean and free of debris will help deter opossums from taking up residence. You should also seal any holes or cracks in your foundation or exterior walls.

Opossums can squeeze through surprisingly small spaces, so it’s important to make sure they can’t get into your house. If you have pets, keep them indoors at night. This will help protect them from potential predators, including opossums.

Opossums are useful as carrion and rodent eaters in metropolitan environments. Additionally, they remove any leftover food that could otherwise attract mice and rats. Wilderness biologists are worried about how introduced opossums are affecting native invertebrates, small mammals, amphibians, reptiles, ground-nesting birds, nestlings, and eggs in rural regions.

Opossums are not dangerous as long as they are kept away from human homes, are not cornered, and have little contact with pets. If an opossum enters your home, keep your cool, lock any nearby inside doors, leave the area, and allow the animal to escape by the pet door or an unlocked door or window. If necessary, carefully corral the opossum outside with a broom. Avoid provoking an opossum to defend itself by cornering it.

An opossum looking for food can come across a chicken coop, rubbish can, or vegetable garden. An attic, chimney, or crawl space can become the object of its hunt for a den site. The best strategy to avoid confrontations is to change the local environment so as not to attract opossums. Opossums may attack dogs and cats if they are cornered. Opossum bite wounds can cause fractures and disease spread.

Opossums are generally considered to be harmless animals, but they can carry diseases that can be harmful to humans. These diseases include rabies, salmonella, and leptospirosis. Opossums are also known to host fleas, ticks, and mites. These parasites can cause skin irritation and spread disease.

If you come into contact with an opossum, it’s important to wash your hands thoroughly afterward. If you are concerned about an opossum on your property, your best course of action is to contact a wildlife control expert for assistance. These professionals will be able to safely remove the animal and take steps to prevent it from returning.

Opossums may transmit several diseases that may be potentially harmful to humans, but it is unclear whether they play a part in the spread of any of these illnesses. Rubber gloves should be worn when handling an opossum, whether it be alive or dead. Afterward, thoroughly wash your hands.

Although there are no surefire ways to avoid exposure to this parasite, horse owners can reduce risks by making their facilities less appealing to opossums. Food that opossums might find alluring should be eliminated or covered up, such as cat food left out, grain sitting in buckets, feed in uncovered bins, and trash in open cans.

Before giving feed to your horses, inspect them for droppings if it has been exposed. If someone gets bit or scratched, clean the wound right away by cleaning it well with soap and water. Give the wound lots of water. All opossum-related injuries should be examined by a doctor.

Finally, if you find an opossum on your property, don’t try to capture or kill it. These animals are protected by state and federal law, and it is illegal to harm them. If you are concerned about an opossum, your best course of action is to contact a wildlife control expert for assistance.

Opossums frequently make their dens in chimneys, attics, and the areas under porches, houses, and sheds. Use boards, metal flashing, or 14-inch mesh hardware cloth to block off any potential openings. To keep mice, rats, and other mammals out, make sure that all connections are flush and tight. When you close off a potential entry, be careful about the animal trapped inside.

Use a live trap with a single or double door if you need to capture an opossum. Use sliced apples or other fruit, cracked-boiled eggs, or vegetables to avoid luring tiny dogs or cats. Set the trap in the area where the animal or animal evidence has been sighted.

We hope this article has helped you out in getting to know about these tiny creatures. Keep visiting us for more information.