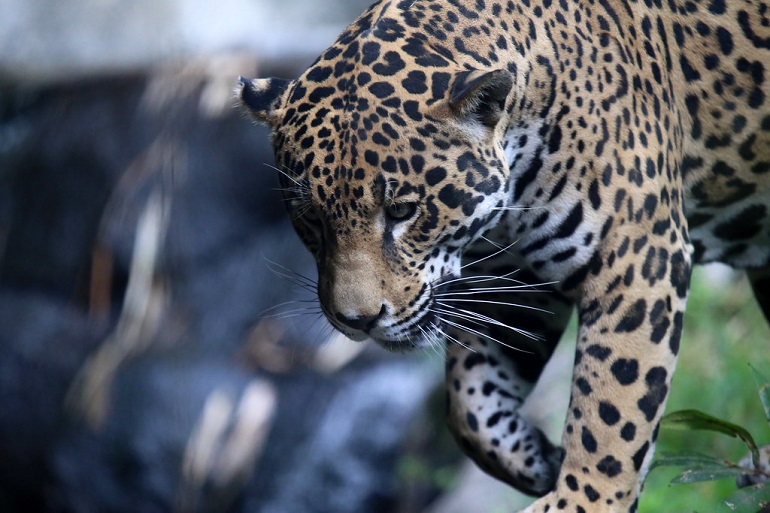 The South American indigenous name for the jaguar is “yaguara,” which means “an animal that kills with one leap.”

Jaguars are the third biggest cat in the world and are native to Central and South America. Jaguars have reddish brown fur with black spots and weigh anywhere from 100 to 230 pounds. They’re known for their strength, agility, and intelligence. Most jaguars live in dense rain forests where they can stalk and ambush prey. Jaguars are also one of the few big cats that swim well. Learn more about Jaguars in this blog post.

The jaguar is a large cat species of the Felidae family and the only extant member of the genus Panthera (which includes leopards and mountain lions). The jaguar’s present range extends from the Southwestern United States and Mexico in North America, across much of Central America, and south to Paraguay and northern Argentina in South America.

Though single cats now live north of the Amazon River, in Guyana, Suriname, and French Guiana, their range has receded. It no longer reached the United States since the early 20th century. The jaguar is an apex predator, a solitary stalk-and-ambush predator, instead of chasing prey.

The jaguar is perhaps best known for its spotted coat. The spots vary between individual cats and groups of related individuals but are commonly black or dark brown on a tawny background, often with dark rosettes. Some individuals are nearly unmarked. The spots on the head and neck are generally solid, as are those on the tail, where they may merge to form a band. Jaguars with melanism (black jaguars) occur regularly and seem more common in dense forest habitats.

The black jaguar (Panthera onca peruviana) is a melanistic form of the jaguar, having a black coat occurring mostly in the dense forest habitats of South America. It is listed as Near Threatened on the IUCN Red List because it is estimated that there are fewer than 2,500 mature individuals in the wild.

While melanism is hereditary in a big cat, unlike a pet cat, it does not appear to be linked to any fitness advantage. Black jaguars may suffer from a higher rate of genetic defects due to inbreeding among small populations.

The jaguar is a big cat, the only member of the Panthera genus that is not a lion, tiger, leopard, or snow leopard. Jaguars are the largest cats in the Western Hemisphere and the third largest in the world. With its black spots and reddish-brown coat, the jaguar is easily recognizable. It is a solitary creature often found near water sources, such as rivers and streams.

The jaguar is a large cat with a robust build and a short, stocky tail. It has a relatively large head, powerful jaws, and strong teeth for its body size. The coat is generally a tawny yellow but can range to reddish-brown, with black spots distributed evenly across the body. Melanistic jaguars are also known as black panthers.

Jaguars are found in the rainforests of South and Central America. They live in Mexico, Peru, Bolivia, Argentina, and Brazil. They also live in woodlands, swamps, and grasslands.

The jaguar is a stalk-and-ambush predator and pursues a wide variety of prey. Its diet primarily comprises terrestrial mammals, such as deer, pigs, tapirs, and peccaries, but it will also take fish, reptiles, birds, and amphibians when available. Like all cats, the jaguar is an obligate carnivore that must consume animal flesh to survive.

Jaguars reproduce via sexual reproduction. The jaguar mating season occurs between May and August, with the female giving birth to a litter of one to four cubs about two to three months later. Jaguar cubs are weaned at around six months old but remain with their mothers for up to two years, learning how to hunt and survive in the wild.

Jaguars typically live for around 12 to 15 years in the wild, although some individuals have been known to reach 20 years of age. In captivity, jaguars can live for up to 23 years.

The jaguar is a largely solitary animal and is very difficult to observe in the wild. The jaguar is a largely elusive forest creature seldom seen in the open, preferring densely wooded regions for stalking its prey. Consequently, much of what is known about this Panthera species comes from tracking individuals in captivity.

Although jaguars are mostly nocturnal hunters, they may also be seen during the day and spend most of their time alone. They are very good swimmers and climbers.

Jaguars are among the big cats (lion, tiger, leopards) that can roar. A male jaguar roar is deeper and more menacing than the female, who makes a coughing roar.

A jaguar’s hunting technique is often compared to tigers, as they both use ambush as their primary method of prey capture. Both species hunt alone and stealthily stalk their prey until they are close enough to pounce.

However, jaguars tend to be more aggressive and often kill their prey with a single bite to the skull rather than suffocating them. The jaguar is known to prey on livestock in areas where wild prey is scarce, such as cattle ranching areas.

The jaguar has an exceptionally powerful bite relative to the other cats. This allows it to pierce the shells of armored reptiles like turtles and to employ an unusual killing method: it bites directly through the skull of prey between the ears to deliver a fatal crush to the brain. The pressure exerted by the jaws of a large adult jaguar generates a force of 3000 lbf (13,000 N) between the canine teeth.

The jaguar is an apex predator in its native habitat and has no natural predators apart from humans. The International Union for Conservation of Nature (IUCN) now lists the jaguar under its “Red List” of endangered species.

The animal is listed as “Near Threatened,” which means that it is not currently endangered but could become so in the future. Its numbers are declining, and the threat to its survival comes from the loss of habitat and fragmentation of populations.

Commercial fur hunting, particularly in the 1960s, had a devastating impact on jaguars. The sale of jaguar skins internationally is now prohibited by the Convention on International Trade in Endangered Species (CITES). Though it is illegal to trade, jaguar coats are still being bought and sold in countries where these animals reside.

Conservation efforts are underway to help protect this amazing animal, but much more needs to be done to ensure the jaguar’s long-term survival.

The jaguar is a beautiful, powerful, and dangerous animal. It is an important part of the ecosystem in its native habitat. The jaguar has been an important animal to many indigenous peoples of the Americas, often associated with shamanism and religion. The jaguar is also a popular culture icon in Latin America, featured in books, films, and video games.

However, its numbers are declining due to habitat loss, fragmentation, and hunting by humans. The largest population of jaguars exists in the Amazon rainforest and is almost extinct in the native range. Conservation efforts are necessary to protect this magnificent species.