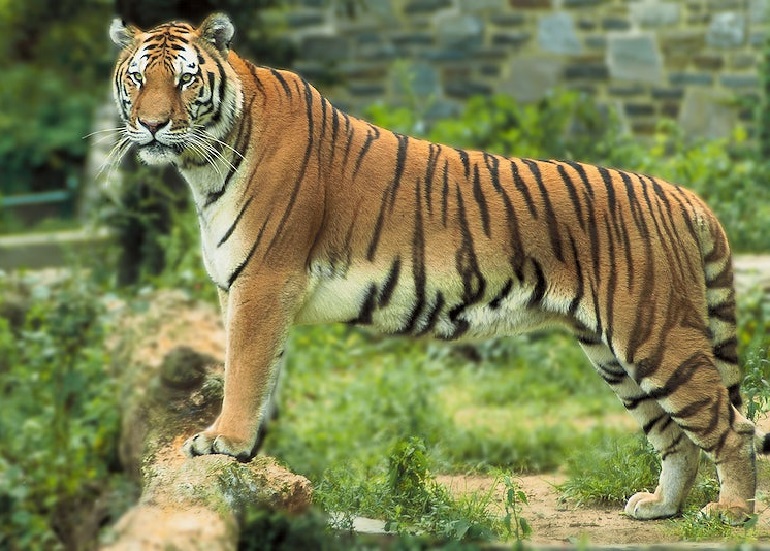 The tiger is one of the world’s most feared and revered animals. Tiger is the largest cat family known for its strength, power, and agility. Tigers can be found in various habitats, including forests, grasslands, and even deserts. While they typically live alone, tigers will sometimes form small groups called “coalitions.”

Tigers are apex predators, meaning they sit at the top of their food chain and have no natural predators. Despite their fearsome reputation, tigers are quite delicate animals and face several threats in the wild. Thankfully, many conservation organizations are working to protect these beautiful creatures.

This blog post will take a closer look at tigers and learn some interesting facts about them. We’ll also discuss the threats they face and what we can do to help preserve their population. So read on to learn more about tigers!

The tiger, Panthera Tigris, is the largest of all living felids and reaches a total body length of up to 3.38 m (11.1 ft) over curves. It has a tail that is as long as 1 m (3.3 ft) and possesses razor-sharp claws that can grow to 10 cm (4 in). The Bengal and Siberian tigers are the tallest cats regarding shoulder height.

The tiger’s coat is orange with black stripes, and it has white on its chest. Its pelage is exceptionally dense and heavy, particularly during winter when the tigers sport an especially thick coat composed of wooly underfur and longer guard hairs. The combination of camouflage, stealth, and power has made the tiger one of the most feared predators in the wild.

The tiger is the national animal of many countries, including India, Malaysia, Bangladesh, and South Korea. Being an apex predator, its diet primarily consists of large ungulates such as deer, boar, and antelope. Occasionally, it preys on smaller animals such as monkeys, hares, and birds.

In captivity, tigers are typically fed a diet of meat, bones, and organs. A tiger can eat up to 60 pounds of meat in one night! With these prey items, the tiger largely satisfies its dietary requirements for protein and fat.

However, due to the declining populations of large ungulates in much of its habitat, the tiger must increasingly turn to livestock and other domestic animals for sustenance. This often conflicts with humans and has resulted in a widespread decline in tiger populations across Asia. Today, the global population of wild tigers is estimated to be between 3,000.

All tigers have orange fur with black stripes, although the specific pattern of stripes varies from one individual to the next. A tiger’s stripes act as camouflage when the tiger is hunting in tall grass. The combination of their coats and powerful build makes tigers some of the world’s most distinctive and recognizable animals.

Tigers live solitary lives in the wild except for a brief period during mating season. Male tigers will establish territories that overlap with several females’ territories and fight fiercely to defend these boundaries.

Tigers are mostly nocturnal hunters, using their incredible strength, agility, and stealth to ambush prey. Tigers live alone or in small groups called “ambushes.” A group of ambushing tigers is called a “streak.”

During the day, tigers rest in cool places such as caves or under trees. At night, they go out searching for food. Tigers are good tree climbers. They can also jump up to 16 feet high and run fast (up to 35 miles per hour). When a tiger wants to hide, it sinks into the tall grass so that only its head and eyes are showing.

Tigers are found in various habitats, from dense forests to swampy mangrove forests, but they are most commonly associated with the jungle. They are mostly found in South and Southeast Asia, with small populations in India and Russia. Tigers have been known to travel long distances in search of food and mates, and they have been known to swim for miles.

Lion Vs. Tiger: Which Is the More Dominant Predator?

There are many debates among animal experts about which predator is more powerful and dominant: the lion or the tiger. Both animals are large cats with sharp claws and teeth, but they have some key differences.

For example, lions live in social groups called pride, while tigers are solitary hunters. This means that a lion has to cooperate with other lions to take down prey, while a tiger can work alone. In addition, lions typically hunt during the day, while tigers are most active at night.

So, which big cat is the more dominant predator? It’s difficult to say definitively, as both lions and tigers have unique strengths and abilities. However, many experts believe that tigers have an edge over lions regarding power and hunting ability.

Do you agree? Let us know in the comments below!

How Long Do Tigers Live?

Tigers can live for up to 20 years in the wild, but most only live for 10-15 years due to hunting and other causes of death. In captivity, tigers often live much longer, with some individuals reaching the age of 30 or more. Female tigers tend to live slightly longer than males.

How Big Do Tigers Get?

Tigers are solitary animals, and they reproduce via copulation. The females are only receptive to males for a few days out of the year, and when they are ready to mate, they will make it known by leaving urine deposits and scratch marks on trees. Male tigers will often fight over a chance to mate with a female, and the victor will mate multiple times for several days.

After a gestation period of around 16 weeks, the female tiger will give birth to a litter of up to seven cubs. They weigh only about 2 pounds at birth. The tiger cubs are born blind and helpless and will rely on their mother for food and protection for the first few months of their lives.

After about 18 months, the cubs will be independent enough to strike out independently. Tigers are ferocious hunters, but they are also gentle parents.

The population of tigers has been declining rapidly over the past few decades due to various threats. Tigers are critically endangered species, with their population declining by as much as 95% over the last century.

The primary threat to tigers is the destruction and degradation of their habitats. Tigers require large expanses of land to roam and hunt effectively. As human populations have increased, natural habitats have been converted for agricultural, industrial, or urban use. This has led to the fragmentation of once continuous tracts of tiger habitat.

A decline in the number of tigers’ natural prey species also poses a significant threat to the big cats. As human populations have increased and land has been converted for development, wild ungulate populations (deer, pigs, and buffalo) have declined in many areas. This has led to an increase in tiger-human conflict as tigers are forced to hunt livestock for food.

When people and wildlife compete for the same resources, it’s called human-wildlife conflict. Competition for space and resources often leads to conflict. As human populations have increased, we have encroached on tiger habitat. This has led to more frequent encounters between tigers and humans, resulting in property damage, livestock loss, and even human injury or death.

Poaching is another major threat to tigers. Tigers are poached for their skin, bones, and other body parts used in traditional Chinese medicine. In some cases, tigers are killed for sport. The illegal wildlife trade is a multimillion-dollar industry, and tigers are highly sought-after by wildlife traffickers.

Climate change is one of the most significant global threats to tigers and other wildlife. As temperatures rise and weather patterns become more erratic, it is becoming increasingly difficult for wildlife to adapt. Tigers are particularly vulnerable to the effects of climate change as they rely on a stable environment to hunt and raise their young.

What Is WWF Doing?

WWF is working to protect tigers and their habitat through various conservation initiatives. They are supporting the efforts of ranger patrols to crack down on tiger poaching, working with governments to improve anti-poaching laws, and helping to create protected areas for tigers.

They are also working to engage local communities in tiger conservation and raise awareness about the importance of saving these majestic animals. You can help save tigers by supporting their work.

One of the best ways to protect tigers is to understand their numbers and behavior. It is also one of the most endangered, with numbers dwindling to as few as 3,200 in the wild.

Tigers are illegally traded for their parts used in traditional Chinese medicine. WWF is working to shut down the tiger trade by engaging with key stakeholders, including law enforcement officials, businesses, and consumers. It is also working to raise awareness about the tiger trade’s negative impact and promote alternative medicines.

Tigers need large areas of habitat to survive. WWF is working to protect and restore tiger habitat through various initiatives, including forest Stewardship Council certification, REDD+ projects, and landscape-level planning. They are also working with local communities to help them better manage their natural resources and reduce the pressure on tiger habitats.

Despite the many threats tigers face, many efforts are underway to protect these magnificent cats. Numerous NGOs and government agencies are working to raise awareness about the plight of tigers and implement conservation strategies.

In 2010, world leaders gathered for the Tiger Summit in St. Petersburg, Russia, where they committed to doubling the wild tiger population by 2022. While this goal may seem ambitious, it is possible with continued commitment and action.

Tigers are iconic species and play a vital role in the health of ecosystems. However, their populations have declined rapidly in recent years due to various threats. Habitat loss, prey depletion, conflict with humans, and poaching are the main reasons for the decline in tiger numbers.

Although the situation looks bleak, many efforts are underway to protect these magnificent animals. With continued commitment and action, we can make a difference for tigers.

Please help support tiger conservation efforts! You can do your part by spreading the word about the importance of saving these animals and donating to organizations working to protect them. Tigers need our help!