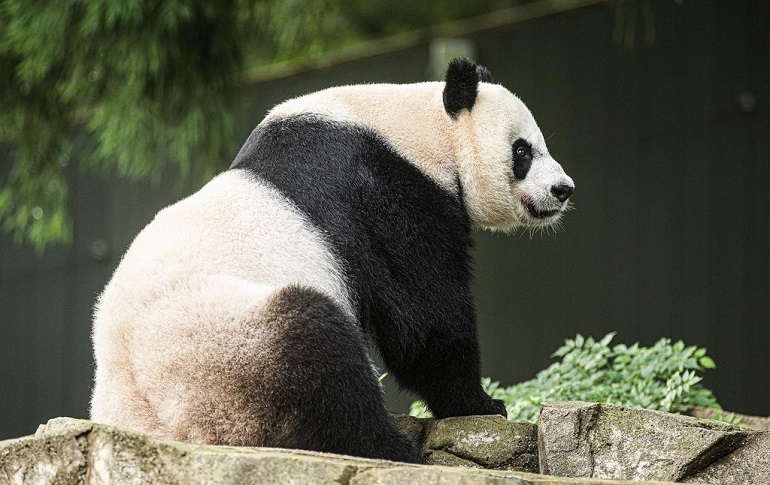 The giant panda, also known as the panda bear or simply the panda, is a bear native to south central China. It is easily recognized by its large, distinctive black patches around its eyes, over the ears, and across its round body.

Though it belongs to the order Carnivora, the giant panda’s diet is over 99% bamboo. Giant pandas in the wild will occasionally eat other grasses, wild tubers, or even meat from birds, rodents, or carrion.

One of the rarest creatures in the world, the big panda, often known as the panda, dwells high in dense bamboo woodlands in the misty, rainy highlands of southwest China. These black-and-white bears are extremely rare; about 1,500 remain in the wild.

The physical traits of giant pandas do not convey visual cues. Due to their short tails, they are unable to flag signals to other giant pandas. Their ears aren’t flexible enough to cock forward or flatten, and they lack a crest or mane to raise.

Where Do Pandas Live

The giant panda lives in a few mountain ranges in mid-China, mainly in Sichuan province and Shaanxi and Gansu. However, due to farming, deforestation, and other development, the giant panda has been driven out of the lowland areas where it once lived.

The big panda is a terrestrial animal and primarily spends its life roaming and feeding in the bamboo forests of the mountains. It is generally sedentary, feeding on bamboo 10–16 hours a day. When not eating or sleeping, it may engage in such behavior as climbing trees, walking on all fours, or sunbathing.

Almost exclusively, bamboo shoots and leaves are consumed by pandas. They occasionally consume fish, other types of plants, or small mammals, but bamboo makes up the majority of their diets.

Pandas spend roughly 12 hours a day eating, which they do quickly and in large quantities. They only digest roughly a fifth of what they eat. Bamboo is not extremely nutrient-dense overall.

What Do Giant Panda Eat

The giant panda’s diet consists almost entirely of various bamboo species’ leaves, stems, and shoots. Giant pandas eat 25 kinds of bamboo, though they prefer 8 or 9 varieties. Bamboo comprises 99% of their diet, and the rest is water.

Pandas consume an average of 40 pounds (18 kilograms) per day—approximately 10% of their body weight. They take in such a massive amount of food because bamboo is very low in nutrients.

Giant pandas have large molar teeth and strong jaw muscles for crushing tough bamboo. But their stomachs are relatively small for carnivores, holding about 0.5% of their body weight—about the same as a human stomach. So to digest all that tough bamboo, giant pandas have gut bacteria similar to those found in cows.

Even with this specially adapted digestive system, giant pandas still only absorb about 30% of what they eat. To make up for the low nutrition they get from bamboo, they must spend 10–16 hours each day eating—roughly 28 pounds (12.7 kilograms) of bamboo. As a result, so few pandas are left in the wild because they can’t find enough food to sustain them.

Other Interesting Facts About Giant Pandas

However, mating does not always occur every year because of the low number of potential mates in the wild. After a gestation period of 95 to 160 days, female pandas give birth to one or two offspring, although twins are more common in captivity.

Giant pandas have been known to attack humans in self-defense or if startled. However, these attacks are relatively rare, and most giant pandas interacting with humans behave peacefully.

According to the National Zoo, there have only been three recorded incidents of captive giant pandas harming a human. In all three cases, the animals were later found to be sick or suffering from some type of psychological distress.

In 2006, a man was mauled by a giant panda at a zoo in China after scaling a wall to get into the enclosure. The victim survived but sustained serious injuries.

In 2009, another man was killed by a captive giant panda in China after entering the animal’s enclosure.

In 2012, a 3-year-old girl was bitten by a giant panda at a zoo in Washington, D.C. The child was not seriously injured, and the animal was not deemed to be aggressive.

Though attacks by giant pandas are rare, visitors to zoos and reserves should take caution when interacting with these animals. It is important to remember that giant pandas are wild animals and should be treated as such.

The giant panda is generally solitary, although it has been known to form bonds with others of its kind. Males and females will come together only during the breeding season.

The fragrances could either assist the big pandas to come together or separate them, depending on who reads the mark. The scent marks that are unexpected will typically be enough to make a potential intruder walk away outside of breeding season.

But during the breeding season, a female’s scent marking signals her readiness for sexual activity and attracts males to her. A male’s fragrance that a woman loves and has previously encountered increases her likelihood of accepting him.

Giant pandas reach sexual maturity between the ages of 4 and 8, and females may give birth to two litters in a lifetime. The gestation length is about 135 days, and the giant panda cub is born blind, deaf, and nearly hairless.

Cubs weigh about 4 ounces at birth and will stay with their mother for up to 18 months before striking out on their own. These giant panda cubs are born helpless and rely on their mothers for everything.

Mothers will carry their cubs up into trees to keep them safe from predators such as leopards, jackals, and untamed dogs. Cubs will nurse for up to 18 months but begin eating bamboo at around six months of age.

Giant pandas reach a full adult size between the ages of 4 and 5. Males are generally larger than females and can weigh up to 250 pounds. Females typically range from 180 to 220 pounds. The average life span of an enormous panda in the wild is 14 years, while those in captivity can live up to 20 years.

How Many Pandas Are In The World

The giant panda is an endangered species, with a population of about 1,600 pandas living in the wild and 300 in captivity. Conservation efforts are underway to protect these animals and increase their numbers.

In 2016, the International Union for Conservation of Nature (IUCN) updated the status of the giant panda from “endangered” to “vulnerable.” This change was made due to the increasing number of pandas in the wild.

While the overall population of giant pandas is still small, it is good to see that their numbers are slowly but surely on the rise. We may one day see these magnificent animals removed from the endangered species list with continued preservation efforts.

Predators And Threats of Panda Population

The main predators of wild pandas are humans and tigers. Tigers will kill pandas for food, while humans pose the greatest threat to pandas through habitat destruction and illegal hunting.

Habitat loss is the biggest threat to the giant panda. As human populations continue to grow, we are encroaching on the bamboo forests these animals need to survive.

Pandas are also hunted illegally for their fur, prized in some cultures for their supposed medicinal properties.

More opportunities than ever exist for study and conservation initiatives in the wild, with the possibility of reintroducing giant pandas into the wild in China. Implementing these strategies and initiatives would be costly, even with China’s official National Plan for the Conservation of the wild giant panda population.

Preservation efforts are underway to protect big pandas and their habitat. In China, where most of these animals live, hunting them or destroying their habitat is illegal. As a result, panda reserves have been created in an effort to keep these animals safe from harm.

With the help of these preservation efforts, the giant panda population is slowly but surely on the rise. Hopefully, one day these magnificent animals will no longer be at risk of extinction.

The world wildlife fund has collaborated with the government on projects to protect giant pandas and their habitat, including aiding in the creation of a network of reserves for giant pandas and wildlife corridors to link disparate panda populations.

We sincerely hope that this blog has enlightened you about pandas. For more interesting facts, come back often.