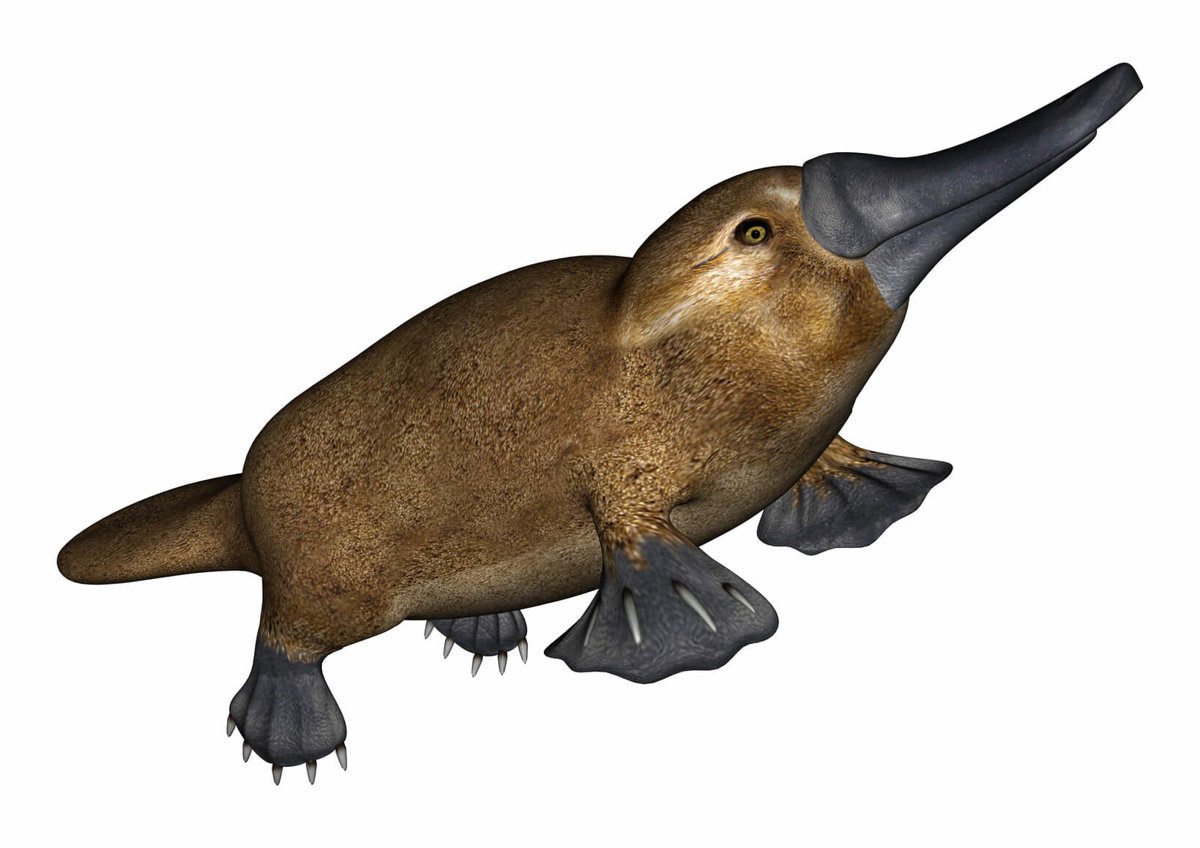 The platypus (also known as the duck-billed platypus) is likely one of the world’s most unusual creatures, and goes by the scientific name Ornithorhynchus anatinus. In fact, some European naturalists first thought that platypuses were fake because they looked so strange.

With a habitat range that stretches from the Australian Alps and Tasmanian Highlands to the rainforest of Queensland in eastern Australia, the platypus is adapted to living conditions that span a range of temperatures, and they have a living range of up to 4.3 miles.

They’re semi-aquatic, which means that they live a large part of their lives in the water in order to search for food. Their sleek, fur-covered body, webbed otter feet and beaver-type tail allow them to be naturally skilled swimmers. A platypus also has a rubbery snout that looks much like a duck’s, and spurs on its ankles. In males, the spurs contain powerful venom which is used to attack potential rivals during mating season. In general, platypuses can weigh from 1.5 lb to 5.3 lb, though males are usually larger than the females.

There are some other unusual features that the platypus possesses. Although most mammal’s body temperatures tends to remain around 37 °C (99 °F), the temperature of a platypus runs (on average) at about 32 °C (90 °F). Their vision is fairly limited, they’re nocturnal, and they completely close their eyes and ears while underwater. Instead of hearing or seeing their prey, they find it by detecting the electrical signals that are given off by their prey’s muscles - a process called electrolocation. When the platypus digs in the muddy banks of rivers or streams to find food, it turns its head from side to side so that these small signals are picked up by receptors on the underside of their snout, helping them to pinpoint exactly where their next meal is hiding.

A platypus will use a rowing motion with its front feet to move through the water, using their back feet and tail to steer and change direction. They usually stay underwater for 30 to 40 seconds at a time, only coming to the surface for 10 to 20 seconds to breathe. Since they have a waterproof coat and a thick layer of body fat for insulation, platypuses are superb swimmers that can stay in the water for many hours at a time. On land, however, they walk on their knuckles to protect their toe webbing, and tend to have a side-to-side gait that looks like a reptile’s.

As carnivores, platypuses feed mostly on freshwater shrimp, insect larvae, annelid worms and crayfish that they first dig out of the riverbed (or catch), then carry in their cheek pouches to the surface to eat. Because a platypus needs to eat about 20% of its own body weight every day to survive, they tend to spend around 12 hours a day looking for food. When out of the water, however, a platypus will hide out in a short burrow just above water level to sleep - as much as 14 hours each day.

The reproductive cycle of the platypus is one of the most unique among all mammals. Instead of giving birth to live young, the platypus female lays eggs, which then have a growth cycle that’s very much like a reptile’s. The platypus mating season happens between June and October, depending on the habitat and environmental conditions, and females become able to mate in their second year. Males usually live alone, and don’t play any part in raising their young. The female, on the other hand, prepares extensively for the arrival of her offspring. After mating, she builds a long, deep burrow lined with leaves and reeds (sometimes as much as up to 66 feet long) to lay her eggs in. The small, leathery eggs usually number no more than three, and are incubated inside the female platypus for around 28 days. They then are laid by her into the bedding material in the burrow. She curls around the eggs to protect them and keep them warm until they hatch around 10 days later.

New-hatched platypuses are tiny (about the size of a lima bean,) blind and hairless. They feed on their mother’s milk which is released through pores in her skin and lapped up by her offspring – platypuses don’t actually have teats like other mammals. Young platypuses nurse for around three to four months, then come out of the burrow around four months of age to start foraging for food with their mother. Interestingly, they’re born with teeth, but these fall out very early, leaving only hard, horny mouth plates behind that they use (along with bits of gravel from riverbeds) to grind up their food.

The lifespan of a platypus can differ, depending on their living conditions and predators, but they’ve been recorded to survive up to 17 years. Their natural predators tend to be snakes, water rats, hawks, owls and eagles. In northern Australia, predation by crocodiles may be a cause for lower numbers.

Although the habitat range of the platypus seems to be very much the same as it was before the European settlement of Australia, dam construction, pollution, netting and trapping by humans have caused their numbers to decrease. Because of successful conservation practices, however, they don’t seem to be in immediate danger of becoming endangered or extinct. Recently in Tasmanian platypuses, however, a fungal disease called mucormycosis has become more widespread and causes ulcers on their back, tails and legs, infection, and possibly death in severe cases.

Although there are some platypuses kept in captivity for conservation reasons, they’re limited to Australia only as of 2013. Those travelling further distances have not survived for longer than 18 months, and are also very difficult to be successfully bred when not in their wild environment.