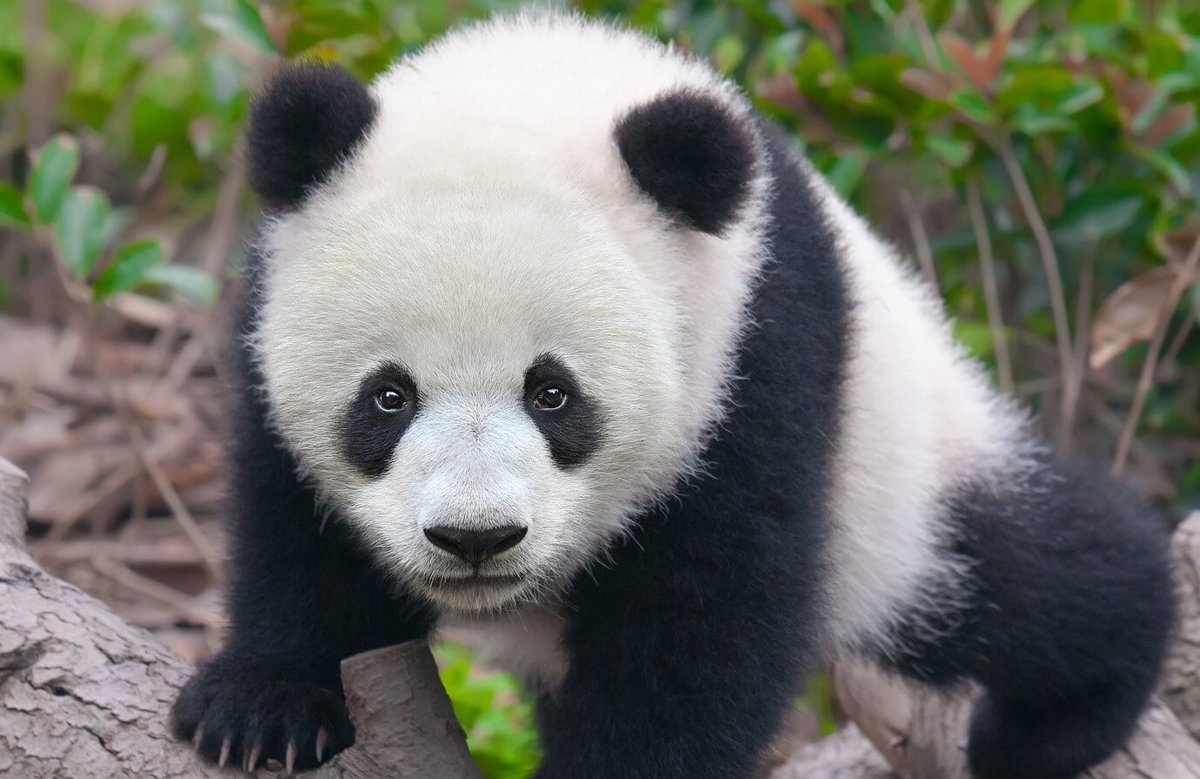 Pandas are famous for their black and white markings. The legs, shoulders, ears and oval patches around the eyes are black, and the rest of the coat is white. Good tree climbers, pandas can also swim to escape predators. Pandas use an enlarged wrist bone that looks like a thumb to grasp objects like bamboo. They weigh an average of 200 to 300 pounds and reach six feet in length.

The shrinking range of the panda is limited to parts of Szechuan, Shensi and Kansu provinces in central and western China. Only around 1,000 pandas exist in the wild, and about 60 in zoos. The panda’s lifespan in the wild is unknown but in captivity averages more than 20 years.

The panda lives in thick bamboo and coniferous forests (evergreens with seed cones) at 8,500 to 11,500 feet elevation. The panda’s digestive system does not absorb the fiber, so it must eat a lot. Despite being taxonomically a carnivore, the panda has a diet that is overwhelmingly herbivorous. The giant panda eats shoots and leaves, living almost entirely on bamboo. Pandas are also known to eat eggs, the occasional fish, and some insects along with their bamboo diet. These are necessary sources of protein.

These solitary animals spend most of their days feeding. Although they live in cold forests, pandas do not hibernate. They move to lower elevations during winter to keep warm and to higher elevations in summer to stay cool. They do not have permanent homes but sleep at the bottom of trees and under stumps and rock ledges.

After a gestation period of 125 to 150 days, a mother panda gives birth to one or two young, but only one survives. Eyes open at six to eight weeks, and the cub starts to move around at three months. Weaned at six months, the cub becomes independent after a year.

For many decades the precise taxonomic classification of the panda was under debate as both the giant panda and the distantly related red panda share characteristics of both bears and raccoons. However, genetic testing seems to have revealed that giant pandas are true bears and part of the Ursidae family. Its closest bear relative is the Spectacled Bear of South America.

The giant panda has long been a favorite of the public, at least partly on account of the fact that the species has an appealing baby like cuteness that makes it seem to resemble a living teddy bear. The fact that it is usually depicted reclining peacefully eating bamboo, as opposed to hunting, also adds to its image of innocence. Though the giant panda is often assumed docile because of their cuteness, they have been known to attack humans, usually assumed to be out of irritation rather than predatory behavior.

The future of pandas is threatened due to habitat loss from increasing human populations; poaching; and periodic bamboo die-offs. Giant pandas are an endangered species. Their main threat is habitat destruction. As the population of China continues to grow, panda habitat, and the bamboo they feed on, is lost to development. Mining and agriculture also threaten panda habitat, as well as tourists.

Since pandas reproduce so infrequently, it is difficult for their population to recover. Wildlife reserves in parts of China seek to maintain habit for pandas, though China has been criticized for showing little interest in true conservation. The Chinese government rents pandas to zoos around the world.

Few pandas have been born in zoos, and only a handful of those have been released into the wild; the majority of which did not survive. The enormous amount of money spent on panda breeding programs has been criticized, as the money could be used much more effectively by saving wild habitats.

Zoo pandas suffer the same stresses all wild animals face in captivity. They are moved from zoo to zoo, usually more for political and economic reasons rather than genetic management. Their natural habitat can never be truly simulated, leading to changes in behavior, prolonged inactivity, health problems, stereotypical behavior and lower levels of immunity creating higher susceptibility to illness and disease. Putting pandas' welfare above propaganda and profits, pandas should be put in refuges out of the public eye to eliminate the stress they endure due to such exposure.