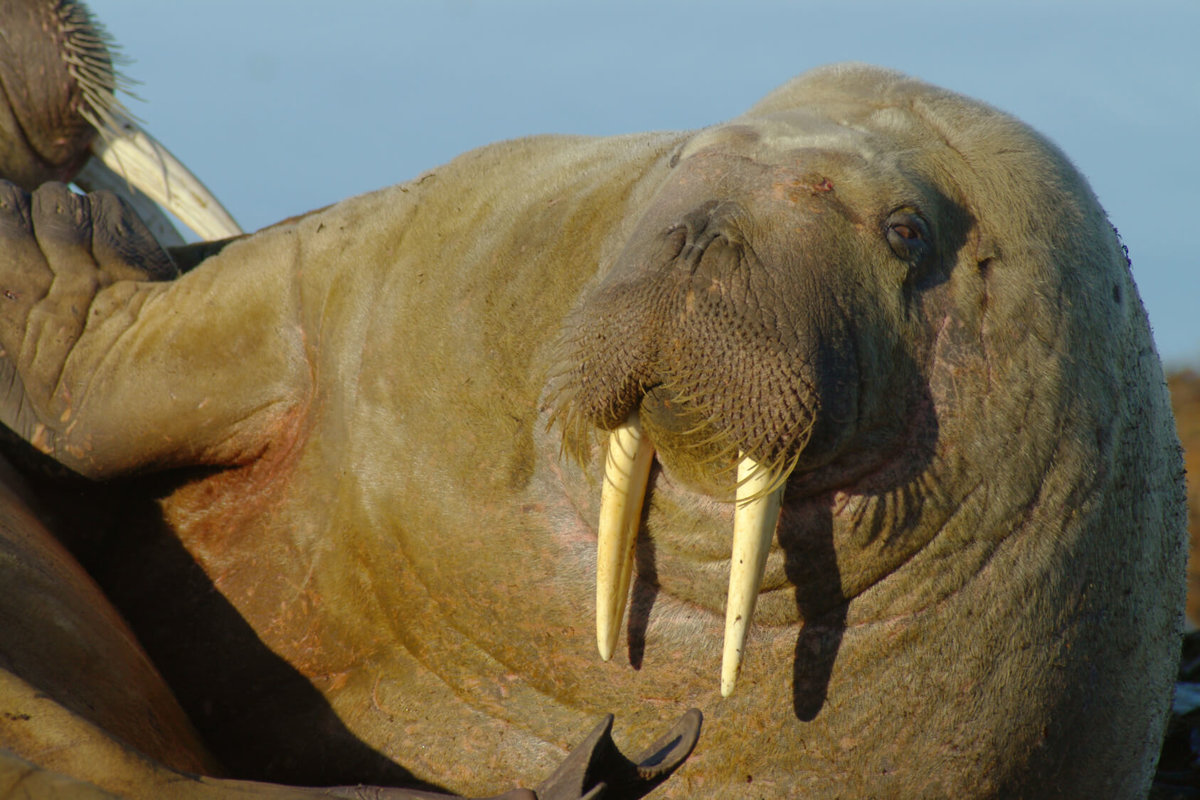 Walrus, a marine mammal, Odobenus rosmarus, is found in Arctic seas. It is the largest of the fin-footed mammals, or pinnipeds. The walrus is also distinguished by its long tusks and by cheek pads bearing quill-like bristles. Adult males are 10 feet long or more, and weigh up to 3,000 lb; females weigh about two thirds as much as males. The tusks, which are elongated upper canine teeth, may reach a length of 3 feet in large males and weigh over 10 lb. The hide is very thick and wrinkled, and is light brown and nearly hairless. Beneath the hide is a layer of fat several inches thick.

Like sea lions, walruses can turn their hind flippers forward for walking on land; their foreflippers are weaker than those of sea lions and they are not as strong swimmers. They live in shallow water and spend much of the time on ice floes and beaches, where they congregate in herds of about 100 animals of both sexes. They can dive to a depth of 240 feet to find food, relying primarily on touch; their diet consists chiefly of shellfish, especially mollusks.

The cheek teeth of walruses are rounded and are used for crushing shells. Walruses use their tusks for prying shellfish from the ocean floor, as well as for pulling themselves up onto ice floes. The herds tend to follow the ice line, moving south in winter and north in summer.

Walruses mate in the water and give birth on land or ice floes. Male walruses compete for territory, often fighting each other; the winners in these fights breed with large numbers of females. Older male walruses frequently bear large scars from these bloody but rarely fatal battles. Walruses have been known to kill polar bears.

Walruses have a breeding season in mid winter, a time spent in the southern Bering sea. The males show off in the water for the females who view them from pack ice. Males compete with each other aggressively for this display space. Mating usually takes place in the water. After fertilization the fertilized egg remains dormant for several months, and then a gestation period of 11 months follows. When a calf is born it is over 3 feet long and able to swim. Birth takes place on the pack ice; the calf nurses for about 2 years, spending 3 to 5 years with its mother. Females mature at about 6 years, males at 9 or 10. A walrus lives about 50 years.

Walruses spend about half their time in the water and half their time on beaches or ice floes where they gather in large herds. They may spend several days at a stretch either on land or in the sea. In the sea they sometimes catch fish but generally graze along the sea bottom for clams which they suck from their shells. Abrasion patterns of the tusks show that they are dragged through the sediment, but are not used to dig up prey. They can also spit jets of water to look for clams. Walruses have been observed to attack narwhal and seals if they cannot find any other food source. This has mainly been observed in large males and the ingestion of seal flesh causes their blubber to appear "greasy".

There are two walrus races, the Atlantic and the Pacific. The Atlantic race, formerly found as far South as Nova Scotia and occasionally Massachusetts, is now considered endangered. The walrus's nearest living relatives are the fur seals, with which it evolved from bearlike ancestors, the Enaliarctidae, in the North Pacific Ocean about 20 million years ago. Walruses are classified in the phylum Chordata, subphylum Vertebrata, class Mammalia, order Carnivora, suborder Pinnipedia, family Odobenidae.

The Eskimo hunt walruses for food and clothing; the introduction of firearms greatly increased the size of the kill. Commercial hunting of walruses for blubber, hides, and ivory has been extensive since the 16th century and has greatly reduced the walrus population. Several nations now have protective laws; Canada and Russia prohibit walrus hunting except by peoples for whom it is a traditional part of the economy.

Walruses are common victims of the animal entertainment industry. Aquariums and marine mammal theme parks are part of a billion-dollar industry built on the suffering of intelligent, social beings who are denied everything that is natural and important to them. Animals are taken from the wild; their families torn apart.

Marine parks have shown no more interest in conserving marine mammals' natural habitats than they have in educating audiences. Cetaceans do not belong in captivity where they are forced to perform meaningless tricks. They are often separated from family members when they’re shuffled between parks. Most die far short of their natural life spans.

The living conditions at these attractions are often dismal, with animals confined to tiny, filthy, barren enclosures, but even the best artificial environments can’t come close to matching the space, diversity, and freedom that cetaceans have in their natural habitats.