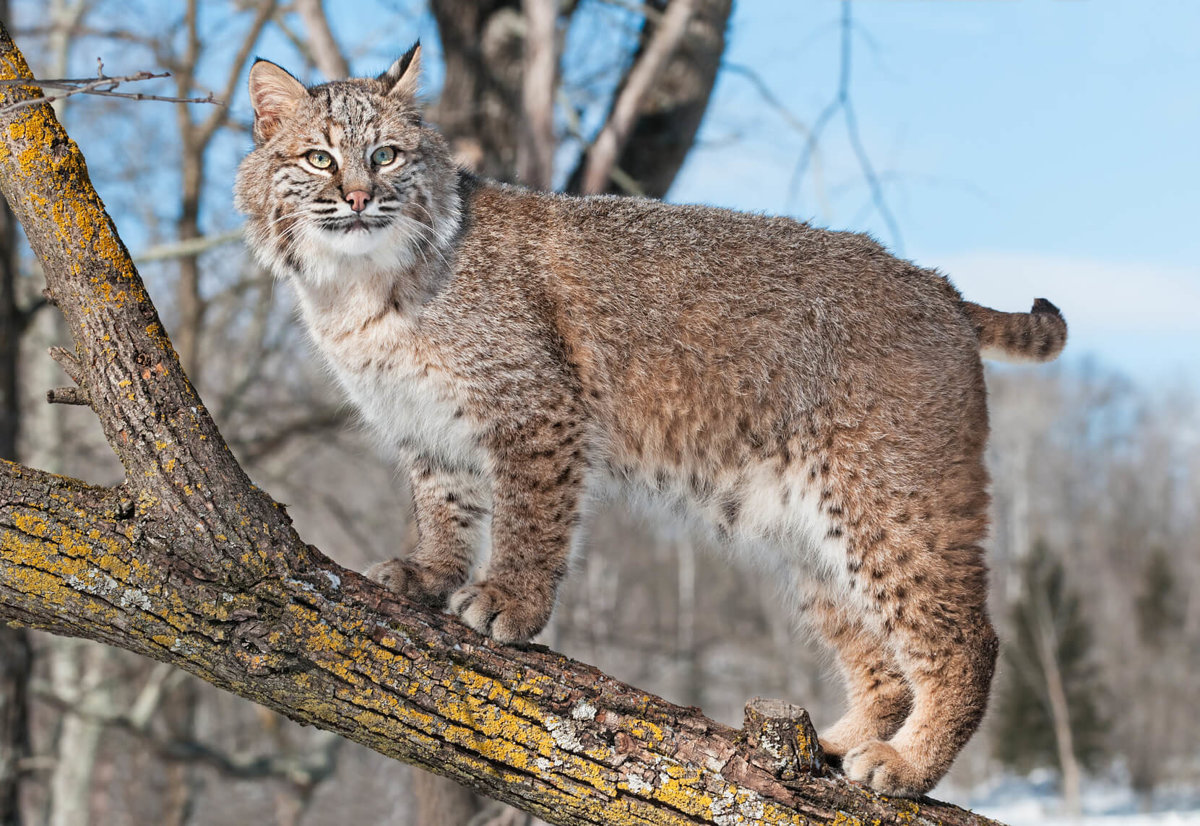 Elusive-seeming felines that often appear as characters in various American indigenous legends, bobcats are nevertheless well known members of the Felidae family, found exclusively in North America. The bobcat’s thirteen member subspecies have a wide range over the continent, found from the southern parts of Canada to Central Mexico. These smaller wild cats can adapt to life in many different types of habitats, from forested areas to wet swampland, and from arid semi-desert to the more populated edges of urban centers. Despite their wild nature, these are some pretty adaptable felines.

While many people confuse bobcats with their close Lynx cousins, there are some fairly obvious differences that separate the two. Bobcats are generally smaller than lynx, ranging anywhere from 47.5 to 125 cm (18.7 to 49.2 in) long and about 30 to 60 cm (12 to 24 in) at the shoulders, but they can range in size depending on where they live. Eastern Canadian bobcats are generally the largest bobcat subspecies. Bobcats have a smaller neck ruff than the larger Canadian lynx as well as a smaller paw circumference and less thickly furred feet, which makes it more difficult for them to thrive in areas that receive a large amount of snowfall.

Male bobcats also tend to outweigh females, with an average weight of around 21lb compared to 15 lb. A bobcat’s soft, dense coat is also ideal for stealthy camouflage and insulation from colder weather. Typically a tan to grey-brown in color, they also have darker spots over their body and black or brown bars on their front legs, with white markings on their chin and underbelly. Their distinctive, stubby tail is characteristic to these cats, and is what actually gives the bobcat its name. On average, bobcats tend to live up to age seven in the wild, although the oldest captive on record lived an astounding thirty two years.

These sleek and muscular predators have a physiology that’s perfect for stalking and hunting, with longer, more powerful hind legs that allow the bobcat to bound efficiently after their prey and eyes with large round pupils that can expand to let in the maximum amount of light possible. Besides having excellent senses of smell and hearing, they also have sharp vision that can easily track the rapid movements made by other animals. They’re excellent climbers and surprisingly talented swimmers, though like many cats they prefer to avoid the water if at all possible. Their diet preferences tend to swing towards rabbits or hares, but they’re not tremendously picky either, eating anything that’s available –  from insects to geese, swans and cranes, to smaller rodents, dogs, cats, foxes, young deer and even small sharks. They can also survive for long periods of time without food, gorging when they do hunt successfully, and burying larger kills so that they can return and feed on them again and again.

Like many other cat species, bobcats are crepuscular, meaning that they’re most active in the early evening and early morning. They tend to remain in well-defined home territories, travelling anywhere from 2 to 7 miles along their regular routes each night to find prey and mark their territory anew with feces, urine and claw marks. Bobcats are also masters of the contingency plan as well; although they tend to have a main den, they’ll also have several other shelters on the outer limits of their range, usually in logs, brush piles, or under rock ledges. The bobcat’s range can also vary depending on season, age, sex and species. Many males have significantly larger territories, while some female bobcats expand their home ranges in colder weather to find mates. Bobcats typically tend to prefer solitary living, but their ranges will often overlap, with two or more female territories often found within one male’s domain.

Breeding season for bobcats generally happens in the early spring, with females entering sexual maturity by their second year. A male will usually travel with a female and mate with her several times over a period of weeks or months, but bobcats are not truly monogamous. Both males and females often go on to mate with other partners, even within the same season. Kittens, helpless and blind at birth, are mostly born in late spring after a gestation of around 60 to 70 days, with litter sizes that range from two to four in size. The mother raises her kittens alone in a den (often a small cave or hollow log), weaning them around two months of age and keeping them with her for the first four to six months, though some species of bobcat kittens will stay with the female up to one year later.

In spite of their place near the top of the food chain, bobcats can still be at risk from other, larger predators. Cougars, wolves and coyotes will kill bobcats of any age, while owls, eagles and foxes find bobcat kittens to be easier prey. Young bobcats have a higher rate of injury or death in the period just after they leave their mother, since many of them succumb to disease, accidents, and even starvation as they’re still perfecting their own hunting skills.

Threats to bobcats include hunting, trapping and being kept in captivity for human entertainment. In Mexico, bobcats are persecuted as a sheep predator and are frequently killed by farmers. Bobcats are hunted and inhumanely trapped for their fur throughout much of their range.

Even under the best of circumstances, captivity is cruel for bobcats. Confined to tiny cages and gawked at by crowds, animals in exhibits and acts endure constant stress. They may suffer from temperature extremes and irregular feeding and watering. Without exercise, they become listless, their immune systems are weakened, and they become prone to sickness; many resort to self-mutilation in reaction to stress or boredom. Mental illness is rampant among confined animals. Torn from their families and deprived of all dignity, every part of their lives is controlled by their captors.

While zoos and aquariums may appear to be educational and conservation-oriented, most are designed with the needs and desires of the visitors in mind, not the needs of the animals. Many animals in zoos and aquariums exhibit abnormal behavior as a result of being deprived of their natural environments and social structures. When the facility breeds too many animals they become "surplus" and often are sold to laboratories, traveling shows, shooting ranches, or to private individuals who may be unqualified to care for them.