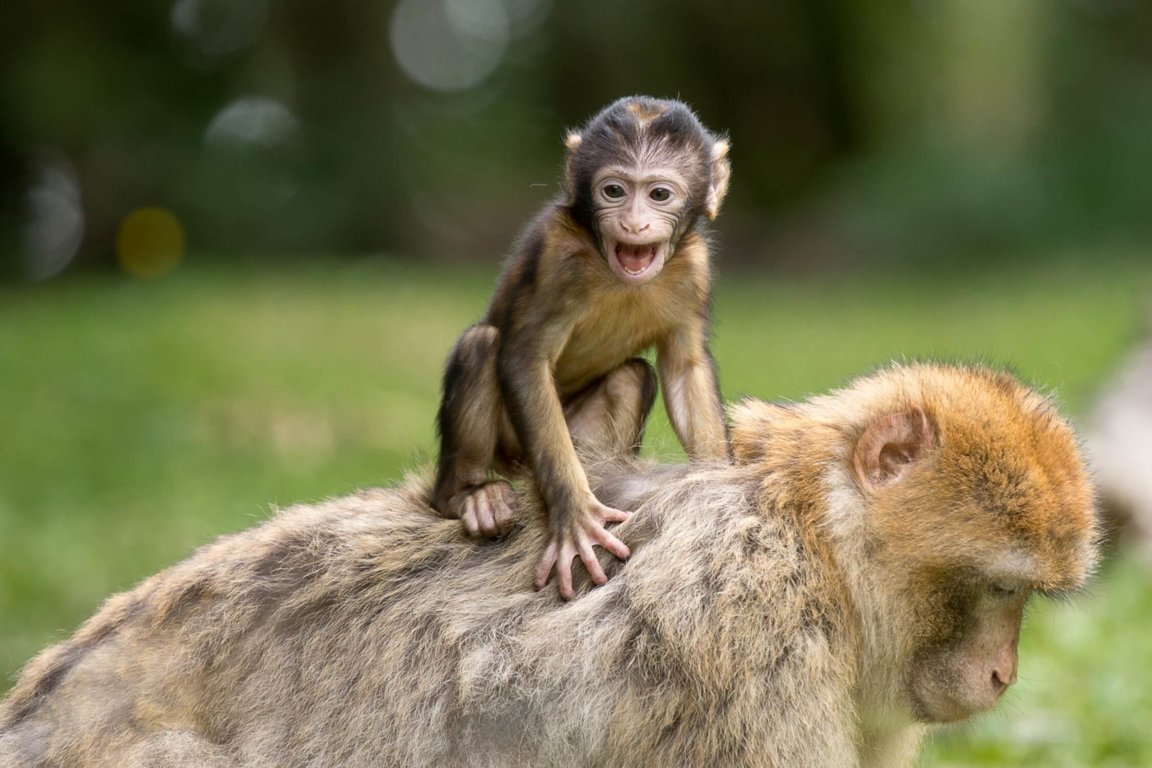 Monkeys are a large and varied group of mammals of the primate order. They live in trees, grasslands, forests, mountains and plains. They are seriously threatened by habitat loss.

The term monkey includes all primates that do not belong to the categories human, ape, or prosimian; however, monkeys do have certain common features. All are excellent climbers, and most are primarily arboreal. Nearly all live in tropical or sub-tropical climates. Unlike most of the prosimians, or lower primates, they are almost all day-active animals. Their faces are usually flat and rather human in appearance, their eyes point forward, and they have stereoscopic color vision. Their hands and feet are highly developed for grasping; the big toes and, where present, the thumbs are opposable. Nearly all have flat nails. Monkeys habitually sit in an erect posture.

Monkeys are most easily distinguished from apes by their tails. Apes have no tails. Apes swing arm-to-arm in trees, but most monkeys don’t. Instead, they run across branches. Their skeletal structure is similar to that of other four-footed animals.

Monkeys live in troops of up to several hundred individuals and travel about in search of food, having no permanent shelter. As in apes and humans, the female has a monthly reproductive cycle, and mating may occur at any time, but in some species mating is seasonal. Usually only one infant is born at a time; it is cared for by the mother for a long period.

Monkeys have their own complex language, using different sounds to identify different types of predators. They have been witnessed banging stones together to warn each other of nearby predators. They also use facial expressions and body movements to communicate with each other. Grinning, yawning, head bobbing, jerking the head and shoulders forward or pulling the lip is usually a sign of aggression. Affection is expressed by grooming.

Some monkeys are monogamous, mating for life. They become distressed when separated. They express affection by holding hands, nuzzling, cuddling, grooming each other, intertwining their tails and lip smacking.

The pygmy marmoset is the smallest monkey in the world measuring less than six inches and weighing only three to five ounces. The male mandrill is the world's largest monkey at just over 3 feet long and weighing over 70 pounds.

Most monkeys eat both plants and animals. Some also eat dirt. Monkeys peel their bananas like humans and do not eat the skins.

Monkeys can grasp with both their fingers and toes. Many monkeys are skilled tool users. They use branches to capture food, use leaves as gloves, smash nuts with rocks, remove spines and hairs from caterpillars by rubbing them against branches and use large branches to club snakes.

The Old World monkeys are found in South Asia, with a few species as far North as Japan and North China, and in all of Africa except the deserts. Most are arboreal, but a few, such as baboons and some macaque species, are ground dwellers. Some Old World monkeys lack tails; when a tail is present it may be long or short but is never prehensile (grasping). The nostrils are close together and tend to point downward. Many species have cheek pouches for holding food, and many have thick pads (called ischial callosities), on the buttocks. Their gestation period is five to nine months. Adult Old World monkeys have 32 teeth. The Old World monkeys, sometimes called true monkeys, are more closely related to the apes and humans than they are to the New World monkeys; the two monkey groups probably evolved separately from ancestral primates.

The Old World monkeys include the many species of macaque, widely distributed throughout Africa and Asia. The rhesus monkey is an Asian macaque. Related to the macaques are the baboons of Africa and South West Asia, as well as the mandrill and mangabey of Africa. The guerezas, or colobus monkeys (genus Colobus), are very large, long-tailed, leaf-eating African monkeys. Their Asian relatives, the langurs and leaf monkeys, include the sacred monkeys of India. The snub-nosed monkey of China and the proboscis monkey of Borneo are langurlike monkeys with peculiar snouts. The guenons (Cercopithecus) are a large group of long-legged, long-tailed, omnivorous monkeys found throughout sub-Saharan Africa. One very widespread guenon species is the green monkey, or vervet, with olive-brown fur.

The New World monkeys are found from South Mexico to central South America, except in the high mountains, and are classified into two families (Callatrichids and Cebids). The Callatrichids are very small, while the Cebids are similar in size to the Old World monkeys. They are all thoroughly arboreal and most have long, prehensile tails with which they can manipulate objects and hang from branches. In most the thumb is lacking. They have widely separated nostrils that tend to point outward; they lack cheek pouches and ischial callosities (a thickened piece of skin found on the buttocks). Their gestation period is four to five months. Adults of most New World species have 36 teeth. The New World monkeys include the marmosets and tamarins, small monkeys with claws that are classified in a family of their own, the Callithricidae. The rest of the New World monkeys are classified in the family Cebidae. They include the capuchin (genus Cebus), commonly seen in captivity, which has a partially prehensile tail. Prehensile tails are found in the spider monkey and woolly monkey as well as in the howler monkey, the largest member of the family, which has a voice that carries several miles. Smaller forms with nonprehensile tails are the squirrel monkey and titi, the nocturnal douroucouli, or owl monkey, the saki, and the ouakari.

These wild animals are bred in captivity and taken from their mothers within hours or days of birth, or stolen from their mother in the wild who is often killed in the process. Sold like toys by unethical businesses and backyard breeders, profit is put above the welfare of the animals. Unprepared guardians purchase the animals, often with little knowledge on primate care. Adorable baby monkeys quickly grow into aggressive and territorial adults. Guardians often resort to drastic measures to control the animals, such as inhumane tooth removal. Eventually they are abandoned, given to roadside zoos or sold to another unprepared family where the cycle begins again. They end up living their lives in tiny cages, isolated, lonely, deprived of their wild nature and social interaction with their own kind.

MONKEYS IN THE ENTERTAINMENT INDUSTRY