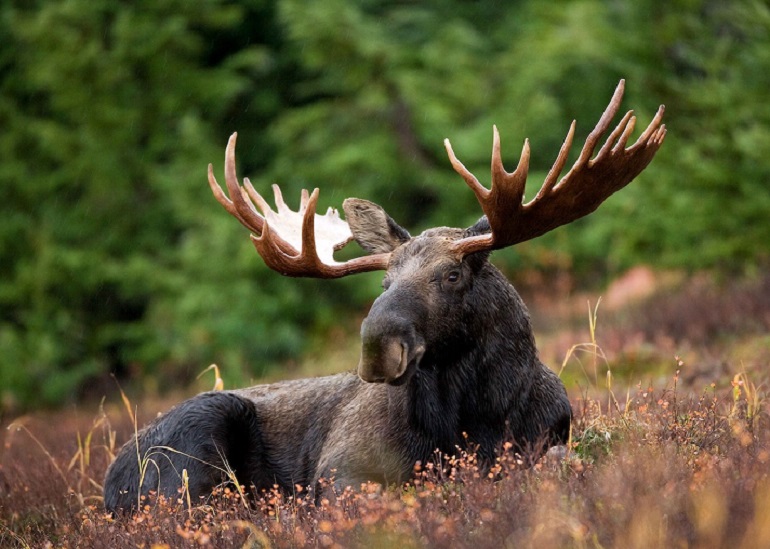 The Moose (North America), or Eurasian Elk (Europe), is the largest extant species in the deer family. Moose is a large deer with palmate antlers; other members of the deer species have antlers with a dendritic (“twig-like”) configuration.

Hunting and other human activities have caused a reduction in the size of the Moose’s range over time. As a result, Moose have been reintroduced to some of their former habitats.

Niacin and riboflavin, two important B vitamins, are abundant in roasted moose meat. These vitamins are crucial for healthy skin, hair, nerves, and muscles, as well as growth and development. They also assist our bodies in using the energy that comes from food. Additionally, roasted Moose is a fantastic source of iron.

The Moose is the national animal of Estonia, Latvia, Lithuania, Norway, and Sweden. Moose was a common name for the Eurasian Elk in England before 1784 when today’s used English name elk replaced it.

Moose have long faces and muzzles that dangle over their chins. They have small eyes relative to their head size, rounded ears, a large dewlap (a flap of skin that hangs from the neck), and a large hump on their shoulders.

Moose hooves expand in summer to help them wade through the soft, wet ground and shrink in winter for walking on deep snow. Moose are good swimmers and can even swim underwater!

Moose are mostly active at dawn and dusk. During the day, they rest in forested areas where predators and humans are less likely to be seen. However, Moose are curious and will approach people, vehicles, and other beasts that catch their attention.

Moose are mostly solitary except during the mating season (September-October) and when mothers care for their young.

Each September and October, males, known as bulls, bellow loudly to entice females. Normally lonesome bull moose may gather at this time to compete with each other for dominance in mating by using their antlers.

The two sexes separate after mating and don’t reunite until the following year. They tend to ignore one another even though they might occasionally forage in the same area.

In the spring, female moose gives birth to one or two calves, weighing around 30 pounds. By the time they are just five days old, these calves can outrun a person due to their rapid growth. Up until the subsequent breeding season, young moose remain with their mothers.

The scientific name for Moose is Alces alces. The word “alces” is derived from the Latin word for elk which is “alce.”

The largest type of deer is the Moose. Males are easily identified by their enormous antlers, which can measure 6 feet in length. Moose have lengthy features and drooping chins on their bayonets. Each Moose has a bell, a skin flap that sways beneath the throat.

Moose are found in Canada, Alaska, Scandinavia, Latvia, Estonia, Russia, and Poland. Moose are mostly solitary except during the mating season (September-October) and when mothers care for their young.

There are four classifications of subspecies of Moose on the continent of North America, including Eastern, Western, Alaskan, and Shiras. The Alaskan moose subspecies, found in Alaska and western Yukon, are the largest; the Shiras moose subspecies are the smallest.

The location and size are the key variations between the subspecies. For example, while the western Moose may be found in western Canada and the western regions of the US, the eastern Moose can be found throughout eastern Canada, New England, and New York.

Several Eurasian subspecies, notably the European Moose, are also acknowledged by some classifications, though they are not generally accepted.

Moose are herbivores, and their diet consists mostly of aquatic plants. Moose feed on leaves, twigs, buds, and aquatic plants. In the winter, they eat woody browse, such as willow and birch. Moose are good swimmers and can even swim underwater!

During winter, Moose might also fervently devour conifers like fir and yew. A network of pathways known as a “moose yard” may be used by Moose to go through extremely deep snow. They might also eat a lot of water vegetation during the summer.

The Moose’s broad, flexible, and sensitive muzzle seems to be a unique eating apparatus that enables them to use the abundant aquatic vegetation in shallow lakes and streams. When feeding, moose can dive and spend up to 50 seconds underwater. Even calves can swim very well.

Moose populations have declined in some areas due to habitat loss, but overall their population is stable. Moose can live up to 25 years in the wild. Antlers in adults are wider and more open in shape and can grow to reach more than 6 feet long.

Age and diet influence their antlers’ size and growth rate, and symmetrical antlers indicate a healthy moose. Instead of counting the number of times, the diameter of the antler beam is employed to estimate the age of those.

After a moose reaches the age of 13, its antler becomes more elaborate and heavier. Antlers are shed each winter, and a new set grows each spring. It takes antlers between three and five months to grow fully. They are among the animal organs in the world that grow the fastest as a result.

Moose have few predators but can be taken by wolves, bears, cougars, and humans. Moose’s calves are especially vulnerable to predation by black bears, coyotes, and Wolves. Moose are also at risk from traffic collisions and disease.

Habitat loss is a threat to Moose populations in some areas. But one of the most unexpected facts is that killer whales also prey on Moose. This is because Moose frequently swim between the islands off America’s northwestern coast. Even a few instances of Greenland sharks killing Moose have been documented.

When obstructed by in-depth snow, they retreat into stands of conifers to shield their lower haunches and vulnerable inguinal region from wolf attacks. The wolves may then be charged and attacked by being slapped with the front legs and kicked with the back legs. These blows are lethal enough to end the lives of wolves.

For mobility, they prefer hard, level terrain with little snow, including peaks that have been blown free of snow or frozen lakes with a thin blanket of ice.

Moose mate in the fall (September-October). After a gestation period of 240- 262 days, 1-2 calves are born in late May to early June. The calves weigh 30- 35 pounds at birth and can stand and walk within an hour. They spend their first summer with their mothers and are weaned by the following winter.

Young bulls (male Moose) leave their mothers after one year, but young cows stay with their mothers for up to two years. Moose can live up to 25 years in the wild.

Moose’s calves are born with a reddish tint rather than the brown of adults. Moose are typically only observed together during breeding or when males engage in conflict over females, except for mothers and calves.

Moose have a lengthy gestation period of roughly 230 days due to their size. It is common to have twins. In stark contrast to the dark color of adult moose, newborns are tan in color.

Despite their rapid growth, they still need their mother’s protection from wolves during the winter. Just before she gives birth again, their mother drives them away. The scattered yearlings wander in search of new abodes.

Huge, flat, and broad antlers that can measure 4 to 5 feet across are characteristic of the male or bull moose. Early summer marks the beginning of antler growth. Velvet, a silky, fuzzy skin, covers antlers as they initially begin to develop—blood vessels in the velvet transport nutrients to support the growth of the antlers. When the antlers reach their peak size in the late summer, the blood supply stops, and the velvet begins to deteriorate.

An Alaskan moose that weighed 1,808 pounds was the biggest Moose ever recorded in history. According to the Guinness Book of World Records, the monster, who was murdered in Yukon in September 1897, had shoulders that were 7.6 feet tall, easily breaking all previous records. It was so large that, despite a century afterward, no moose had been found to have surpassed its astounding size.

We expect this write-up has aided you in learning more about Moose. Stay in touch for more facts.