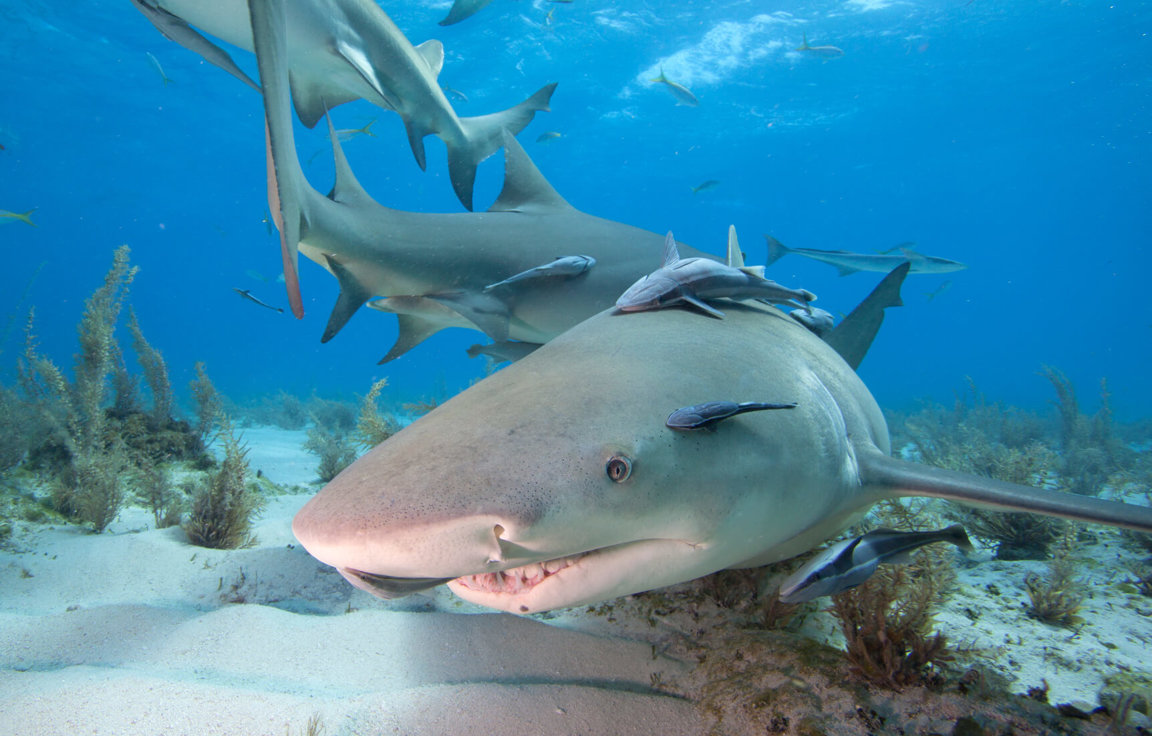 Sharks are a group of fish characterized by a cartilaginous skeleton, five to seven-gill slits on the sides of the head, and pectoral fins that are not fused to the head. Shark skin is covered with tooth-like dermal denticles that protect them from damage and parasites. They have large, powerful muscles that enable them to swim fast and perform amazing acrobatic feats.

Most sharks are born with functional eyesight, but many species eventually lose sight due to cataracts. Some sharks, such as the hammerhead shark, have unusual eye placement that may give them 360-degree vision.

Sharks are an important part of the marine ecosystem. Large sharks help to keep populations of other animals in check by preying on the sick and weak. They also play an important role in the food web’s movement of nutrients and energy.

One of the most distinctive features of sharks is their dorsal fins. These fins are used for stabilization while swimming and help the shark to make tight turns. Most sharks have a sleek, streamlined body that helps them swim quickly and efficiently through the water. Sharks come in various colors: brown, gray, white, and even pink! Some sharks even have patterns on their skin that help them to blend in with their surroundings.

Despite their fearsome reputation, sharks are quite beautiful creatures!

Did you know that…

In addition, sharks need a lot of space to swim and hunt, so they usually avoid areas with a lot of human activity.

Sharks are found in all of the world’s oceans, but they tend to prefer waters around the tropics. There are also a few species of sharks that live in freshwater rivers and lakes. However, these sharks usually only live in these habitats for part of their life cycle and return to the ocean to mate and give birth.

Sharks give birth to live young. The female shark produces eggs inside her body, but the eggs are fertilized by the male shark and hatch inside the female’s uterus. The number of young sharks varies depending on the species, but most sharks produce between 2 and 10 offspring simultaneously.

After the young are born alive, they are on their own and must fend for themselves. Sharks do not care for their young and will often eat them if given the opportunity.

The lifespan of a shark depends on the species, but most sharks live for 20-30 years in the wild. Some species of sharks can live for more than 100 years!

Although shark attacks on humans are rare, they can be very serious. Despite their reputation, sharks are quite shy, and most shark species pose no threat to humans. Humans are estimated to kill 100 million sharks yearly, while sharks only kill about 10 people. However, a few species of sharks are known to attack humans, and these attacks can be very dangerous.

The most dangerous type of shark attack is a “sleeper hold,” where the shark grabs onto the person with its mouth and then spins around in the water, dragging the person under. These attacks are very rare, but they are also very deadly.

While most sharks pose no threat to humans, a few species can be dangerous. The best way to avoid being attacked by a shark is to stay out of the water if you see one. If you are in the water and a shark starts to approach you, try to stay calm and make no sudden movements. Keep your eyes on it while moving back to the shore.

Shark in Fishing and Cooking

In addition to their reputation as predators, sharks are also prized by fishermen for their meat, fins, and oil. Shark meat is considered a delicacy in some cultures and is often used in soup or stew. Shark fins are used to make soup, called shark fin soup, while shark oil is used as a lubricant or in cosmetics.

Sharks are apex predators, meaning they are at the top of the food chain. This means they have no natural predators and hunt marine mammals. Sharks are often feared because of their reputation as man-eaters, but most species pose no threat to humans. When they do, it is usually because they mistake us for seals or other prey.

All other sharks feed on squids, smaller sharks, octopuses, shellfish, and other invertebrates. If the population of sharks declines, this can lead to an increase in the population of their prey, which can have a negative impact on marine ecosystems.

Sharks can be found in oceans all over the world. They tend to prefer warm, shallow waters near the coast but can also be found in deep water far from land. Some species of sharks, such as oceanic whitetip and shortfin mako, migrate long distances every year, following patterns of temperature and food availability.

There are more than 500 species of sharks, divided into 8 major families. Some of the more well-known types of sharks include the Great White shark, the Hammerhead shark, the Tiger shark, and the Blue shark.

Many shark populations are declining due to overfishing and habitat loss. It is estimated that 100 million sharks, including whale sharks and basking sharks, are killed each year by humans to make an expensive soup dish in China. This is a serious problem because it is not sustainable and could lead to the extinction of many shark species.

Despite their important role in the ecosystem, sharks are threatened by several human activities. These include overfishing, finning (the practice of cutting off a shark’s fins of live sharks and discarding the rest of the body at sea), and pollution.

Shark populations have declined by as much as 90% in some areas due to these activities. Some fisheries allow the catching of whole sharks, while others have outright prohibited shark fishing and shark fin trade.

According to the IUCN, 21% of shark and ray species are Endangered Species with extinction. However, this is an improvement from the 28% of species that were considered threatened in 2006.

There are many reasons for this improvement, but one of the most important is the increased awareness of the value of sharks and rays and the need to conserve them. This has led to changes in fishing practices and the establishment of protected areas where these animals can thrive. Organizations such as Shark Advocates International are working hard to ensure that sharks are given the protection they need to survive and thrive in the future.

What Can We Do To Help Sharks?

You can help sharks by supporting sustainable shark fisheries and choosing seafood that has been caught using methods that don’t harm sharks. You can also help by donating to shark conservation organizations or by volunteering your time to help with their work. Together, we can make a difference for these amazing creatures!

Sharks are important animals in the ecosystem and are also prized by fishermen for their meat, fins, and oil. However, the harvesting of sharks has led to population declines in many shark populations around the world. With our help, these amazing creatures will continue to play a vital role in the ocean ecosystem for generations to come.

Thank you for reading! I hope this has helped you learn more about these amazing creatures.