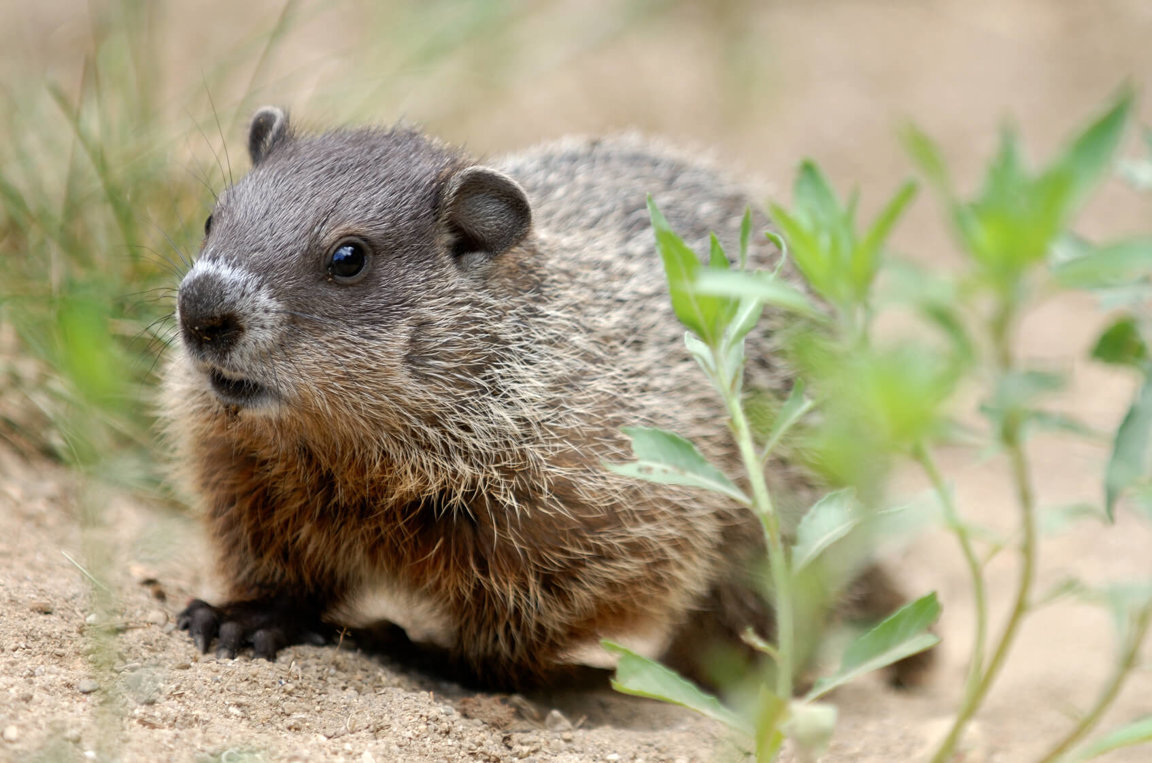 Woodchucks, also called groundhogs, are small rodents of the squirrel family. They are native to North America and can be found in wooded areas from Canada to Mexico. They are well-known for their ability to dig burrows and for their love of eating vegetables.

They are interesting animals and make good pets for people who have the space to provide them with natural habitats. Being cautious animals, woodchucks can be startled by unfamiliar objects in their environment.

The sexes resemble one another in appearance, with males being larger than females. Adults range in length from 17 to 32 inches, with a tail that is usually 4 to 10 inches long. From 5 pounds in the early spring to 14 pounds in the fall, adult weight varies greatly throughout the year.

They are deep hibernators, thus, their weight will vary greatly from the time they emerge from their den and when they enter it. The woodchuck has a black face, legs, and feet, a tail that is either brown or black, and coarse, reddish-brown fur that is grizzled with guard hairs that are grey with yellow tips.

Although rare, melanistic (black) animals do exist. Short, strong legs and short ears are features of woodchucks. Their incisor teeth must be worn down when feeding since they are constantly growing.

The word “woodchuck” is derived from the Algonquian (Native American) word wuchak, which means “digger.” Groundhog is another name for woodchuck that comes from their habit of digging burrows in the ground. They are also sometimes called whistle pig because they make whistling sounds when they are frightened.

The woodchuck is a member of the squirrel brood, and its scientific name is Marmota monax. Woodchucks are the largest members of the squirrel family in North America. Young woodchucks typically weigh between 4 and 10 pounds (1.8 to 4.5 kg).

Woodchucks have short legs and stout bodies, and their fur is usually brown or reddish-brown in color. Woodchucks have large front teeth that they use for digging burrows and eating vegetation. Woodchucks are proficient swimmers and good climbers, but they spend most of their time on the ground.

Excellent burrowers, groundhogs use their tunnels for resting, raising their young, and hibernation. Even though groundhogs are the most solitary marmots, a group of them may live in the same burrow.

The two to five exits that groundhog burrows often have served as their principal means of escaping from predators. Burrows can seriously threaten residential and agricultural development by destroying farm equipment and even threatening the building foundations.

They are found throughout North America, from Canada to Mexico. In Canada, woodchucks are found in every province except for Nunavut. Woodchucks are also found in the northwestern United States, including Alaska. They prefer habitats that are brushy or wooded, but they can also be found in open fields and meadows.

They are mostly active during the day, and they spend most of their time in their burrows. They typically only come out of their burrows to eat or mate. When in danger, groundhogs prefer to escape to their burrows, which they fiercely defend with their two enormous incisors and front claws.

In general, groundhogs are aggressive and territorial within their own species, and they may engage in combat to maintain supremacy. When not actively feeding, animals are attentive when they are outside their burrow. It is usual to witness one or more animals standing upright on their rear feet, scanning the area for threats.

When fighting, critically hurt or captured by a predator, groundhogs may squeal. Low barks and a sound made by teeth grinding are two other noises that groundhogs have been known to generate.

The woodchuck’s highly developed sense of smell enables them to find locations where others have lived months or even years before, even when a burrow’s entrance is hardly discernible.

They may quickly reactivate a tunnel system and start using it once more. Before an abandoned burrow is rediscovered, you can avoid this by burying a three-foot square plate of welded wire, centered over the entry hole.

Woodchucks are vegetarians, and their diet consists mainly of grasses, herbs, and other plants. Woodchucks also eat fruit, nuts, and vegetables. In the wild, woodchucks typically eat whatever vegetation is available in their habitat. Woodchucks will also eat insects, grubs, and small mammals.

A mature groundhog can consume up to one pound of plants every day. Early in June, groundhog metabolism slows and while eating less, gains up to 100% more weight as fat reserves are produced to keep them alive during hibernation and late winter.

To get through the winter without eating, groundhogs stuff themselves rather than conserving food. Although they are not known to drink water, groundhogs are said to get their liquid needs from the juices of food plants with the help of rain or dew.

On agricultural soil, the woodchuck burrow systems are viewed as a concern because farm machinery can damage a mound when it runs over one. And a lot of horse owners worry that their animals will trip over woodchuck holes in the paddocks and get hurt.

Woodchucks are shy animals, and they usually avoid human beings. However, woodchucks can become a menace if they invade gardens or yards in search of food. Woodchucks are also known to damage crops such as corn, wheat, and potatoes.

Woodchucks make good pets for people who have a place to provide them with natural habitats. The annual Groundhog Day celebration on February 2 has made the groundhog well-known in the United States and Canada.

Woodchucks occasionally consume field or garden crops, and they have the potential to quickly do significant harm. Woodchucks are unlikely to cause any damage between early November and late February because they hibernate. Deer or rabbits are more likely to cause damage during this time.

On agricultural soil, the woodchuck burrow systems are viewed as a concern because farm machinery can damage a mound when it runs over one. And a lot of horse owners worry that their animals will trip over woodchuck holes in the paddocks and get hurt.

There are occasionally even allegations that tripping in woodchuck burrows causes injuries to people. Although unlikely, this is one of the few threats to our own species.

In addition to their big size, groundhogs have various effective anti-predator behaviors. They often flee to the shelter of their burrow, which most predators won’t try to enter, but they are also prepared to fight off any assault with their keen claws and large incisors. They can climb trees as well to go away from danger.

Evicting from a Property or Residence

If you have a woodchuck living on your property, you may want to evict it. Evicting a woodchuck can be difficult, but there are some steps that you can take to try to get rid of it.

Woodchucks typically only have one entrance to their burrows, so blocking the entrance will force the woodchuck to find another place to live. You can also try using a live trap to catch the woodchuck and then release it in another location. If you have a pet groundhog, you should not try to evict it from your property.

Consider that breeding female woodchucks have dependent offspring in their burrows from late winter until spring or early summer before attempting to evict and exclude them. Doing so could be cruel. Even under extreme pressure, females will resist leaving their young behind. You’ll prevent them from surviving the winter.

In most locations, mid-to-late summer, or between early July and late September, is the optimal time to remove woodchucks from burrows. If you look closely, you might be able to spot the baby woodchucks as they make their first appearance above ground. If you do, you can start your eviction roughly three weeks later and be reasonably certain that it won’t affect their dependent children.

Woodchucks can carry diseases that can be transmitted to human beings and other animals. Woodchucks are protected by law in some states, and it is illegal to kill them without a permit.

On rare occasions, groundhogs may contract parasites, and a groundhog may pass on an infestation. It is not believed that woodchucks are a substantial source of any infectious diseases that can be passed on to people.

However, after rabies has fully taken possession of them, they are susceptible to becoming aggressive. This is why groundhog assaults without provocation must be taken very seriously due to possible rabies exposures.

Wire cage traps can be positioned at the main burrow entrance or in the wooded areas to catch woodchucks. Good baits include apple pieces, carrots, or melons.

Woodchucks may be reluctant to set traps if food is plentiful. It is forbidden to transport and release wildlife to another area; any caught animals must either be moved on the property or mercifully exterminated.

Medium-sized, hefty, and ground-dwelling squirrels are called woodchucks. John Griffin, director of Humane Wildlife Services, stated you would need a lot of woodchucks working over a long period to create tunnel systems that would pose any risk to a structure in an article titled “How to Humanely Chuck a Woodchuck Out of Your Yard” published on June 7, 2009, by the Humane Society of the United States.

We genuinely hope that this essay has assisted you in learning more about the amazing woodchucks. Keep visiting us to know more about the incredible world of animals!