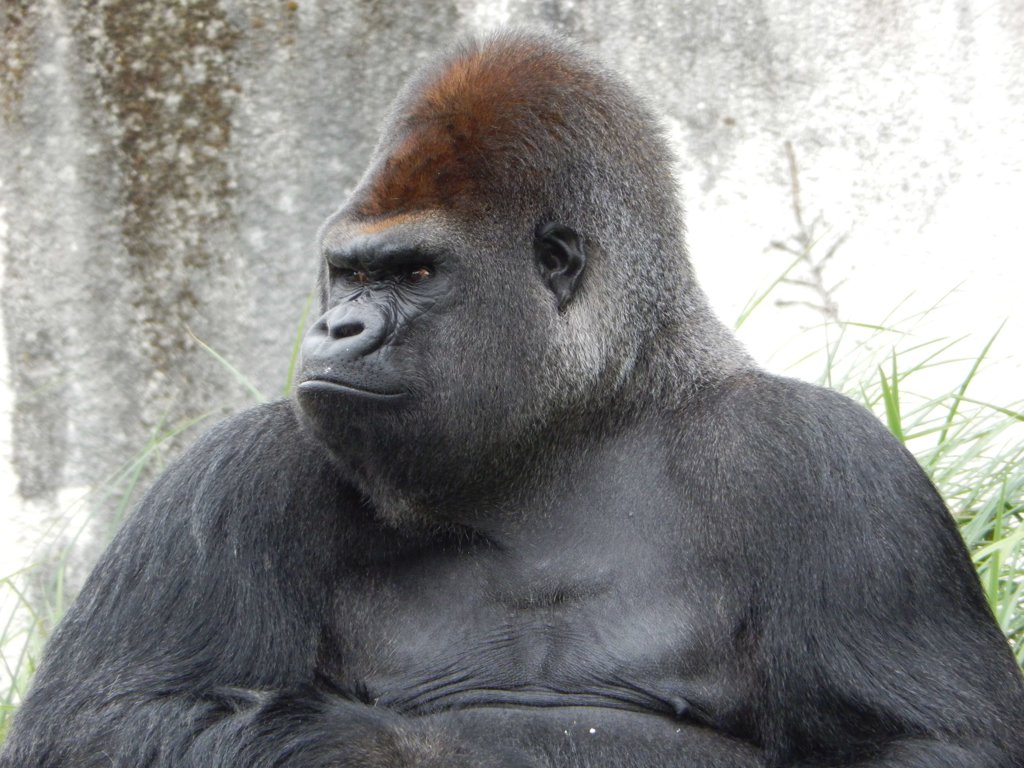 Gorillas are pretty awe-inspiring creatures, and it’s not hard to understand why they are often the stars of zoos and nature documentaries. They’re incredibly strong, and yet they are also gentle, sensitive, and intelligent. Their families are extremely close-knit, working together to care for their young.

Aside from their size and strength, a lot remains a mystery about these animals. This post will look closely at gorillas, exploring their habitat and behavior. Read on if you want to learn more!

Gorillas are a species of large ape that is native to the forests of central Africa. The gorilla is the largest living primate, with adult males reaching heights of up to 6 feet and weighing up to 400 pounds. Gorillas are vegetarians and spend most of their time eating leaves, fruits, and stems. They live in family groups led by a silverback male and are known for their close family bonds and gentle nature.

They have black fur and can grow to be 1.7 to 1.8 meters (5.6 to 5.9 feet) tall when standing upright. Males are much larger than female gorillas and can weigh twice as much. Silverback gorillas get their name from the line of silver hair that runs down their back from their neck to their tailbone. This line of silver hair is only found on male gorillas.

Gorillas have big hands and feet with long fingers and toes. They use their hands and feet to help them climb trees and walk upright. Gorillas have long arms that they use to swing from tree to tree. Their chests are barrel-shaped, and their necks are short. They have small ears, and their noses look flat because they don’t have a lot of cartilage. Gorillas have sharp canine teeth that are used to threaten other gorillas or predators.

Gorillas are vegetarians or herbivores and eat mostly plants, including bamboo shoots, leaves, stems, roots, and fruit. They will also eat insects on occasion. Some of their favorites include:

Gorillas spend most of their day eating and can consume up to 30 pounds of vegetation daily!

Gorillas are found in the forests of central Africa. The largest populations are in the countries of Rwanda, Uganda, and the Democratic Republic of Congo (DRC). Smaller populations can be found in Cameroon, the Central African Republic, Angola, and Gabon.

Gorillas are gentle giants that live in close family groups. A group, or “troop,” of gorillas is led by a silverback male and typically consists of his wives and children. The silverback is the leader and protector of the group. He decides where the troop will go to find food and shelter. Females and young males make up the rest of the troop.

Adult females typically give birth to one infant at a time. Gorillas are very social animals and spend most of their time eating, grooming each other, and resting. They are also known to build nests out of leaves and branches to sleep in at night.

They are the largest of all primates, and their size and strength make them seem imposing. But in reality, gorillas are shy, gentle creatures. They are vegetarian, eating mainly plants and fruits.

Gorilla infants stay close to their mothers for several years. During this time, they learn important skills like finding food and caring for their own infants when they become adults. Adult gorillas are usually peaceful and calm. However, silverback males can become aggressive if they feel their troop is threatened.

Gorilla reproduction is characterized by a very long gestation period and late sexual maturity. Females usually give birth to only one infant at a time, though twins are not unheard of. The typical interbirth interval is about four years.

Gestation lasts around 8.5 months, after which the mother typically gives birth to a single infant. Twins are rare, occurring in just 2% of births. Newborn gorillas weigh between 2 and 4 kg (4.4 and 8.8 lb). The young gorilla stays with its mother for at least the first three years of life, sometimes longer. During this time, it learns the skills it needs to survive in the wild.

Gorillas become sexually mature at around eight years old. However, they do not typically start breeding until they are 10 to 12 years old. Females usually give birth for the first time between the age of 12 and 15

Gorillas have a life expectancy of around 35 years in the wild. However, captive gorillas often live much longer, with an average lifespan of 50 years.

Gorillas live in family groups of 2-30 individuals. The family is led by a silverback male, the dominant group member. Silverback males are typically around 12 years old when they assume the group’s leadership. Females and young gorillas make up the rest of the group.

The eastern gorilla is the largest living primate. An adult male can weigh up to 138 kg (304 lbs) and a female up to 100 kg (220 lbs). Eastern gorillas are slightly taller and more muscular than western gorillas. They have long hair that covers their entire body, except for their face, hands, and feet. The eastern gorilla has a large head with prominent brows and a stout build.

The coat of eastern lowland gorillas is usually black but can also be brown or red. Adult males develop a silver-grey patch on their back and buttocks, which is why they are also known as ‘silverbacks.

The western gorilla is smaller than the eastern gorilla. Males can weigh up to 136 kg (300 lbs) and females up to 68 kg (150 lbs). They have a more slender build, and their arms are longer than their legs. Western gorillas have shorter hair that covers their entire body, except for their face, hands, and feet. The coat of a western gorilla is usually black but can also be brown or red.

The hair on their head is shorter and thinner than that of eastern gorillas. Western gorillas also have prominent brows and a stout build.

The cross river gorilla is the most endangered subspecies of gorilla. It is found in the montane forests along the Cross River in Cameroon and Nigeria. These gorillas are similar in size and appearance to the western lowland gorilla.

They have a dark brown or black coat that covers their entire body, except for their face, hands, and feet. Cross river gorillas also have prominent brows and a slender build. Their arms are shorter than their legs, and they have opposable thumbs on their hands and feet.

The mountain gorilla is the largest subspecies of gorilla. They are stocky animals with short necks, broad chests, and large hands and feet. Mature Males can weigh up to 450 pounds (200 kilograms), while females weigh about half that amount.

Mountain gorillas have thick, dark brown or black hair covering their entire bodies except for their faces, ears, hands, and feet. Their hair is longer and thicker than other gorilla subspecies and provides insulation against cold mountain temperatures.

Mountain gorillas have large, dark eyes set on a hairless face. Their mouths are small with prominent canine teeth. Adult mountain gorillas also have well-developed muscles in their chests and shoulders, which gives them a hunched appearance when they walk on all fours.

Gorillas are the largest of all the primates. The main predator of gorillas is humans. Leopards, eagles, and crocodiles also hunt them.

Gorillas primarily eat plants. They also eat insects, small mammals, and fruits. Gorillas are important to the rainforest ecosystem because they help spread seeds and clear the forest floor from dead leaves and branches.

Gorillas have few predators in the wild, but humans are their biggest threat. They are poached for their meat and body parts, then sold on the black market. Habitat destruction is also a major problem for gorillas. As humans continue encroaching on their territory, gorillas are forced into smaller and smaller areas.

Human activities like logging, mining, and farming are severely damaging their homes. Habitat loss occurs when humans destroy forests for agriculture or development. This leaves gorillas without a place to live and find food. Poaching is the illegal hunting of gorillas for their meat or body parts.

Gorilla meat is considered a delicacy in some parts of Africa, and their body parts are used in traditional medicine. They are sometimes captured and sold as pets or used in zoos and circuses.

What Is the Conservation Status of Gorillas?

The gorilla is currently listed as “critically endangered” by the International Union for Conservation of Nature (IUCN). This means that they are at risk of becoming extinct in the wild. Their population has declined by 60% over the last 25 years.

Gorillas in zoos can be found in many countries around the world. There are currently over 400 gorillas living in zoos. The first gorilla species that lived in a zoo was captured in the wild and brought to Europe in the late 19th century. Gorillas have been kept in zoos since then, and their popularity has grown steadily. Today, gorillas are one of the most popular animals in zoos.

The Gorilla Foundation was founded in 1977, and the foundation’s goal is to preserve gorillas. The organization seeks to accomplish this objective by supporting conservation projects and educating the public about the importance of gorilla conservation.

The International Union for Conservation of Nature (IUCN) is also working to safeguard gorillas since 1963. The Jane Goodall Institute (JGI) and the Gorilla Conservation Fund (GCF) are all working to conserve the gorilla population. These organizations work in Africa to protect gorilla habitats.

How Can You Help?

For example, some companies donate a portion of their proceeds from selling certain products to gorilla conservation organizations. Finally, people can help protect gorillas by spreading awareness about the importance of gorilla conservation and working with local communities to build a peaceful relationship with them.

Gorillas are a unique species that are sadly facing extinction. There are many ways that people can help protect gorillas, and it is important to spread awareness about the importance of gorilla conservation. By working together, we can make a difference for these amazing animals.