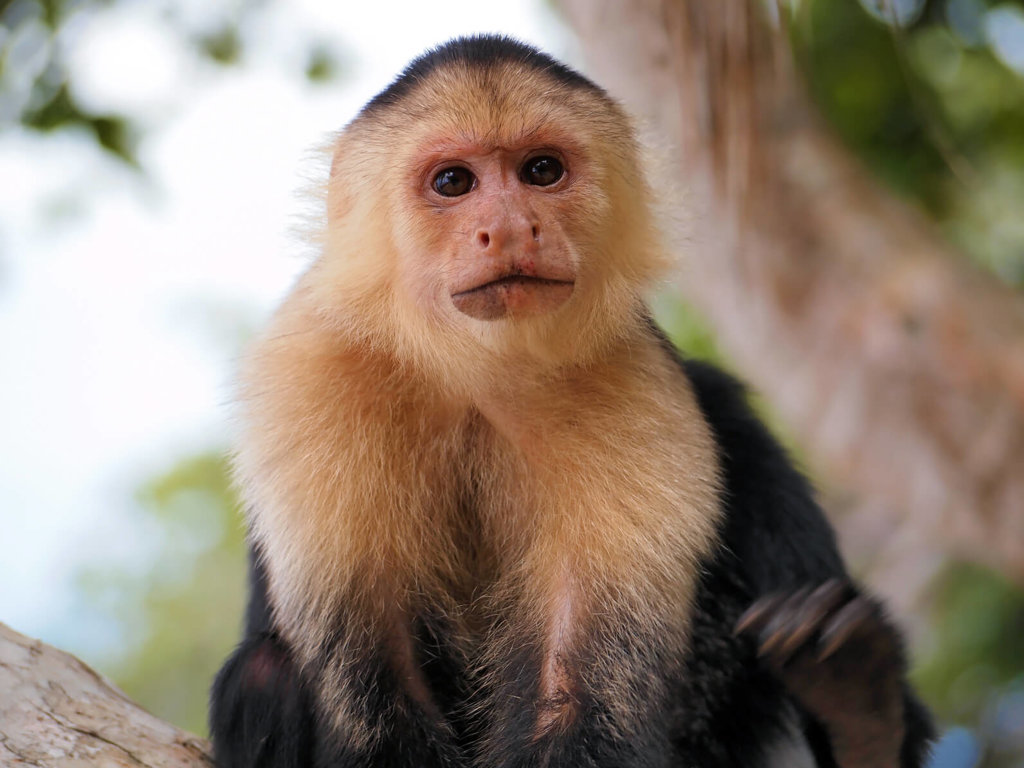 Capuchins were first described by scientists in 1519 and are named after their characteristic “cap” of hair.

Capuchin monks are one of the oldest monkey species in existence, with fossils dating back over 40 million years ago. Capuchins have long been associated with humans, as they were often kept as pets by Native Americans and early European settlers in America.

The term “capuchin” refers to a group of Franciscan friars known as the Order of Friars Minor Capuchin, who dressed in brown robes with large hoods. Most new world monkeys also belong to the genus Cebus albifrons.

Portuguese explorers discovered little monkeys in the Americas in the 15th century whose coloration resembled these friars, particularly when they were dressed in their robes with the hoods down, and they christened them capuchins.

A specimen (believed to be a golden-bellied capuchin) was described by scientists, who noted that: “His muzzle of tanned color, with the lighter color around his eyes that melts into the white at the front, and his cheeks give him the looks that involuntarily remind us of the appearance that historically in our country represents ignorance, laziness, and sensuality.”

They have long and slender bodies, with long limbs and short trunks. They have five fingers on each hand and five toes on each foot, which are all equipped with nails instead of claws.

They are small primates that weigh between 2-5 kg (4-11 lbs). They have dark brown or black fur, with a paler “cap” of hair on their head.

They have large brains for their body size and are considered to be one of the most intelligent monkey species. They live with other monkeys and share a variety of behaviors.

They are found in Central and South America, from Honduras to Brazil. They typically live in tropical rainforests, but can also be found in dry forest and Savannah habitats. They are arboreal animals and spend most of their time in the trees.

They favor habitats like low-lying forests, mountain forests, and rain forests that provide them with easy access to food and shelter. Argentina, Brazil, Costa Rica, Honduras, Paraguay, and Peru have the highest concentrations of them. These locations serve as their shelter at night and access to food throughout the day.

The capuchin monkeys’ natural ability to climb trees effortlessly allows them to flee and hide from predators on the jungle floor. The canopy of the trees provides refuge from the dangers above.

Both the ecology in which the capuchins live and their benefit from this setting helps to sustain our ecosystem. This is because they scatter their remaining seed and feces on the forest floor, which encourages the growth of new plants and increases the existing plentiful plant life.

Capuchins are omnivorous animals and their diet consists of fruits, nuts, seeds, insects, and small vertebrates. They have been known to use tools, such as sticks, to help obtain food from hard-to-reach places.

Compared to other monkeys in the family Cebidae, the capuchin monkey consumes a wider variety of foods. As omnivores, they eat a wide range of plant parts, including leaves, flowers, fruit, seeds, pith, woody tissue, sugarcane, bulbs, and exudates, as well as arthropods, mollusks, various vertebrates, and even primates.

Old stone tools recently discovered in Capuchin habitats raise the possibility that they recently transitioned from little nuts like cashews to larger and harder nuts. Additionally, it has been noted that they are very skilled at collecting frogs.

They are known as creative and extreme foragers since they can survive by eating a variety of strange foods, which may ensure their survival in environments with severe food shortages. For food, capuchins who live near water can also crack the shells of crabs and other crustaceans.

Female capuchins give birth to a single infant after a gestation period of 140-150 days. The infant is born with fur and is able to cling to its mother’s fur. Infants are weaned at around 6 months of age but will stay with their mother for several years.

Although they are easily adapted to human-colonized areas, capuchin monkeys frequently live in big groups of 10 to 35 individuals in the wild. Most proceptive and mating behavior in capuchin females is frequently directed at the dominant male.

However, once the female’s proceptive stage is through, she may occasionally mate with as many as six inferior males in a single day. Not all females specifically target the alpha male; some have been seen mating with three to four different males.

The more dominating female will have priority over the lower-ranking one when mating with an alpha male when there are two alpha females involved.

Age and sex-based hierarchies are distinct within the Capuchin order. Typically, a single dominant male will rule the group and get first dibs on mating with the females. The white-headed capuchin groups, however, are headed by a dominant male and a dominant female.

Since each group’s members must look for the optimal places to feed, each group will cover a huge region. These primates are territorial animals; they identify the center of their territory with urine and guard it against intruders, even though the edges of their territory may overlap.

The Capuchin Monkey is classified as least concerned by the IUCN Red List. However, they are considered to be endangered in some parts of their range due to habitat loss and hunting for the pet trade.

Capuchins are threatened by habitat loss and hunting for the pet trade. They are also sometimes killed for their meat.

The destruction of the forest has less of an influence on capuchin monkey populations than it does on other species because they have a rapid rate of reproduction and can easily adapt to their surroundings, yet habitat fragmentation is still a concern.

Jaguars, cougars, jaguarundis, coyotes, tayras, snakes, crocodiles, and birds of prey are examples of their natural predators. The harpy eagle, which has been observed taking many young capuchins back to its nest, is the primary predator of the tufted capuchin.

Capuchins are social animals that live in groups of up to 40 individuals. These groups typically consist of adult females and their young offspring. Males will leave their natal group when they reach adulthood and will either live alone or join another group of males.

Capuchins are diurnal animals and spend most of their time foraging for food or resting in the trees. Capuchins are highly intelligent and are known for their use of tools, such as using sticks to obtain food from hard-to-reach places.

It has not been decisively confirmed or disproven if capuchin monkeys have a theory of mind or whether they can understand what another creature may know or think.

Capuchin monkeys can learn to rely on the knower if they are put in a situation where one trainer can be seen to know where the food is while the other trainer can only guess. Since the monkeys may have acquired the ability to distinguish between knower and guesser through other sources, this has been rejected as conclusive proof of a theory of mind.

It was once thought that non-human great apes did not have a theory of mind either, but the current study suggests that this may not be the case. Human infants frequently acquire a notion of mind.

Capuchins have long been used in research due to their high intelligence. They are also popular as pets due to their small size and cute appearance. However, they can be aggressive animals and are not recommended as pets for first-time primate owners.

They are frequently referred to as “nature’s butlers” and are also used as service animals. In a similar way to mobility assistance dogs, one organization has been training capuchin monkeys to serve as “monkey helpers” for quadriplegics.

The young monkeys are socialized in a human environment before undergoing lengthy training and being paired with a quadriplegic. The monkeys assist around the house by performing duties like getting items, turning on and off lights, and opening drink bottles.

The Americans with Disabilities Act’s definition of a service animal was updated by the federal government of the United States (ADA). The ADA no longer recognizes non-human primates as assistance animals.

Because of concerns about animal welfare, the American Veterinary Medical Association opposes the use of nonhuman primates as service animals. The possibility of people being seriously injured, as well as the possibility that primates could infect humans with harmful diseases

Capuchin monkeys are intelligent and simple to handle. As a result, they are employed by many wealthy nations to assist quadriplegics. They are also frequently kept as pets, used as street entertainment, and hunted by locals for their flesh.

Mutual grooming helps to stabilize group dynamics, and the monkeys communicate with each other using a variety of cries. Their vocal communication serves a variety of purposes, including establishing contact, alerting one another to predators, and forming new groups.

The development of attention in society is directly influenced by the capuchins’ social experiences. Within several groupings, they produce novel social behaviors that denote various forms of interactions. These comprise tests of friendship, confrontations with adversaries, and intimate acts with children.

As a result, social rituals are developed that are intended to gauge how strong social ties and dependence on social learning are.

Hope you enjoyed reading this article!