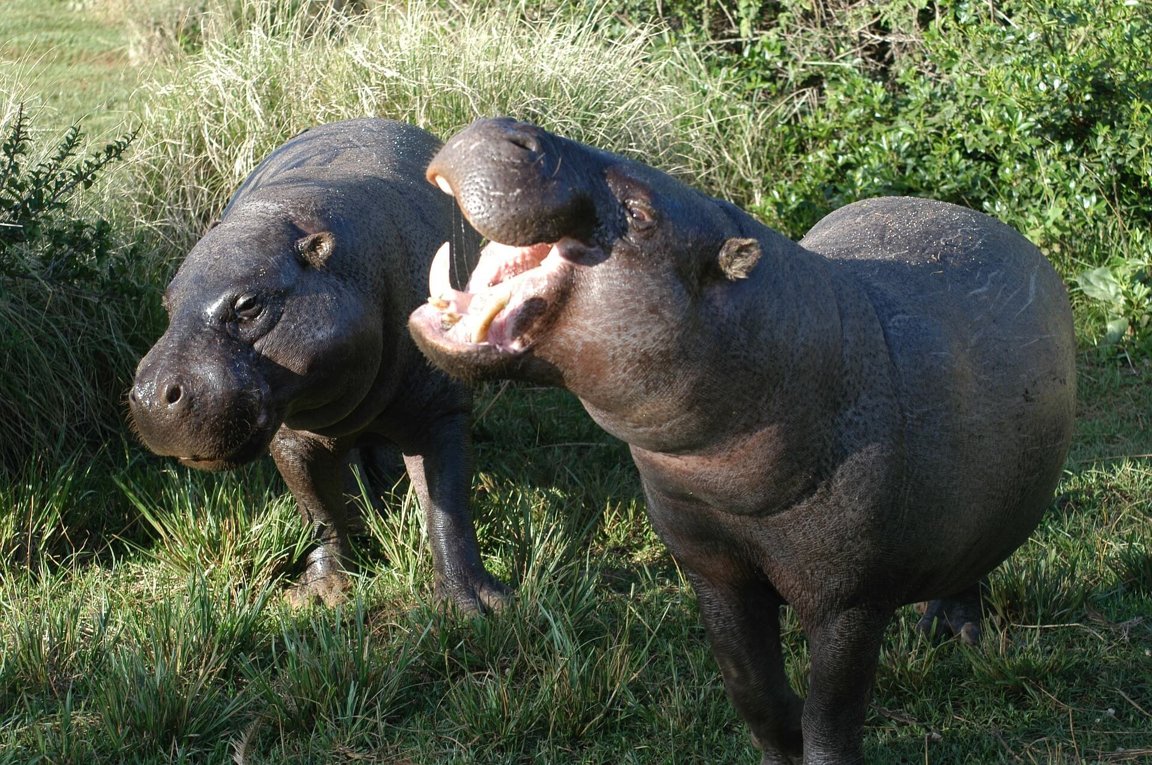 Pygmy Hippos are one of the world’s rarest mammals. As their name suggests, they are much smaller than common hippos and are only found in a few remote locations in Africa. Pygmy hippopotamus may be small, but they are mighty! These little guys may not be as well known as their larger counterparts, but they are worth getting to know.

They are found only in West Africa in the countries of Liberia, Guinea, and Sierra Leone. Pygmy Hippos are smaller than their larger relative, the Common Hippopotamus (Hippopotamus amphibius). A common hippopotamus can grow to be twice the size of pygmy hippopotamuses.

If you are interested in learning more about these amazing animals, keep reading. You would not regret it!

The pygmy hippopotamus (Choeropsis liberiensis) is closely related to the more familiar and much larger common hippopotamus. The two species are similar in many ways, but the pygmy hippo is smaller, with a body length of only about 1.5 meters (4.9 feet). Pygmy hippos weigh about 275 kg (606 lb).

It also has a more compact build, shorter legs, and a shorter tail. The muzzle is also more rounded than that of the common hippo. The pygmy hippo’s teeth are less valued than their cousins’ and have only one pair of incisors.

The thin skin of a hippo allows it to sweat quickly in the sun, resulting in oozing pink fluid that gives the animal a wet or glossy look. The fluid secreted by a pygmy hippo, called blood sweat, helps to protect its delicate skin from ultraviolet radiation.

Pygmy hippos are found only in the forests and swamps of western Africa, primarily in Liberia, but also its smaller populations occur in Sierra Leone, Ivory Coast, and Guinea. They are generally solitary animals, except for mothers with young calves. They make some sounds, including a high-pitched squeak and a low grunt.

Pygmy hippos spend the daylight hours hidden in dense forest habitats, as they are nocturnal animals. At night they emerge to feed on semi-aquatic plants, grasses, and fruits. Although pygmy hippos have been known to venture out onto land during the day if conditions are cool and overcast, they generally prefer to avoid exposure to direct sunlight.

The pygmy hippopotamus is found in primary and secondary forests, swamps, and rivers. Males are territorial and will defend their territories from other males. Females usually have a home range that overlaps with several male territories.

Pygmy hippos live in Liberia, Sierra Leone, Guinea, and Ivory Coast. The majority of the population is found in Liberia.

Pygmy hippos are herbivores, meaning their diet consists mainly of plants. They primarily eat leaves, fruits, and roots, but they will also occasionally eat small invertebrates. Depending on food availability, pygmy hippos may spend up to 16 hours a day foraging.

Like other herbivores, pygmy hippos have a four-chamber stomach that ferments food to extract the maximum amount of nutrients. Pygmy hippos also have specially adapted intestines that absorb more nutrients from their food than other types of hippos.

Pygmy hippos drink water for about an hour each day, but they can also get the moisture they need from the food they eat.

Pygmy hippos are typically solitary creatures, but they can be found in pairs or small family groups of 2-5 individuals. These groups typically consist of a single adult male and several females with their young. Males and females only come together during the breeding season.

They are mainly nocturnal animals but may be active during the day if undisturbed. When resting, pygmy hippos lie in shallow water and wallow in mud pits. They also rest in dense vegetation or caves and hollow trees. At night, they forage for food on the forest floor.

While Pygmy hippopotamus generally avoids contact with humans, they can be aggressive if they feel threatened. When angered, they may charge at an intruder or bite. They are good swimmers and can stay submerged for up to six minutes at a time. They walk underwater instead of swimming to keep their body temperature cool.

It is unclear whether the pygmy hippopotamus reproduces sexually or asexually. However, what is known is that they reach sexual maturity at around three years old. The mating season for pygmy hippos is typically between January and April. During this time, the males will become aggressive and will fight with each other for the opportunity to mate with the females.

Once a male has won the chance to mate, he will follow the female around until she is ready to reproduce. The gestation period for a pygmy hippopotamus is about six months long. After giving birth to a single young, the female will care for her baby for about a year before they can fend for themselves.

Pygmy Hippopotamus as a Predator

They are vulnerable to some animals, including large cats and crocodiles. While pygmy hippos are not typically aggressive, they will defend themselves if they feel threatened. Their powerful jaws and sharp teeth can inflict serious injury on their attackers.

The leopard is the only natural predator of pygmy hippos species in the wild. Humans have been hunting pygmy hippopotamus for their meat and hide for centuries.

Pygmy hippos are endangered due to habitat loss, deforestation, and hunting pressure. Although they are protected by law in most of their range countries, enforcement of these laws is often lax, and illegal hunting continues. In addition, converting forested areas to agriculture poses a serious threat to pygmy hippo populations. As a result of these threats, the number of pygmy hippos in the wild is estimated to be only about 3,000.

The pygmy hippo is listed as Threatened species on the International Union for Conservation of Nature (IUCN) Red List. An estimated 2,000-3,000 individuals are remaining in the wild.

The Pygmy Hippo Foundation works to protect pygmy hippos in their natural habitat. This foundation funds research, education, and conservation projects in Liberia.

Conservation efforts are underway to help save Pygmy Hippos from extinction. Hunting of Pygmy hippopotamus is banned in Liberia. The World Wildlife Fund (WWF) is working to protect their habitat and raise awareness about the importance of saving this rare mammal.

What Can You Do to Help Them?

There are many ways you can help protect pygmy hippos. You can support organizations working to conserve them, spread the word about their plight, and donate to conservation efforts. Every little bit helps, and we can make sure these amazing animals have a future.

Pygmy hippos are interesting creatures. Pygmy hippos are also an endangered species with a declining population. The Pygmy Hippo Foundation is working to protect pygmy hippos and their habitat. The future of the pygmy hippo is uncertain, but conservation efforts are underway to protect this unique and fascinating animal.

So, if you see one of these little guys, consider yourself lucky!