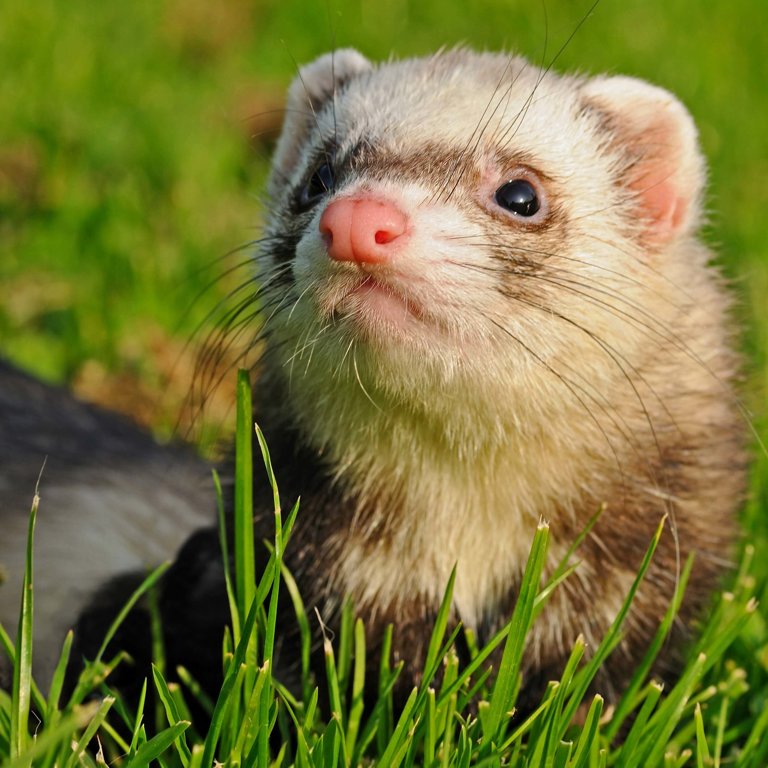 Ferrets as pets might not be as popular as dogs or cats, but the fact is that they have been kept as domesticated animals for over 2000 years and they make great pets!

They are very active and playful but are quiet for most parts of the day. They are a lot of responsibility but if you love being on your toes and tending to your pet babies makes you happy, you might be the right parent for them. Get ready for all the mischief though!

Domestic ferrets are the descendants of the European polecat and are a member of the weasel family. Historically, they were used to hunt rabbits and rodents- small animals that live in dug holes underground. As ferrets love to explore narrow burrows and holes, they were an excellent choice to stop expanding rats and mice.

People might mistake ferrets for being closely related to rodents, but in fact they are more like cats as they are carnivores. Although they are small creatures, they have big personalities and are incredibly smart.

Ferrets resemble other mustelids like minks and badgers. They have long, slender pear shaped bodies. The average length from head to tip of tail is about 50 cm, approximately 20 inches. They weigh about 0.7 to 2 kg and vary in color from black, brown, white or a mixture of these. Male ferrets are bigger in size than female ferrets. They have an average life span of 5-7 years but the most recorded age is 14 years.

Pet ferrets are a source of constant entertainment for their owners. They are playful and mischievous. They are incredibly active when they are not sleeping – which, by the way, they can do for upto 20 hours a day. They love playing with toys, running around and getting into things.

They are also very sociable. They do better with the company. If you are considering buying them as pets, having them in pairs would be a great idea. They are generally good with other pets like cats and dogs but you should keep them away from birds, rabbits, and mice or hamsters. They have natural instincts of hunting rodents so it is not recommended.

Also, children and ferrets might not be a good idea for each other. Ferrets are small and are prone to injury if they are dropped from hands. Young ferrets also sometimes do nip so kids should be kept away.

Ferrets are brilliantly smart creatures. They learn things very quickly and in a few attempts. It might be a good idea to start at an early age as young ferrets get tamed faster. They are good at problem solving and love toys that allow them to do so.

They can easily be litter trained. Although there might be a few accidents. Ferret owners should train them to litter in and out of their cage. It would be helpful to get it done on walks too .

Ferrets are really small and can get into nooks and corners. You might lose them inside the house as well. Make sure you train them to come to a sound of squeak or whistle to avoid this.

It is easy to feed ferrets. If it is legal in your country to feed them, you will find pre-made ferret food in most pet stores. They are obligate carnivores so they love meaty treats. You can also give them cat treats but moderately.

They have fast metabolism so they need frequent meals. Their natural diet includes raw meat and bones.

Ferrets Are Illegal in Some Places

Before buying your pet, you must be aware that they are considered banned or illegal in some parts of the world. In the US, they are completely banned in California, Hawaii, Washington DC and New York City.

They are also banned in countries like Australia, Puerto Rico, South Africa and Portugal. There are many reasons but the most prominent is that they are considered a pest in these areas and keeping them as domestic pets is not allowed.

Things You Should Know Before Getting a Ferret

Ferrets are very curious and excitable. They have a fast metabolism and hence are high on energy. They need to play and run around the place to keep them sane. You can easily put them on a leash and take them outside for walks.

Ferrets Get Into Everything

Ferrets love exploring and would nibble on almost everything out of curiosity. They are also very tiny and squeeze easily through spaces. For this reason, they should be kept in a secure cage. It would be a good idea to put them in a collar with a bell so that you know about their whereabouts.

However, they should not be caged 24 hours a day. It is a good idea to make a playing area inside the house and make it ferret-proof. They can pass through very tiny spaces so, block the bottoms of the doors, the openings and windows and spaces behind machines and fridges, etc. it is important to do so to keep them out of harm, if they manage to escape the house, they will not be able to survive in the wild for long.

Ferrets Are Prone to Serious Diseases

Ferrets, like other pets, should go to vet regularly. Take them immediately after you buy them for check ups. Ask for the vaccines from your vet specially for rabies virus. They are prone to getting fleas and might need monthly preventives.

A pet ferret should have yearly veterinarian visits until it is 5 years old and then 6-monthly checkups after that. It is important to neuter them, especially a female ferret, as it can stay in heat until mated. This causes distress and fatal anemia. Luckily, most ferrets in the USA are already neutered when sold.

They are sensitive to temperature and should be kept outside of direct sunlight. Their hammocks and cages should be in cool dark places.

Pros & Cons of Keeping a Ferret as a Pet

Once you get to know ferrets, you will fall in love with their personalities. They are notorious for being hyperactive but if you love your pets for the attention they seek from you, you can use this to your benefit. Although, you should know that they require a lot of care to keep them safe and healthy. Just look after their dietary, medical and social needs and have your house filled with joy at all times!