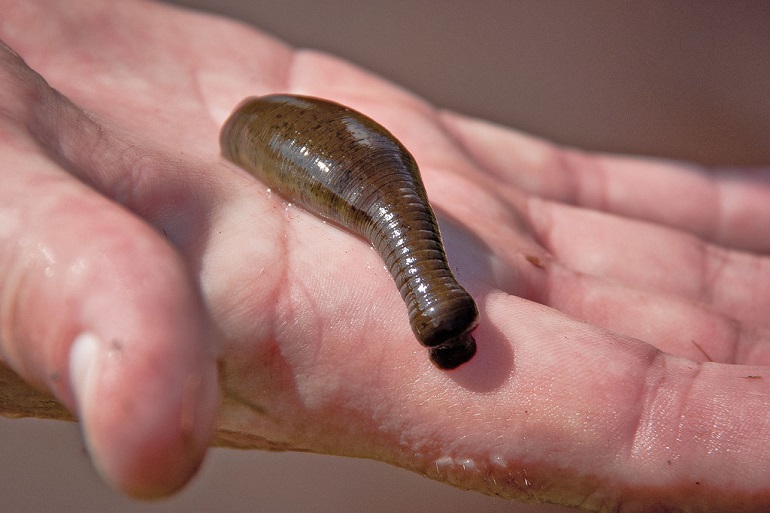 Leeches are parasitic blood suckers that derive food from sucking blood of fellow living beings, including fish. They can be found at any place, given that the environment suits their ecological needs and, obviously, a source of blood. Leeches eggs are small and can be found on surfaces of several things and that even includes water. Likewise, leeches can travel seamlessly to enter into your aquarium through multiple ways and variable sources.

The moment you discover clingers moving around in water, the first thought that comes into your mind is how they got into your fish tank and how will you get rid of these bloodsucking parasitic monsters? Since, leeches are definitely not cute. Good news is that the ugly predators are not found in freshwater aquariums. The answer is available in this article that will discuss ways to get rid of leeches before they hurt your precious marine friends.

How Did Leeches Get In My Fish Tank?

Leeches get into a pond through a number of sources and sometimes figuring the source out can be impossible. However, consider the possibility of the following sources that might be responsible for introducing leeches in your pong. Among the many reasons for leech introduction, the following are the most common:

Will Leeches Kill My Pond Fish?

Leeches are bloodsuckers that quickly reproduce through sucking the blood of fellow living beings. Leeches quickly attach themselves to fish and insert their teeth inside the skin of the fish and start sucking blood. Leeches have three jaws with sharp teeth that easily bite into flesh that increases the blood flow of fish that keeps the infected area from healing.

Small leeches are not easy to locate when attached to your fish making it impossible to figure their presence. You can figure if your fish is bitten by observing the following symptoms:

If the leech is not fully detached and the fish is not healed through medication, then the fish will die.

7 Ways To Get Rid Of Leeches In Your Fish Tank

Once leeches enter your aquarium, Getting rid of them might seem like a challenging task to you, but there are several ways to kill leeches. The ways to kill leeches are simple yet require focus to do them right. The 7 popular ways to get rid of leeches in your fish tank are discussed and will help you in getting the best idea of the most suitable way to kill these clingers.

Salt Dip To Get Rid Of Leeches

Before adding salt, take a few precautionary measures to avoid any drastic impact on your fish and other aquatic worms. Also, it is possible that leeches might hide in the gravel after the addition of salt, leaving no point for doing this. Also, it is better that you first remove all aquatic animals, plants, along with other decorations in the aquarium and dip them in salt. Finally, add salt in high concentration in tank water to target leeches.

Salt is a safe ingredient to target leeches and when used in the recommended dosage, it kills many unfriendly parasites and keeps your salt-sensitive fish safe from infections without harming the beneficial bacteria.

It is recommended to use pure sodium chlorides like kosher salt or rock salt and avoid using iodized salt or salt with impurities as these types of salts can be harmful. Salt can also be used to kill pond leeches and aquarium leeches.

Copper To Get Rid Of Leeches

Chemicals containing copper are the best to kill leeches in aquariums.

It may not impact most aquatic animals but in case if you have any shrimps, snails, Or other valuable invertebrates, it may be harmful or any other special invertebrates then using copper will be like murdering these special species.

If your aquarium have fish and plants, then using copper can be an efficient solution

Bleach To Get Rid Of Leeches

Bleach is yet another effective agent to get rid of leeches in aquariums. However, bleach is not effective against eggs of leeches and will only kill aquarium and pond leeches. So, basically the basic cause of the problem might stay. So, you will need to use bleach several times for several days.

Bleach mixed with water will not be safe for your fish, plants, and other species as chlorine is harmful owing to the high acidic nature which is never good for any living organism.

Before starting the phenomenon, remove fish, plants, and other decorations to avoid any mismanagement or accident in the process and make sure to dip them in bleach mixed water. Afterwards, rinse them in running water to dechlorinate them and only then you can put them back in the aquarium

Hydrogen Peroxide To Get Rid Of Leeches

Hydrogen peroxide is another agent to get rid of unwanted leeches but the same is not effective for all types of leech species. It can only act upon some pond leeches and leave the others, which can be alarming.

If sensitive fish and plant species reside in your aquarium then you can use this solution first as H2O2 rarely affects badly in an aquarium. If leeches still manage to survive then you will have to use stronger medication to get rid of most leeches.

Potassium Permanganate Dip To Get Rid Of Leeches

Potassium permanganate is also one of the safe solutions to help you get rid of aquarium and pond leeches. However, you must not use any more than 2ppm concentration of KMnO4 to an aquarium as concentrations above the mentioned value will have drastic and harmful impacts on your fish and plants.

The process will require greater focus and precautions to make sure that your fish and plants will not be harmed.

Hydrogen permanganate can be harmful to sensitive fish so make sure before using this solution, consider checking for any sensitive fish and remove it before the initiation of the process.

Manually removing leeches is possible when they are on plants or decorations. But, you cannot remove any leech that might be attached to your beloved fish, busy in sucking their blood. In such conditions, manual removal of a leech is not possible.

To remove attached leeches from fish, you will have to salt bath your fish, or use other medication or solution to kill the leeches. This method will only kill leeches but not leech eggs. So, additional methods, like the addition of salt, will have to be used to eliminate eggs as well.

Aquarium Leech Traps To Get Rid Of Leeches

Aquarium leech trap to get rid of leeches is an effective manner to remove planaria, planarian flatworms, and leeches from your tank water without chemicals or medications. It is known by the name of Planaria traps.

Aquariums that inhabit sensitive fish and plants, this is the most suitable choice as it is possible that sensitive fish types might get negative impacts from the use of chemicals, as in previously discussed methods, chemicals are used for the purpose.

The Planaria traps are baits in which favorite foods of leeches are placed like raw pork liver, dead fish, shrimp, and meat. Then dip the trap in water after making holes in it. Place it upside down in the substrate. The leeches will start to gather inside the bait to eat their favorite food and get trapped inside seamlessly.

Then you remove the bait from the aquarium, asking with the leeches. This method is effective for only leeches and cannot trap leeches eggs which can be problematic. You can use salt to get rid of leeches eggs once the trap process is complete.

The name is enough to suggest that the snail leeches feed on the blood of snails. If you are an owner of an aquarium having a large population of snails, then beware of this species of leeches and keep an eye on your snails’ wellbeing.

If snail leeches reach your aquarium, you will notice a sharp decline in the population of your snails. If this happens, then you should find ways to combat the snail leeches. Snail leeches drain all the blood of a snail within days.

Asian leeches feed on shrimps, and small earns. If you are an owner of an aquarium having lots of shrimps then beware of the Asian leech as they mercilessly drink the blood of the small shrimps and you might not even notice.

The presence of an Asian leech is a real threat that can be wiped off through Planaria traps. They are harmful brown color leeches that look like an earthworm. This predatory leech travels around mostly during the aquarium trade from Asia.

As the name implies, these harmful leeches feed on the blood of fish and do not stop sucking their blood until the fish dies.

Fish leeches are long, warm-like predators that are most commonly introduced in an aquarium through worms.

Luckily, this leech type is seldom found in aquariums.

Resembling detritus worms, these leeches feed on other worms and leeches. Furthermore, detritus worm leeches love to feed on baby shrimps and tend to kill baby shrimp so they can be dangerous in aquariums having a large population of shrimps.

Leeches are dangerous blood-sucking predators that pose a great threat to aquatic life and finding such dangerous beings in your aquarium can be really scary and you may need to look for ways to combat this menace.

Usually leeches may reach an aquarium through different means and the most common is the addition of new fish in the water body. The leeches can be killed by using a number of methods as discussed in this write-up and the most effective method is the use of salt bath to get rid of the leeches. Leeches can kill your fish, if not killed properly. So, you must use any of the above-discussed methods to ensure the well-being of your aquatic pals.