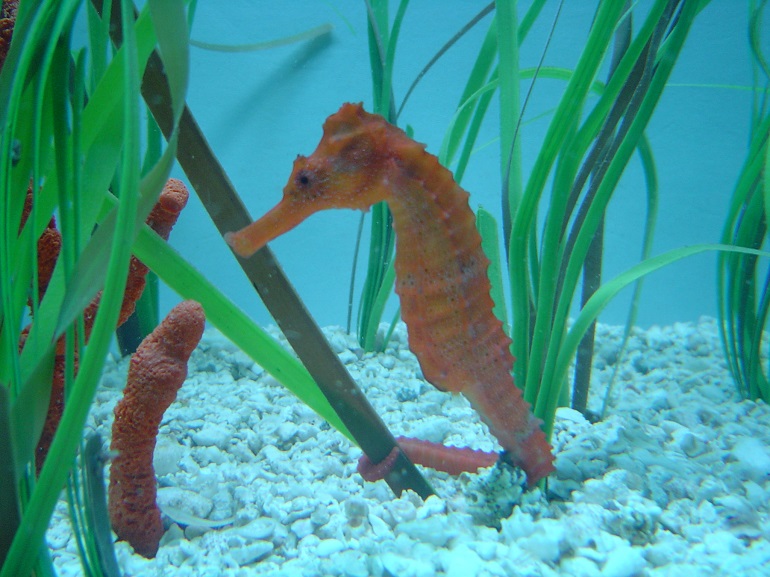 The Most Graceful Creatures in the Water!

Who knew that water could be so diverse? Within just a few feet of shoreline, you can find an amazing array of creatures swimming and darting. Today, we’re going to look at one of the most graceful and well-known creatures in the water: the seahorse.

Seahorses are fish known for their horse-like heads and long, curly tails. These interesting creatures are found in temperate and tropical waters worldwide. Seahorses range in size from about 2.5 centimeters (1 inch) to 35 centimeters (14 inches) long.

Seahorses have been around for millions of years and are responsible for one of the first backbones in fish. You might recognize them from their large, protruding eyes or long snout. But did you know that they can swim backward and upside down? Or that they hold their young in their pouch until they are ready to hatch? Seahorses are truly amazing creatures! Let’s learn more about seahorse species!

The name “seahorse” can be traced back to the Old English word for horse, seahorse. The first recorded use of this word was in the early 15th century. Seahorses are fish species of the family Syngnathidae. The term syngnathid refers to any group member, including seadragons and pipefishes.

Seahorses occur in tropical and temperate waters throughout the world. Most species are found in shallow seagrass beds and coral reefs in the Indo-Pacific region, with a few species in temperate waters off Australia and New Zealand. A single species, Hippocampus Erectus, inhabits the west coast of North America from California to Baja California.

Seahorses are masters of camouflage and can change their color to match their surroundings. Seahorses generally occur singly or in pairs. A few species often live in groups, called “pods,” of up to several hundred individuals. Many seahorse species are relatively long-lived, and some species can live for more than 30 years

Seahorses are unique tiny fish. They are best known for their horse-like heads, long snouts, and curled tails. Unlike most other fish, they swim upright and have a long, prehensile tail to anchor themselves to coral or seagrass.

Most seahorses are yellow, green, gray, or brown, but some species are brightly colored. Seahorses have thin bodies with no scales. Instead, they are covered with bony plates. They have a long snout and a small mouth surrounded by 30 to 35 tiny teeth. Seahorses have a long, snake-like tails to curl around objects and anchor themselves in place.

Most seahorses inhibit in shallow tropical and temperate waters, usually no more than 50 feet (15 meters) deep. A few species inhabit deeper waters, down to about 1,000 feet (305 meters).

Seahorses are found in all the world’s oceans, from the cold waters of the North Atlantic to the warm seas of Australia. They live in estuaries, bays, lagoons, coral reefs, and open oceans.

While most seahorses are found in tropical waters, the largest species, the big-bellied seahorse (Hippocampus abdominalis), is found in temperate waters of Australia, Japan, and New Zealand. This species can grow 14 inches (35 centimeters) long and weigh up to 2 pounds (0.9 kilograms).

Seahorses move very little, and when they do, they often move in an undulating fashion, propelling themselves using their dorsal fin. They sometimes ride currents or engage in synchronized swimming with other individuals of the same species. They often move about by holding onto the stems or leaves of aquatic plants with their tails

Seahorses are poor swimmers who rely on the currents to help them move around. To stay afloat, they must constantly pump water through their gills using a set of muscles surrounding their throats’ entrance. If a seahorse isn’t moving, it will sink.

Seahorses are very slow-moving creatures. They only swim at a speed of about 1 meter (3.3 feet) per hour. In the Guinness Book of World Records, the slowest-moving fish in the world is the dwarf seahorse (H. zosterae). When they need to move faster, they use their tails to paddle themselves along.

Seahorses Have No Stomach

Seahorses have no stomach and a very small intestine, so they must eat constantly. Their diet consists of small shrimp and other tiny crustaceans that they suck into their snouts. Seahorses feed on mysids and plankton. They capture their prey with their curved mouths, then suck the food into their stomachs.

Male and female seahorses come together and entwine their tails. The male then uses his muscular tail to guide the female’s egg-laden ovipositor into his brood pouch, where she deposits her eggs.

Seahorses have a very interesting life cycle. The males are the ones who carry the eggs until they are ready to hatch. After the female lays her eggs in the male’s pouch, he fertilizes them and then carries them for about 45 days until they are ready to hatch. He then gives birth to anywhere from 20 to 1,500 baby seahorses, depending on the species.

Seahorses are slow-moving animals with few predators. Their main predators are larger fish, such as groupers, barracudas, and dolphins. Humans also hunt seahorses for food and use them in traditional medicines.

Seahorses are not easy to keep in captivity and are considered to be endangered. This is because they are often collected for use in Traditional Chinese Medicine. The dried body of the seahorse is crushed into a powder and made into pills or tea. This powder is believed to help with various medical conditions, including impotence, joint pain, heart disease, and asthma.

They are also at risk of habitat loss and from being caught in fishing nets. Seahorses are hunted for their meat, considered a delicacy in some cultures, and for their shells, which are used in jewelry and other crafts.

Seahorses are also popular in the aquarium trade and are collected from the wild to be sold as pets. An estimated 20 million seahorses are taken from the wild each year. This harvesting harms wild populations and contributes to the decline of some seahorse species.

The Monterey Bay Aquarium in California has had the most success keeping seahorses and has been on display since 1996. The Convention on International Trade in Endangered Species of Wild Fauna and Flora (CITES) regulates the international trade in seahorses, to which more than 180 countries, including the United States, are signatories. CITES requires that trade in seahorses is limited to sustainable levels and that all seahorses be properly documented.

The seahorse is a protected animal in many cultures and is considered a symbol of good luck in some countries. In China, for example, seahorses are often given as a wedding present, as it is believed to represent fidelity and harmony.

Seahorses are amazing creatures that have fascinated humans for centuries. These unique animals play an important role in the ecosystem and are currently threatened by habitat loss and overfishing. It is important to be aware of their issues and do what we can to protect these beautiful creatures.

What more do you think needs to be done to protect these animals? Let us know in the comments!