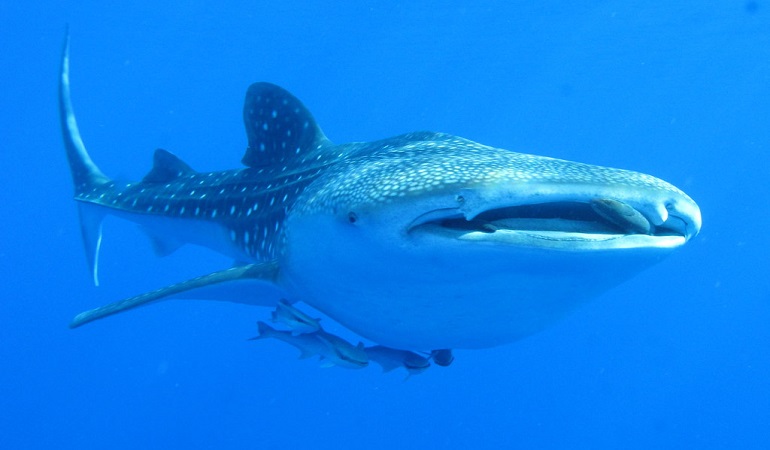 Whale sharks are the world’s largest fish, and can weigh up to 40 tons. They are peaceful giants, docile creatures that pose no threat to humans. Despite their size, they are filter feeders and mostly eat plankton. Whale sharks are found in equatorial waters around the world.

They often congregate in areas where there is an abundance of food, such as near coral reefs. During the day, whale sharks often float close to the surface, making them a popular target for tourists who want to swim with them.

However, it is important to remember that these animals are wild creatures and should be treated with respect. Swimmers should never touch or harass a whale shark. These giant creatures are found in tropical oceans.

The biggest fish now alive are sharks (Rhincodon typus). They travel great distances in search of plankton to feed on to maintain their enormous size and breed. All of the world’s tropical waters have sharks.

These gentle giants are distinctive due to their white spots, and snorkelers and divers enjoy viewing them at the locations where they congregate off the shore.

Also called strain feeding, it is a method of feeding that many animals use to obtain their food. This method involves the animal using some sort of filter to trap food particles from the water or air.

The most common type of filter feeding is done by fish, but it is also used by certain types of mammals, birds, and even insects. Many whales are filter feeders, as are some bats and certain species of birds. Filter feeding is an efficient way to obtain food, but it can also be problematic for the environment.

When too many animals use this method of feeding in one area, it can result in the depletion of food resources. This can be harmful to the animals and the ecosystem as a whole.

Scientists have witnessed whale sharks hunting with other fish species in the Ningaloo Reef in Western Australia during March and August. Whale sharks typically swim and graze alone.

Fish that are smaller try to avoid predators by gliding in a large ball for cover. While some predators might be deterred by that, the large-mouthed whale sharks simply consume the fish.

Whale sharks’ teeth are so tiny that they can only eat small shrimp, fish, fish eggs, and tiny plankton by using their gill rakers as a suction filter.

The body of a whale shark is divided into two main sections: the skull and the trunk. The dome houses the brain, eyes, and mouth. There are five large gill slits on each side of the head region, just above the pectoral fins. The trunk contains internal organs, such as the heart, lungs, and stomach.

The skin of a whale shark is thick and tough. It is covered with tiny teeth-like structures called dermal denticles. A whale shark’s mouth has over 3,000 super-small teeth arranged in more than 300 rows.

These denticles help to reduce drag as the whale shark swims through the water. The coloration of a whale shark’s skin can vary from light to dark gray. Some individuals have spots or stripes on their skin.

The average size of a mature whale shark is 18 meters (59 feet). However, some individuals can reach sizes of up to 20 meters (66 feet). Females are generally larger than males. Newborn whale sharks are about 50 centimeters (20 inches) long. Whales can live for up to 100 years.

Whale sharks are typically solitary creatures. However, they will sometimes gather with other sharks in groups of up to 100 individuals. These gatherings are usually in areas where there is an abundance of food.

When feeding, a whale shark will swim slowly through the water with its mouth open. Water and small organisms are drawn into the mouth by the whale shark’s gill rakers. The gill rakers trap the food particles, and the water is then expelled through the gills. Whales often swallow large amounts of water while feeding.

This water is stored in the stomach and later expelled through the vent at the back of the head.

When swimming, a whale shark will often make sudden turns and twists. This behavior is believed to be related to feeding. By swimming in this way, the whale shark can maximize the amount of food that it takes in.

Whales are known to migrate long distances. Some individuals have been tracked swimming from one side of the ocean to the other. It is not known why these animals migrate, but it is believed that they do so in search of food or suitable mating areas.

Little is known about the reproduction of whale sharks. These animals are thought to reach sexual maturity at around 30 years of age. Females give birth to live young. The number of offspring produced by a female whale shark can range from 2 to 300.

The average lifespan of a whale shark is 100 years. Whales are the largest fish in the world.

These delicate giants can grow to lengths of 18 meters (59 feet) and weigh up to 21 metric tons (23 short tons). Despite their size, whale sharks are harmless to humans. They are filter feeders, meaning that they strain food particles from the water.

Their diet consists mostly of plankton, but they will also eat small fish and squid. Whale sharks are found in tropical and warm temperate waters all over the world. These animals are migratory, and their movements are not well understood.

Whale sharks are often curious about humans and will approach divers and swimmers. These interactions are generally harmless, but there have been a few reports of sharks bumping into people.

When this happens, it is usually because the animal is startled or confused. There have also been a few instances of sharks becoming entangled in fishing nets. These animals are not aggressive and pose no threat to humans. In fact, many people consider swimming with a whale shark to be a once-in-a-lifetime experience.

The largest fish in the world, a whale shark must travel nearly 5,000 miles annually in order to get enough food, so this won’t be a quick voyage.

The global population of whale sharks is not well known. These animals are difficult to study due to their vast migratory range. However, it is estimated that there are only around 10,000 to 20,000 mature individuals left in the wild.

The population of sharks is thought to be declining as a result of hunting and habitat loss. Whale sharks are listed as a vulnerable species by the International Union for the Conservation of Nature (IUCN). The main threats to these animals include fishing, habitat loss, and pollution. Whale sharks are hunted in some areas for their meat, oil, and fins.

Although blue marlin and blue sharks prey on younger whales, there are no known natural predators of adult sharks.

Since they are illegally harvested and sold as food and are susceptible to harm from huge cargo vessels, humans provide the greatest threat to these endangered species.

Whale sharks can nevertheless sustain injuries when fishing boats collide with them, even though their rubbery skin can be more than five inches thick. Pollution poses a threat to the environment in the ocean as well.

However, experts hope to see a growth in the number of sharks, in part because of protected regions where it is illegal to harm whale sharks. Australia, India, the Philippines, and the United States are among these protected areas.

Despite being the third-largest animal in the water (after blue whales and fin whales), whale sharks are not violent and pose no threat to people. In fact, the sharks don’t mind at all when researchers and divers swim close next to them.

Their skin is also used to make leather products. In many parts of the world, whale sharks are considered to be a valuable source of food. However, they are also revered by some cultures as sacred animals.

As a result of these conflicting views, conservation efforts for whale sharks are often difficult to implement. Despite the challenges, there are several organizations working to protect these creatures.