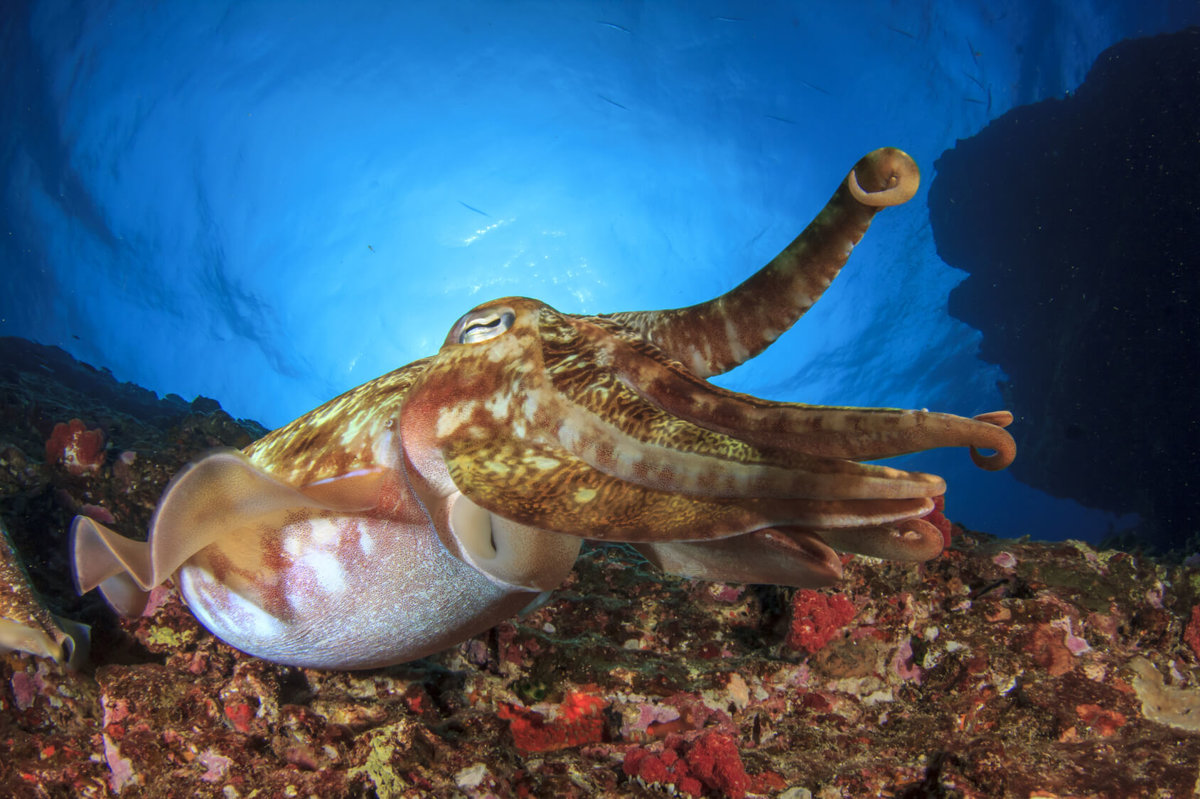 The largest invertebrate in the class Cephalopoda (which also includes octopuses, cuttlefish, and nautiluses) is Teuthida, which comprises around 300 species. Teuthida is squid’s scientific name. They are found in all the world’s oceans, from tropical to temperate waters. They are an important food source for humans and are also used in research.

For example, their ink is sometimes used as a dye, and their long tentacles can be processed into a type of rubber. They can occur in various sizes, from little ones no bigger than a pinky to the giant squid that may grow 59 feet long. It belongs to the genus architeuthis.

Small cephalopods are vampire squid in the deepest parts of temperate and tropical oceans. It’s possible that this enormous creature is what gave rise to the myth of the Kraken. However, they are not known to hunt humans or sink ships, even though the first instance of a squid-like creature assaulting prey dates back approximately 200 million years.

Among invertebrates, other cephalopods have the most advanced neural systems. They have a complex brain that takes the shape of an esophageal nerve ring and is housed inside a cartilaginous skull. They have different ranges in size, from the pygmy squid (Idiosepius spp.), which is only a few centimeters long, to the colossal squid (Mesonychoteuthis hamiltoni), which can grow to be up to 13 meters (43 ft) in length and weigh up to 750 kilograms (1,650 lb).

Most families are less than 50 centimeters (20 in) long. Squids have a cylindrical body with a mantle and a terminal mouth. The mantle is composed of muscle and protects the internal organs. The mantle also contains the chromatophores that give their coloration. The largest squid has the largest eye in the animal kingdom, around the size of a volleyball.

Squids are found in all the world’s oceans, from tropical to temperate waters. Some squid families live in shallow, coastal waters, while others live in deep-sea environments. They can be found living in both pelagic and benthic habitats. Most ones are aquatic, living in open water environments.

They inhabit a wide range of depths, from mesopelagic to abyssal zones. Glass squid spend most of their lives in shallow seawater with some sunlight, where their transparency acts camouflage.

For example, the Hawaiian bobtail squid (Euprymna scolopes) is often associated with the bacterium Vibrio fischeri. The symbiotic relationship between these creatures and the bacterium is symbiotic, with each organism benefiting from the association.

Squid inhabit diverse environments, including estuaries, lagoons, shelf seas, and oceans. They can be found at depths of up to 3,000 meters (9,800 ft). Some species of squid are found in deep watering hydrothermal vents.

Squids are active predators and use their tentacles to grab prey. There are different feeding squid patterns. Squid typically eat fish, crustaceans, mollusks, and other ones. Smaller squid species feed on plankton. Squid use their beak-like mouth to tear food into small pieces.

Scientists suggest that squids’ inability to recognize high-frequency sounds, such as a dolphin’s clicks, may explain why they are preyed upon by so many creatures.

Squids are highly intelligent creatures and have a complex nervous system. Squids can learn and remember tasks. They can also communicate with one another using a system of body language. They use their arms and tentacles to express emotions such as anger, fear, and happiness.

They are social animals and often live in groups. Some of these migrate long distances. Squids are known to engage in playful behavior and are highly intelligent creatures with complex nervous systems. They can learn and remember tasks.

The Histioteuthidae family of deep-sea squid has two different types and orientations of eyes. The huge left eye is shaped like a tube and is facing upward, likely looking for the shadows of creatures higher in the deep water column. The right eye’s natural shape directs it downward and forwards to locate prey. They propel themselves with jet propulsion.

Some species are capable of gaining the necessary speed to take flight. They take off into the air, fan out their tentacles like a sail, and soar up to 164 feet above the water’s surface. This could be done to conserve energy or avoid predators. Although they can’t fly, several of these are known as “flying squid” because of their behavior.

Squid populations are believed to be stable. However, little is known about the population dynamics of most species. They are an important food source for many animals, including fish, sharks, dolphins, and birds. Humans also harvest squid for food. It is a popular seafood dish in many cultures.

Most squids are often prepared as calamari, which are fried squid rings. Rising temperatures due to climate change have resulted in population growth in the Pacific Northwest and Alaska.

Scientists are unsure of the wider impact this could have on the environment due to the complexity of ecosystems and food webs. As a result, it is still critical that their stocks are managed properly to ensure the animal’s long-term survival.

Squid reproduce by laying eggs. The female squid deposits her eggs in a gelatinous mass, which she attaches to rocks or other substrates—the eggs hatch after a period of development ranging from a few days to several months.

Molluscan biology revolves around the female’s mantle cavity. The mantle skirt, a double fold of mantle that encloses a water space, creates this cavity. The mollusk’s gills, anus, osphradium, nephridiopores, and gonopores are located in this space. In most mollusks, the mantle cavity serves as a respiratory chamber. They typically live for one to two years. However, some kinds of squid are known to live for up to five years.

A yolk sac is found in the embryos of Sepia, Loligo, and octopus (Octopus). There is less yolk and almost no yolk in certain presumably archaic Teuthoidea. The embryo grows directly, without the distinct larval stages and metamorphoses seen in other mollusks. Their average life span in the wild is one year.

Squid can occur in various sizes, from southern pygmy squid that is the size of a pinky fingernail to giant squid which may reach as many as 59 feet long possible this enormous creature is what gave rise to the myth of the Kraken. Squid is not known to hunt humans or sink ships, even though the first instance of a squid-like creature assaulting prey dates back approximately 200 million years.

Examination revealed that the eyeballs, which were larger than footballs and may be among the large eyes ever to have existed in the natural world, were employed to identify prey in the deep Southern Ocean.

Due to their several benefits and crucial role in the ecosystem, it’s important that squid stocks are managed appropriately to ensure the animal’s long-term survival.