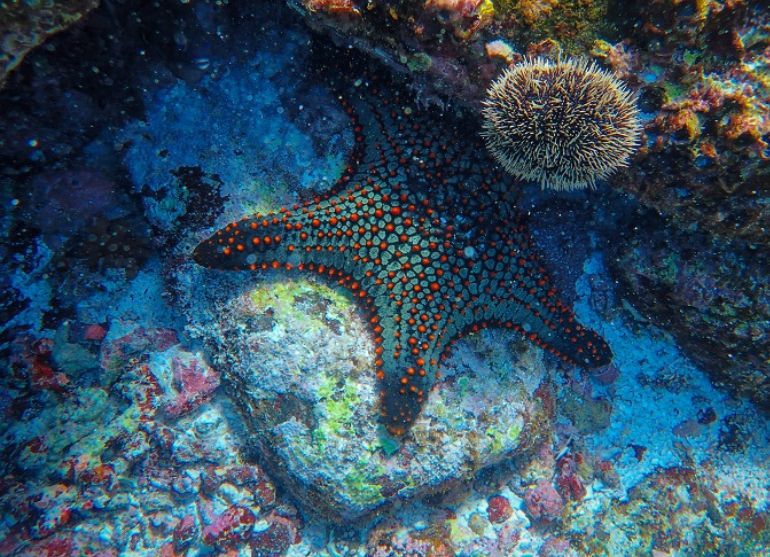 Starfish is one of the unique creatures in the ocean. Starfish are animals that live in the sea. Some people might not think of them as animals, but they are! They use five or more arms to move around and catch food. They may look delicate, but they are tough and can survive in pretty harsh conditions.

Starfish are beautiful animals, and many people enjoy looking at them. They can be in different colors, but most are orange or red. This blog post will take a closer look at these aquatic creatures and learn more about what makes them unique. Stay tuned!

Sea stars or commonly called starfish, are star-shaped echinoderms belonging to the class Asteroidea. Common usage frequently finds these names also applied to ophiuroids, which are correctly referred to as brittle stars or basket stars.

Starfish are marine invertebrates with a central disk and five or more arms extending radially from it. The anatomy and feeding habits of many species have been studied intensively by biologists. Instead of blood, sea stars’ circulatory system is mostly composed of seawater.

Starfish or sea stars live underwater in all the world’s oceans, from the tropics to Polar Regions. About 1,500 species have been described, making Asteroidea the largest class of echinoderms after the sea urchins (Echinoidea). The body plan of a typical starfish involves five articulated arms arranged around a central disc.

Most species are fixed in place using a sucker located on the underside of the disc, but some can move about by crawling. The body’s surface is covered with overlapping plates of calcium carbonate, which protect against predators and help the animal absorb oxygen from the water.

Starfish are predators, feeding on various small animals, including mollusks, crustaceans, and other echinoderms. They typically capture their prey by extendable arms lined with hundreds of tiny suction cups.

Once the prey is secure, the starfish uses enzymes to dissolve its victim’s shell before consuming the body. However, they are also prey for larger animals, such as sharks, seals, and sea birds.

When a starfish feels threatened, it has a few different ways to defend itself. One is to release a cloud of toxins from its body that can poison predators or discourage them from trying to eat the starfish. Another is to drop off its leg, which confuses the predator and allows the starfish to escape. Finally, the starfish can curl into a ball, protecting its vulnerable underside.

Starfish are not the only creatures that have interesting defensive adaptations. Many animals have evolved creative ways to avoid being eaten by predators. Some, like the starfish, use toxins or camouflage to blend in with their surroundings.

Can You Eat Starfish?

Yes, you can eat starfish. Some people consider them a delicacy. Starfish is a type of sea urchin, and their meat is similar in taste and texture to other types of seafood such as lobster or crab. If you’re interested in trying starfish, you may be able to find it for sale at some specialty seafood markets.

Starfish, or sea stars, are predatory marine invertebrates. Most species of starfish eat mollusks, such as clams and oysters. Some prey on small fish, while others scavenge for dead organisms.

Starfish have a unique digestive system that allows them to digest their food externally. They use their stomachs to push their way into their prey’s shell and then secrete digestive enzymes that liquefy the animal’s tissues. The starfish then sucks up the resulting slurry.

Most starfish are predators, but some have developed interesting methods of obtaining their food. For example, the sunflower star (Pycnopodia helianthoides) is a voracious predator that can grow to nearly three feet across. This specie preys on other starfish, using its long, tube-like legs to pry open the shell of its victim and then everting its stomach over the unfortunate creature to digest it alive.

Another unusual feeding behavior is exhibited by the crown-of-thorns starfish (Acanthaster planci). This species feeds on corals, using long spines to pry open the coral’s exoskeleton and then extruding its stomach over the coral to digest it. The crown-of-thorns starfish is a serious threat to coral reefs, as a single individual can consume up to ten square meters of living coral in a year.

The harpacticoid copepod (Tisbe batissa) is a tiny crustacean that lives in the sand beneath the waves. This creature has developed a symbiotic relationship with the starfish Pisaster ochraceus, which preys on mollusks. When the copepod senses that a predator is approaching, it grabs onto the starfish’s leg and is carried to safety. The copepod is allowed to feed on the starfish’s feces in return for this service.

Some more interesting facts are described below!

Sea Stars Are Not Fish

Despite their popular name, starfish are not fish. They are echinoderms, a group of animals that includes sea urchins, sand dollars, and sea cucumbers. Echinoderms are characterized by their five-point radial symmetry (that is, they have body parts arranged around a central point) and their tough skin, which is covered with tiny spines.

While they may not be fish, sea stars are excellent swimmers and are often found in tide pools and coral reefs. They use their tiny tube feet to move around and capture prey.

Not All Sea Stars Have Five Arms

Some sea stars have as few as two arms, while others have more than ten to forty. However, the commonality among all sea stars is that they are amazing animals that play an important role in the ocean ecosystem.

If you find a sea star that has lost arms, don’t worry – they can regrow them! This process can take months or even years, but watching them slowly grow back is amazing!

The majority of sea stars’ vital organs are housed in their arms. This implies that some species can regrow an entirely new sea star from just one arm and a portion of the star’s central disc.

Did you know that some sea stars have eyespots? These small, black spots near the end of their arms help them sense light. They don’t have actual eyes, but the eyespots help them determine which way is up so they can orient themselves properly.

Sea stars are echinoderms, a group of animals that includes starfish, sea urchins, and sea cucumbers. Echinoderms get their name from the spiny growths that cover their skin. These spines help protect them from predators and from being eaten themselves.

Echinoderms are found all over the world, in both shallow and deep water. They come in a wide variety of shapes, sizes, and colors.

Starfish are generally monogamous, meaning they mate with only one individual at a time. During mating season, typically during the summer months, male and female starfish come together and release their gametes, or sex cells, into the water. The sperm and eggs will then fuse to form larvae.

Once the larvae have formed, they will float on the ocean floor for some time before settling down on the bottom of the seafloor. At this point, they will undergo a process known as metamorphosis, during which they will develop into adult starfish. Some starfish reproduce asexually through the process of regeneration.

The lifespan of a starfish is typically between 5 and 10 years, although some species can live for up to 20 years.

Starfish are important members of many marine communities. They play an important role in controlling populations of other animals in the marine environment by eating them.

They provide shelter and food for many other organisms, and their scavenging activities help keep the seabed clean. However, they are also subject to human disturbance, particularly overfishing and pollution.

Starfish are amazing creatures that have many unique features. From their five-way symmetry to their ability to regenerate lost body parts, they are truly fascinating animals. Although humans often fear them due to their prickly exterior, they are quite harmless and can even be fun to watch as they move along the seafloor.

Starfish are not dangerous to humans and not harmful to the environment. They are a valuable part of the ocean ecosystem and play an important role in keeping the ocean clean and healthy. So next time you’re at the beach, keep an eye out for these incredible animals.