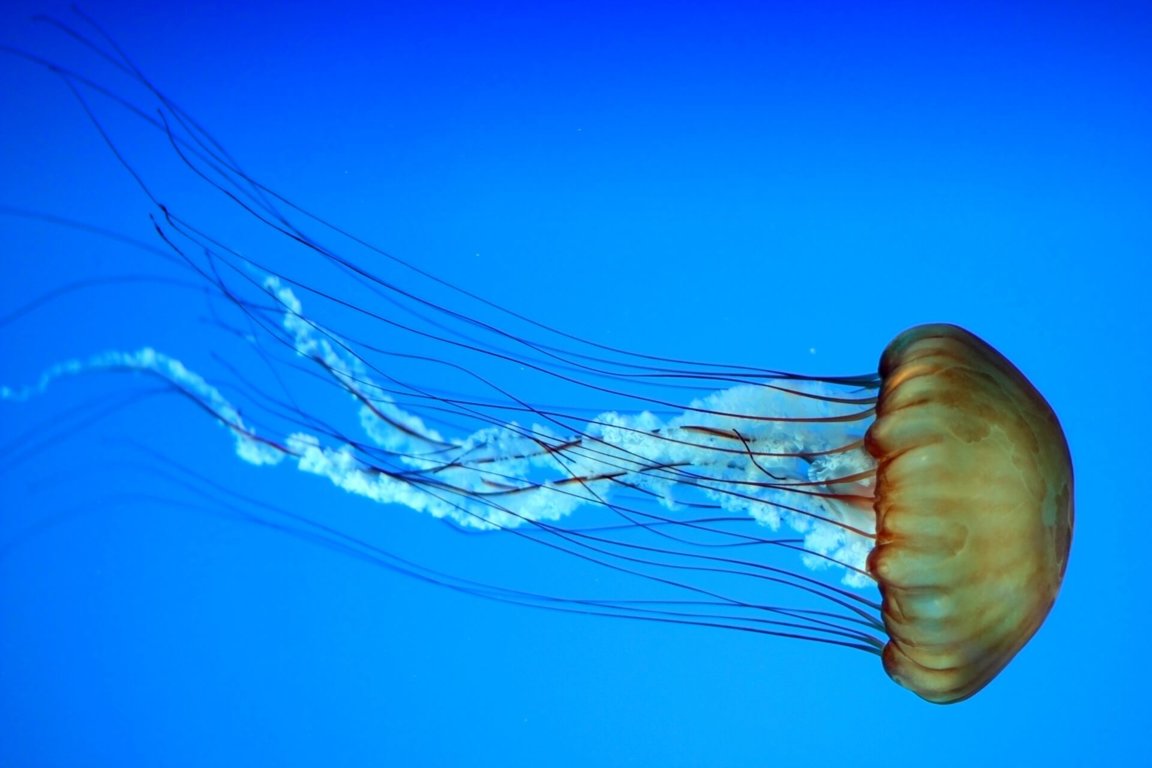 Do you know that there are over 2,000 different jellyfish species? These aquatic animals can be found in salt water and fresh water habitats worldwide. A jellyfish is known by a variety of different names, including Medusa. This is due to their round form and tentacles, which resemble those of the mythical Greek creature Medusa who was known for having snakes in place of hair.

Jellyfish have many mysterious qualities that make them unique creatures. In this blog post, we will explore some fun facts about jellyfish. Are you ready to learn more? Let’s get started!

Jellyfish go through a unique life cycle. They begin their lives as free-floating larvae and eventually grow into adults. The larvae attach themselves to surfaces and transform into polyps. These polyps (baby jellyfish) eventually produce medusa, the adult jellyfish we are familiar with.

Jellyfish Could Be Older Than Dinosaurs

Jellyfish have been around for a very long time. Some scientists believe that they may have even existed before dinosaurs. Jellyfish are thought to have evolved over 500 million years ago, which means they are older than dinosaurs!

Ancient jellyfish fossils have been discovered in Utah over 5,000 years old. The entire United States West – including Utah – was still under the Pacific Ocean.

Jellyfish are mostly water. In fact, they are about 98% water. This makes them one of the simplest animals on Earth.

Jellyfish also don’t need lungs since they can breathe through their exceptionally thin skin. Jellyfish also lack a heart because they have no blood. They don’t have brains. Instead, they have a simple network of nerves that helps them to sense their surroundings.

Jellyfish Can Glow in the Dark

Some jellyfish are bioluminescent, which means they radiate bright colors at night. This is because they have a light-producing organ called a photophore. This is intended to frighten off predators but is also quite lovely.

Jellyfish don’t have bones. Instead, their bodies are made up of a jelly-like substance called mesoglea.

Jellyfish Can Be Found in Every Ocean

Jellyfish can be found in every ocean on Earth. They are usually found near the coast, where there is plenty of food for them to eat.

Jellyfish Can Live Up to a Year Without Food

Jellyfish can travel up to 4,000 miles in search of food and live up to a year without food. Jellyfish eat plankton, small fish, and even other jellyfish.

Jellyfish Are Important to the Food Chain

Jellyfish are important to the food chain. They are a food source for sea anemones, including turtles, sharks, fish, swordfish, and penguins.

Jellyfish are not fish. They are invertebrates, which means they don’t have a backbone. Jellyfish are classified as animals. A group of jellyfish is called a bloom or swarm.

Jellyfish lack scales, gills, and fins that are common in other fish. Instead, they propel themselves by opening and shutting their “bells.”

Jellyfish Can Clone Themselves

Jellyfish can clone themselves. This means that they can produce an exact copy of themselves without needing a mate.

Jellyfish Can Have Eyes

Some species of jellyfish can have eyes. The Australian box jellyfish, sometimes known as the sea wasp, has 24 eyes, two of which are like humans’ eyes and can be seen in color. It’s also thought that this creature’s complex visual system allows it to see in 360 degrees, making it one of the few animals on earth with such a wide field of vision.

Jellyfish Has Teeth and Swims through Mouth

Jellyfish Can Live for a Long Time

Some jellyfish might be immortal. The Turritopsis nutricula is a species of jellyfish that can revert to its juvenile stage after reaching sexual maturity. This means that it can potentially live forever!

Jellyfish reproduce both sexually and asexually

Jellyfish reproduce both sexually and asexually, depending on the species. Some adult jellyfish release eggs and sperm into the water, where fertilization occurs.

Jellyfish can also reproduce asexually by producing small clones of themselves. These clones eventually develop into adult jellyfish that are identical to the original individual. As a result, jellyfish have a significant advantage in reproducing; they can produce offspring both sexually and asexually, ensuring that their species will continue to thrive.

They Eat Where They Poop

Jellyfish must excrete their food in the same location where they ingest it since if the food is still within their bodies, they can’t float.

Jellyfish eat by swallowing their prey whole. They then push the food through their body and into their stomach. Waste is then expelled through the mouth. This process is known as extrusion feeding.

Jellies Can Get As Big As Blue Whales

Jellyfish can get as big as blue whales. The largest jellyfish ever found was the Lion’s Mane Jellyfish which can reach up to the length of a Blue Whale. The biggest animal on Earth is the Blue Whale. It can grow up to 100 feet (30 meters) long and weigh over 150 tons!

They Are Among Earth’s Deadliest Creatures

You might have heard a myth that peeing on a jellyfish sting helps to relieve the discomfort. On the positive side, this information has aided Australian researchers in developing an antidote for box jellyfish stings. Unlike True jellyfish and Box jellyfish, comb jellies don’t sting.

Jellyfish Can Be Tiny or Enormous

Despite their simple anatomy, jellyfish come in all shapes and sizes. Some jellyfish can be tiny like Irukandji, while others can be enormous like Lion’s Mane Jellyfish.

The Smallest Jellyfish Is The Irukandji

The smallest jellyfish is the Irukandji. It measures just 0.39 inches (1 centimeter) in diameter and has tentacles that can reach up to 6.56 feet (2 meters) in length! It is only about 1/4 of an inch wide and weighs less than a gram.

The Largest Jellyfish Is The Lion’s Mane Jellyfish

The largest jellyfish is the Lion’s Mane Jellyfish. It can grow up to 9.8 feet (3 meters) long and has tentacles that can reach up to 98 feet (30 meters) in length! It can grow over 6 feet wide and weigh up to 440 pounds!

Some Jellyfish Are Edible

In some countries, they are considered a delicacy. Humans can consume more than 25 distinct species of jellyfish, and they are frequently eaten in countries such as China, Indonesia, Korea, Myanmar, Thailand, and the Philippines.

The Japanese have turned jellyfish into sweets, creating a sweet and salty caramel out of starch syrup, sugar, and jellyfish powder to utilize the jellyfish that frequently plague their waters. They are often consumed raw in salads, deep-fried into crispy noodles, or eaten like sushi.

They Are an Important Part of the Ocean Ecosystem

Jellyfish are an important part of the ocean ecosystem. They are predators, but some are also food for other animals. Sea turtles, for example, eat jellyfish. Jellyfish help to keep the population of other animals in check and play an important role in the food chain.

Jellyfish Are Adapting to Climate Change

The ability of jellyfish to adapt readily to heat is one of their most distinctive features. While most marine creatures struggle to survive in our warming seas, jellyfish can easily adjust to the heat and survive in hot temperatures.

Jellyfish Have Traveled Into Space!

In 1991, a jellyfish was taken to space on the Space Shuttle Discovery. NASA did this experiment to see if the jellyfish could survive without gravity in space. The jellyfish survived the journey and returned to Earth safely.

Many species of the jellyfish, including a rather large quantity of 6000 specimens, have been sent into space.

Jellyfish Can be Used As Medicine

Jellyfish are consumed as medicines in China. They’re supposed to aid with memory and cardiac issues, among other things.

Jellyfish are transparent. This means that they can be hard to see in the water.

Despite their deadly sting or ability to clone themselves, jellyfish are amazing creatures. They have been on Earth for millions of years and will probably be here long after we are gone. So, the next time you see a jellyfish, take a moment to appreciate these amazing creatures!

Jellyfish Are in Decline

Sadly, jellyfish populations are in decline all over the world. This is due to pollution, overfishing, and climate change. Jellyfish species are sensitive to the pollutants released by human activities, particularly oil spills. The chemicals are absorbed into the skin, preventing them from reproducing and reducing their life span.

We Don’t Know Much About Jellyfish

Jellyfish are one of the most mysterious creatures on Earth. Scientists still have a lot to learn about them. For example, we don’t know why they glow in the dark or how they can clone themselves.

Jellyfish are fascinating marine animals. Although jellyfish sting can be deadly, but they are also an important part of the ocean ecosystem. So, the next time you see a jellyfish, take a moment to observe these fascinating creatures after knowing these jellyfish facts!