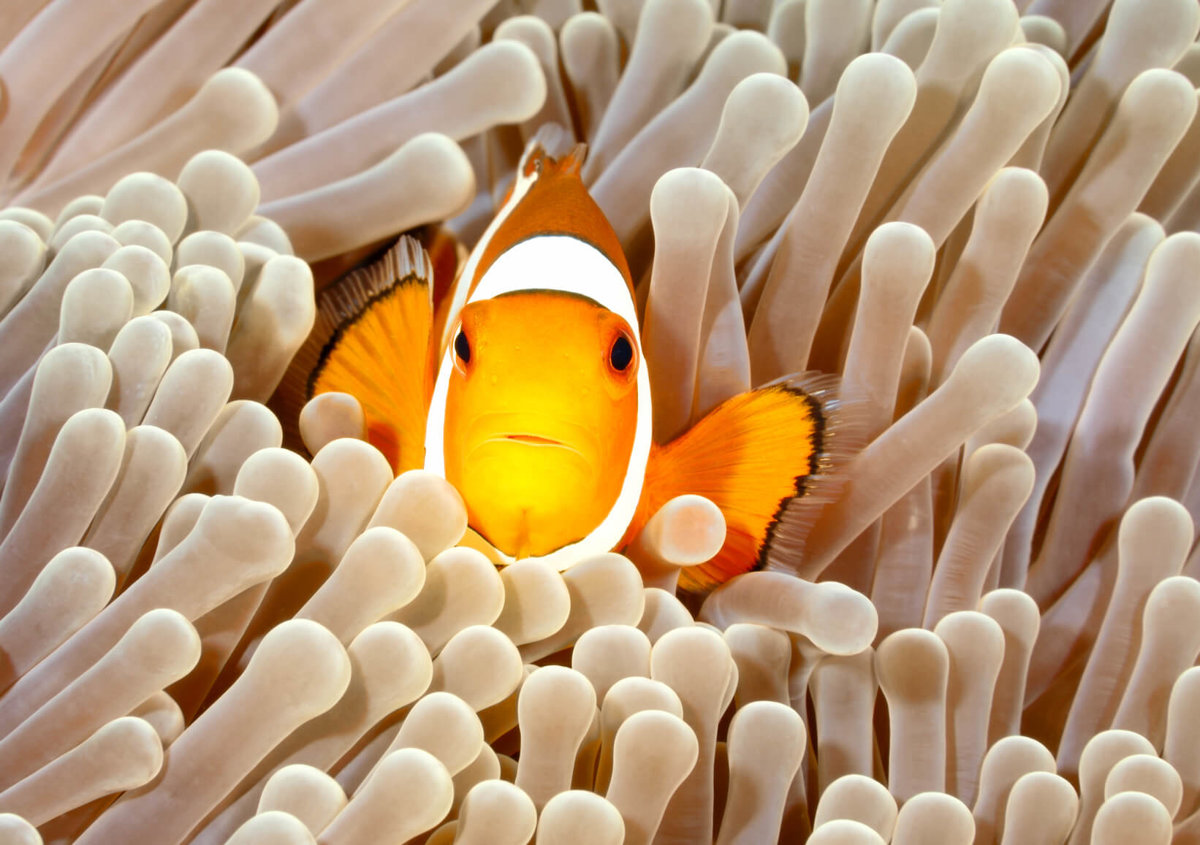 Clownfish, or Anemonefish, are fishes from the subfamily Amphiprioninae in the family Pomacentridae. Thirty species are recognized. In the wild they are known for forming symbiotic relationships with sea anemones.

The most commonly known clownfish species is orange with white markings, but clownfish are found in many different colors and can also differ in shape. Depending on species, clownfish are overall yellow, orange, or a reddish or blackish color, and many show white bars or patches. The largest can reach a length of 7.1 inches, while the smallest barely reach 3.9 inches.

Clownfish are native to warmer waters of the Indian and Pacific oceans, including the Great Barrier Reef and the Red Sea. While most species have restricted distributions, others are distributed elsewhere. Clownfish live at the bottom of shallow seas in shallow reefs or lagoons. There are no clownfish in the Atlantic.

Clownfish are omnivorous and can feed on undigested food from their host anemones. The fecal matter from the clownfish provides nutrients to the sea anemone. Clownfish primarily feed on small zooplankton, with a small portion of their diet coming from algae.

Clownfish and sea anemones have a symbiotic, mutualistic relationship, each providing a number of benefits to the other. Sea anemones are a group of water-dwelling, predatory animals. A close relative of jellyfish and coral, they are stinging polyps that attach themselves with an adhesive foot to rocks on the sea bottom, or on coral reefs. They wait for fish to pass close enough to get ensnared in their venom-filled tentacles. Clownfish are immune to the anemone's sting, protected by a mucus layer.

The sea anemone protects the clownfish from predators, and provides food through scraps left from the anemone's meals and occasional dead anemone tentacles. In return, the clownfish defends the anemone from its predators and parasites. The anemone also picks up nutrients from the clownfish's excrement, and functions as a safe nest site. The nitrogen excreted from clownfish increases the amount of algae incorporated into the tissue of their hosts, which aids the anemone in tissue growth and regeneration. The clownfish may use their bright coloring to lure small fish to the anemone, and provides greater water circulation around the sea anemone. Clownfish are the best known example of a fish that are able to live among the venomous sea anemone tentacles.

In a group of clownfish, there is a strict dominance hierarchy. The largest and most aggressive female is found at the top. Only two clownfish in a group, a male and a female, reproduce through external fertilization. Clownfish are sequential hermaphrodites, meaning that they develop into males first, and when they mature they become females. If the female clownfish is removed from the group, such as by death, one of the largest and most dominant males will become a female. The remaining males will move up a rank in the hierarchy.

Clownfish lay eggs on any flat surface close to their host anemones. They spawn around the time of the full moon. Depending on the species, clownfish can lay hundreds or thousands of eggs. The male parent guards the eggs until they hatch. In contrast to most animal species, the female only occasionally takes responsibility for the eggs. Male clownfish care for their eggs by fanning and guarding them for 6 to 10 days until they hatch. Eggs develop more rapidly in a clutch when males fan properly, suggesting that males have the ability to control the success of hatching an egg clutch by investing different amounts of time and energy towards the eggs.

The biggest threats to the survival of clownfish are pollution, the commercial fishing industry and destruction of their habitat.

Clownfish are also victims of the pet trade and animal entertainment industry, making up 43% of the global marine ornamental trade and 25% of the global trade from fish bred in captivity...accounting for decreased densities in exploited areas. Captured from their native habitat and transported to various countries to be sold as aquarium "ornamentals", the dangers, difficulties, physical and physiological needs of the animals appears to be of no concern in the lucrative pet trade and animal entertainment industry. Removed from their natural habitat they are deprived of the ability to freely engage in instinctual behaviors. Even under the best of circumstances, captivity is cruel for fish. Confined to tiny tanks, captive fish endure constant stress and boredom. With little room to exercise, they become listless, their immune systems are weakened, and they become prone to sickness; many resort to self-mutilation in reaction to stress or boredom. Mental illness is rampant among confined animals. Members of some clownfish species become aggressive in captivity. Torn from their families and deprived of all dignity, every part of their lives is controlled by their captors. Clownfish in captivity live short lives, compared to clownfish in the wild.

Anemones are even more susceptible to overexploitation due to their long lifespans, slower relative growth rates, and lower reproductive rates than their resident fish. Aquarium fishing activities significantly impact the populations of anemones and anemonefish by drastically reducing the densities of each in exploited areas. They also negatively impact anemone shrimp, and any organisms associated with sea anemones.