How Do They Test Makeup on Animals? And How to Stop Cosmetic Testing? 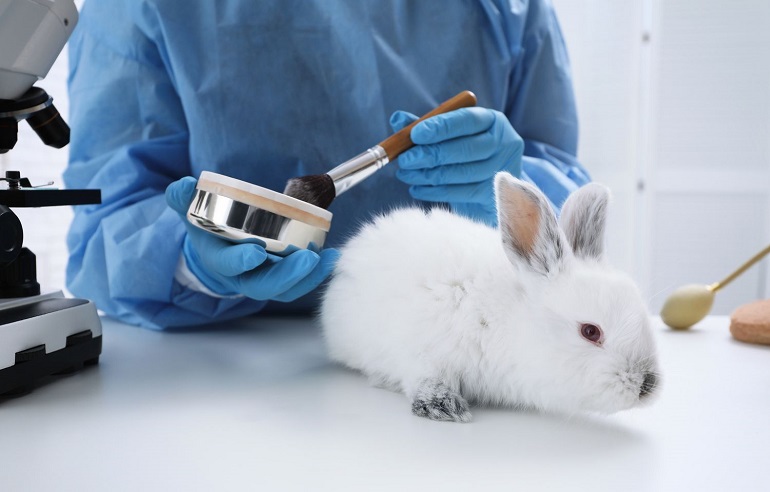 The old saying beauty comes at a price holds true in more ways than one.

Every year, millions of animals locked away in cages in research laboratories scattered throughout the world are the victims of cosmetic companies.

These animals are forced to undergo weeks, if not months, of having chemicals applied to their eyes or injected into their bodies so we can have our favorite deodorant, perfume, or skin care product.

When you think of animal testing, more often than not, good family dogs, such as beagles, spring to mind.

But in the cosmetic industry, this is very rare, for it is the animals such as guinea pigs and rabbits with the least protection that are at risk of being tested on for cosmetic purposes.

This article explores the cruel world of animal-tested cosmetics and what you, as a consumer, can do to end it.

What Products are Considered Cosmetics?

According to the Food and Drug Administration (FDA), cosmetics are defined as products intended to be applied to your body to alter your appearance, beautifying, cleansing, and promoting attractiveness.

Examples include perfumes, lipsticks, makeup preparations, hair products, tattoos, toothpaste, and deodorant, amongst many others.

Additionally, some personal care products are regulated as combined drugs and cosmetics by the FDA due to medical claims made by manufacturers.

Horrific as it is in this day and age, the practice of cosmetic product testing on animals continues unabated in countries throughout the world.

And the US and China are considered the worst proponents of animal testing.

In fact, It is estimated by Humane Society International that some 50 million animals are used in US laboratories annually for medical training and chemical, drug, food, and cosmetic testing, amongst others.

Although the animal cruelty statistics are very alarming. Unfortunately, there are no accurate statistics for cosmetic testing on animals, with many anti-cruelty organizations of the opinion that current numbers in no way reflect the true magnitude of animals being tested on in the name of beauty worldwide.

How is Makeup Tested on Animals?

For example, eye irritation tests, referred to as the Draize rabbit eye test, involves introducing chemical substances into the eyes of laboratory animals. These animals are put in restraining stocks so they can’t struggle or wipe their eyes.

The animals’ eyelids are forcibly held apart without any pain relief.

Similarly, different artificial chemical preparations (gels, perfumes, shampoos, etc.) are applied to test subjects’ shaved skin or forcibly introduced into their mouth or nose to check for the severity of the reaction on the mucus membranes.

Then you have tests that deliver cosmetic chemicals to animals through repeated force-feeding to determine specific health hazards of the ingredients, such as general illness, birth defects, or cancer.

These tests can last weeks or even months!

Lastly, you have lethal dose tests that deliberately deliver large amounts of chemicals in animal tests in order to determine the dose that causes death.

During many of these experiments and animal tests, animals are immobilized or kept in cages to observe the probability of allergic reactions and other conditions.

Without a doubt, many of these animals are no longer healthy, suffering skin lesions, hair loss, stress, and pain from prolonged contact with chemical mixtures.

In fact, animals who don’t die during the animal tests are typically killed afterward, often without any form of pain relief and by asphyxiation, decapitation, or neck breaking.

What Animals are Used in Cosmetics Testing?

Product testing on animals for cosmetic purposes typically involves the use of rabbits, guinea pigs, rats, and mice, who are purpose-bred, as disposable laboratory equipment.

While cosmetic animal testing on dogs, cats, and monkeys, although rare nowadays, still continues in the medical testing industry.

Sadly nearly 95% of the animals used in animal tests are excluded from the Animal Welfare Act (AWA), which provides for the standards of care animals should receive at research facilities.

While minimum protection, at best, is afforded by the act for the rest of the animals used in these facilities.

The term cruelty-free is unregulated and not clearly defined by law, meaning any brand can label itself as cruelty-free without legal repercussions.

These are the requirements to be certified cruelty free:

But what about vegan products?

You would think products classified as a vegan would be cruelty-free.

But vegan products, often marketed as cruelty-free products, contain ingredients such as squalene, usually obtained from shark liver and silk from silkworms.

So a word to the wise. It’s exceptionally easy for multinational companies to place a cruelty-free logo on their final product and claim they are not tested on animals.

But there still remains concern that some of their sourced ingredients from other suppliers could have been previously tested on animals.

Meaning the end product is not cruelty-free after all!

To ensure the products you purchase are truly cruelty-free, look for the Coalition for Consumer Information Cosmetics (CCIC) Leaping Bunny label on products.

This program maintains a rigorous and comprehensive standard for cruelty-free labeling where both companies and suppliers commit to no animal testing during any stage of product development.

Is Animal Testing for Cosmetics Even Necessary?

Scientific advancements have created new and more effective alternative methods where ingredient safety and efficacy can be determined without resorting to outdated animal tests.

In fact, many of the ingredients and the same chemicals used in typical cosmetic preparations have been deemed safe for human use for years, having been regularly tested with use and do not require to be tested on animals.

Experiments that show promise in laboratory animals rarely work in humans as they don’t accurately mimic how the human body responds to chemicals, treatments, or drugs

In addition, animal tests aren’t practical as it’s a lengthy and costly process that could be performed more quickly and cost-effectively using other scientific methods.

What Are The Alternatives to Animal Testing?

Currently, there are nearly 50 non-animal alternative testing methods available, with even more in the development phase.

According to People for Ethical Treatment of Animals (PETA), cruelty-free companies can make use of the following non-animal test methods.

Lined with living human cells, microfluidic devices known as organs on chips mimic the structure and function of human organs.

The chips can be used instead of animals in disease research, drug testing, and toxicity testing and have been shown to replicate human responses more accurately than animal ones.

Sophisticated computer models can simulate human biology to predict how new drugs or substances will react in the human body.

By harvesting human skin tissue and reconstructing it in a laboratory, the tissue can mimic all the characteristics of normal skin for testing cosmetics.

This is achieved through micro-dosing, where small amounts of the ingredient are introduced to the human body to measure the results of its components. and product safety

Here is a breakdown of countries and what their laws ultimately mean for animals used in such testing.

Countries that have testing on animals banned

The ban also extends to selling cosmetics tested on animals.

The FDA’s Federal Food, Drug, and Cosmetic Act prohibits the sale of adulterated or mislabeled cosmetics but does not require animal testing to demonstrate the cosmetics’ safety and efficacy.

The law only requires FDA approval for color additives before a product goes on the market.

This, in effect, means the responsibility falls to the manufacturer to substantiate the product’s safety and ingredients before marketing it.

Currently, the Humane Society of the United States is working towards passing the Humane Cosmetics Act.

And if this federal legislation is passed, it would prohibit animal testing for cosmetics and the sale of cosmetics tested on animals in the US.

China is the only country in the world where the Chinese Government requires animal testing on special-use cosmetic products.

Manufacturers of general products such as skincare, haircare, nail care, make-up, and fragrance will have the option to bypass mandatory pre-market animal testing.

Thus the onus falls on companies worldwide wishing to sell to the Chinese market to conduct such testing on their product prior to it being released in China.

Other countries, such as Australia, have a partial cosmetic ban in place with multi-use chemicals that are also used as cosmetic ingredients, such as perfumes and scents, excluded from the ban.

But perhaps more worrying of all is that some countries in Asia have yet to implement ban on animal testing or look towards non-animal test data in cosmetics.

This, coupled with increased animal cruelty laws in the rest of the world, has seen many companies outsourcing their product testing to regions with fewer checks and less public involvement.

Using animals for cosmetic testing by the cosmetics industry is a cruel and antiquated method that no longer serves a purpose.

In fact, as animal testing becomes a wider consumer concern in many countries, cosmetic companies are increasingly shifting to animal-free cruelty products.

It’s not only about illegal puppy mills or the killing of seals, horses, kangaroos, or wildlife for their skins.

It’s about the role we can all play in helping stamp out animal testing in any form worldwide.

By supporting cruelty-free cosmetics by cosmetic manufacturers and endorsed by organizations such as Cruelty-Free International or Beauty Without Cruelty, you are actively saying the sale of animal-tested cosmetics is not okay!