How Many Chickens Are Killed Each Year – The Shocking Reality! 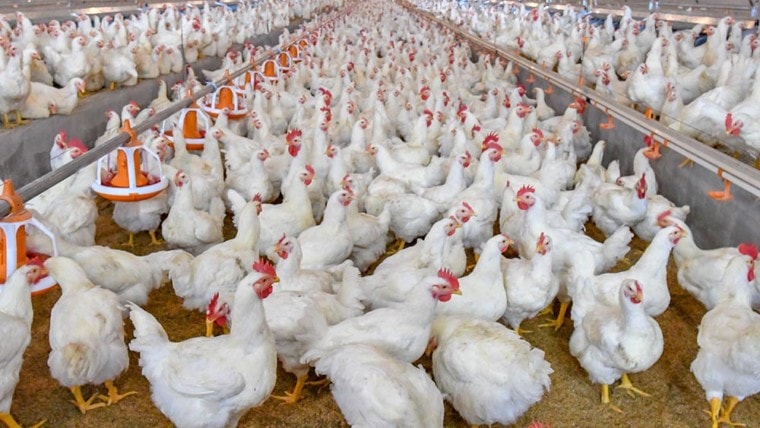 In the distant future, perhaps we’ll look back on this moment and ask ourselves, “What on Earth were we thinking?” Then, we’ll sit back with our mouths open, speechless from shock at the footage of chickens slaughtered for human consumption.

And it’s not a one-off event either. We eat and consume approximately 9 billion chickens in the USA every year. These chickens bred and slaughtered for our dinner table live for about six to twelve weeks.

Chicken has the distinguished honor of being the most consumed meat over any other land animal combined. We also cage 305 million hens that lay eggs.

Yet, despite how many chickens we slaughter each year and the importance of chickens to our dinner table, no one cares about their well-being. No single federal law gives a ‘rat’s ass’ or protects chickens from cruelty or suffering.

How Many Chickens Are Killed Each Day?

Don’t worry; you won’t have to do the math. It’s not a quiz. Here is the figure to give you a clear picture of how essential chickens are to the human population and farming.

Worldwide, there are 50 billion chickens raised and killed for food distribution. That works out to 136 million in total number consumed for meat every day. We won’t mention the ones we kill and toss into the garbage.

Chickens and turkeys account for 99% of animals killed for food in agriculture. Do you still want fries with that?

Although that death is horrific, it gets worse. Do you know what happens to male chicks at laying farms? Male chicks are a waste product. Therefore, twenty million male chicks die from suffocation or are ground up alive.

How Many Chickens are Killed Each Year in the US?

Chickens are a popular food source around the world. Americans consume 9 billion chickens every year. Chicken consumption and production have skyrocketed since the 1950s.

Although population increases have driven the demand for more chickens, it’s also about the versatility and touted benefits of lean protein for chicken meat.

Several decades ago, US consumers liked chicken too. They consumed about 580 million.

The math works out like this. In sixty years, broiler chicken consumption rose by 1400% (not a typo). The number of producers declined by 98%. Most chickens come from farms that raise 600,000 broilers per year.

Factory-farmed chickens get the endearing name broilers. These chickens arrive in warm crates on the farm, never having met their parents. There’s a pretty good chance their sisters are right next to them.

These adorable yellow chicks we like so much that we put them on our Easter cards, and decorations arrive at the farm in trucks. They leave again in trucks. They are slammed into small crates and trucked to slaughterhouses through all weather extremes. Millions sustain broken wings and legs from rough handling.

If it doesn’t die in the first few days of the stressful journey, the average chick lives for a very short time in massive chicken grow-ups.

Although some are filthy, chicken farms are regulated. They have strict quotas. Chicks usually arrive in barns that are freshly sterilized and clean. This welcoming environment has less to do with the chick’s comfort than their survival.

Most chicken broiler producers keep tens of thousands of chickens at a time. The chicks will never scratch the dirt looking for grubs or other chicken-like delicacies.

There’s no rooster to wake them in the morning, but they’re definitely well-fed. Unfortunately, as the chickens age, their barn environment starts to deteriorate with filth.

Every day some guy named “Bob’ comes along and checks their food and water dishes and removes any animal carcasses from those chickens that aren’t going to be served with fries.

The food is plentiful and enriched with nutrients to speed up the growing process. Unfortunately, some chicks become overweight from the supplements and suffer organ and heart failure.

Visiting a chicken farm stinks. The stench of maturing chickens is eyewatering. The only people who come to visit are inspectors (who knows when) and perhaps company officials because many chicken farms belong to some massive empire without a human face.

These farmers have quotas and targets, which are ridiculous and harm the chickens even more.

During its life as a broiler chicken, the animal never gets a chance to be a chicken that is loved. If there is good news, a chicken’s life of misery is short-lived.

These chickens never get to lay eggs or become hens and have chicks. Though they might cluck, they never get to explore, visit the garden, and peck the soil. Before they know it, they’re packed and shipped off.

There are many web articles about what pain chickens endure in their short life. Many writers are overcome with compassion for this animal that, when it lives in chicken factories, doesn’t even get protection under the animal umbrella. While chicken factories are cruel places, they aren’t exactly as some would have you believe.

Chicken factories are rising in popularity in the money-making business. Therefore, they provide the bare necessities in an environment that is mostly disease free. Because it has to be.

The living conditions for these chickens are horrendous. They gorge on steroid food to make them grow rapidly. Unfortunately, this enhanced diet is not healthy for the chicken, some die from their own weight.

Commercial chicken growers shouldn’t get a free pass, far from it. Chickens on these broiler farms are pitiful creatures that spend their entire lives under stress.

However, since they live in such cramped quarters, most modern farms meet the regulatory standards. A disease can spread and wipe out a farm. Today’s chicken factories are state-of-art, which makes them efficient.

There’s no argument that almost all chickens raised endure inhumane conditions depending on the farms and countries. They endure many conditions like:

To argue the case for the chicken, one has to focus the defense on the actual facts. The real facts are that chickens and their chicks form a natural bond like all mothers and their offspring when they hatch.

We deny these chicks, who start life from billions of eggs every day, the nurturing affection of their mother. These chicks don’t have access to any natural pleasures in the yard and are killed for food.

Most of the chicken consumed in America comes from farms in only 15 states. Since these mega-farms produce broiler chickens on such a massive scale, they also pollute the environment and water.

Efforts are ongoing to reform industrial animal agriculture and also protect other animals. Industrial chicken farming squeaks through since methane-producing cattle get all the news coverage.

Although the USA population more than doubled, chicken raised for consumption increased by a staggering 1400%. No wonder the weight of people in America tips the scale.

Inhumane slaughter of these birds, and cages to increase egg production, aren’t at the top of mind when millions of dollars are at stake.

Poultry farmers rule the meat industry, and goats, cows, pigs, and other livestock are slaughtered to feed the population in Asia, the US, and Europe, as well as poultry breeding. More poultry animals feed bodies than any other animals.

Poultry meat is a universal food source for millions of people in most countries. Brazil, China, and the United States are the top three countries that operate the most extensive chicken processing facilities. These three mega countries also have the most significant opportunities to reduce these poor animals’ distress.

Chicken is the most killed for food animal aside from fish. Since our world population continues to rise and consumers in countries like China move into a more affluent consumer category, it’s safe to predict that fowl and poultry consumption and demand will continue to increase dramatically.

The Animal Welfare Act nor any other federal laws protect or regulate the billions of broiler chickens or laying hens in the USA. Although cruelty laws exist in 50 states, like the Humane Slaughter Act, they exempt farmed birds and animals regardless of the degree of abuse.

Luckily, charities like the HSUS are working to change these laws that protect only the industrial farms and conglomerates that control the laws from behind the scene to grow more chickens and egg production. Many birds are killed for food; others are slaughtered as waste.

We live in a world where sometimes it’s overwhelming how cruel humans are toward animals. Below are some of the frequently asked questions.

What Is the World Chicken Population?

According to credible resources, the data shows there are an estimated 33 billion live chickens in the world.

How Many Chickens Die Each Year?

Most eating broilers only live for six to twelve weeks; all male offspring are killed shortly after birth at laying farms, and laying hens are exterminated after one year. That amounts to about 50 billion dead animals.

How Are Chickens Slaughtered?

Chicken slaughterhouses are highly advanced automated chicken-killing machines. Depending on what country, it’s predominately gas or electrocution. Electrical stunning renders the birds, which are hung on a suspended conveyor belt, unconscious.

Really, chickens don’t feel a thing, not even the fear of being crated, shipped, handled, and hung upside down 🙁

Anyone who knows how we can end the cruelty and suffering of chickens, please step forward. Chicken farming on a small scale is no longer financially profitable. Many American farms are operated under the control of large conglomerates that want eggs and meals.

Chickens are inquisitive creatures and deserve our protection.

The first step to making a difference is to stop consuming industrially raised chicken and help change the numbers. Another way is to become involved with important organizations like the HSUS to make a difference.

Monika Martyn
Monika Martyn is a nomadic minimalist and published author. Her pet portfolio includes experience with over forty cats and dogs, and she becomes their surrogate and a valued pack member. One of her proudest accomplishments is typing while petting a fur baby on her lap. She also excels at dog-speak and cat-talk and is working on mastering fish lingo. Aside from her animal advocacy, she is passionate about the environment, plastic pollution, and living with less (not including chocolate and coffee). She practices yoga and meditation faithfully. She’s experienced living abroad and believes that together people can evoke change for the better. Or at least be kind to one another despite our differences. She has an uncanny knack for remembering people’s names. She’s proud of her two Pushcart Nominations, her debut novel, and her marriage. When she’s not writing, she’s thinking about writing. Monika believes that education is the biggest gift to humanity at any age.