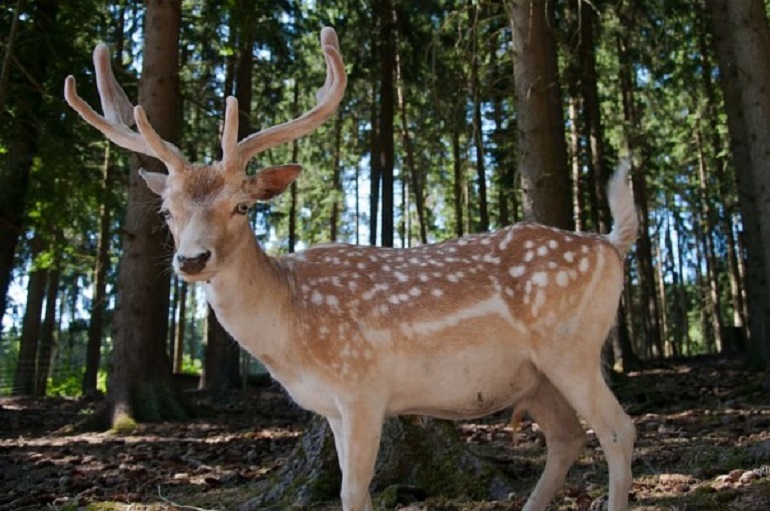 Deer are four-legged mammals that are members of the deer family, Cervidae. There are many species of deer, including white-tailed deer, mule deer, red deer, reindeer, and elk. They are found in woods and forests all over the world.

They have a good sense of smell and hearing, but their eyesight is not very good. To compensate for this, they often travel in family groups so that one deer can watch for predators while the others are eating.

Deers are preyed upon by many animals, including humans. In some parts of the world, deer are considered a nuisance because they damage crops and gardens. They are hunted for their meat and antlers in other parts of the world. The antlers are used to make souvenirs, jewelry, and other objects. They are beautiful animals, but they can also be dangerous. In this post, we’ll take a closer look at deer, their habits, and more. If you want to know about these amazing creatures, read on!

They come in many different shapes and sizes, depending on the species. They generally have four legs, a pair of large antlers on the males, and a bushy tail. Deer are hoofed mammals meaning they have an even number of toes on each foot (2-4). Most species also have a “vestigial” first toe known as a dew claw higher up on the leg and does not touch the ground when running.

Deer range in body size from the tiny Pudu, only about 12 inches (30 cm) tall at the shoulder, to the massive Moose, which can stand over 7 feet (2 meters) tall at the shoulder. The largest deer species is the Alaskan Moose, with some bulls weighing over 1,800 pounds (815 kg)! Their species also vary in color from gray to dark brown or reddish brown.

They are generally shy animals but can be aggressive if they feel threatened. Male deer will also fight each other during breeding, using their antlers as weapons. Deer are good swimmers and can even run across the water to escape predators. Some species (like the Chinese Water Deer) even have webbed toes to help them swim!

They are most active at dawn and dusk, but this can vary depending on the species and the amount of human activity in their habitat. For example, Whitetail deer living near cities may be active during the daytime since fewer humans are around to scare them.

Deer are very good jumpers and can clear fences or other obstacles that are up to 8 feet (2.4 meters) high! They use their tails to signal danger to the rest of the herd and will also stomp their feet or snort to warn off predators. When a deer is truly scared, it may even urinate on itself to try and deter the predator.

They are social animals and live in groups called herds. The size of a herd varies depending on its species and the time of year. In the winter, herds can be as small as a few deer to as large as several hundred. Herds can be much larger during the summer months when food is plentiful.

Bucks form separate herds during the breeding season. When danger threatens, they can run at speeds of up to 30 miles (48 kilometers) per hour. The males usually form their separate herds except during the breeding season. During this time, the males will compete for the chance to mate with the females. The victor of these competitions will mate with several females and father many offspring.

Importance of Deer in the Ecosystem

They are very important animals in the ecosystem. They play a role in seed dispersal and help to keep plant populations healthy by eating them. They are also prey for many predators, including humans. In some cultures, their meat is considered a delicacy, while it is an important food source in others. The antlers of some species (like the Moose) are also used in traditional medicines.

How Many Types of Deer Are There?

There are more than 40 types of deer found throughout the world. This includes red deer, reindeer, white-tailed deer, mule deer, fallow deer, and elk. Each type of deer has distinct physical features, but they all share some common characteristics, such as four legs, a bushy tail, and hooves.

The deer family Cervidae is divided into two groups, Old World Deer and New World Deer. This division evolved as a result of where they originated; however, now it’s not just based on geographical boundaries but instead on how each species’ foot structures differ from one another- with the second-hand bone (metapodia) being nearly extinct in Old world taxa while remaining intact for some species found exclusively here across North America. Even though deer are quite crowded, with representatives in all but Antarctica, few of them can be found in Africa or Australia, where humans introduced them.

The Red Deer, the world’s largest deer species, can be found in northwestern Africa’s Atlas Mountains. It is the only deer species to live in Africa.

New World deer tend to be more aggressive than their Old World counterparts and are better swimmers. Some species even have webbed toes to help them swim!

Are Deer Herbivores or Omnivores?

Deer are herbivores, which means they only eat plants. Their diet consists of leaves, grass, fruits, and nuts. When food is scarce in the winter, deer will also eat bark from trees. The deer need minerals, such as phosphate and calcium, for their healthy antler growth.

How Long Does It Take for a Deer to Grow Antlers?

It takes a few months to a year for an adult buck to grow its antlers. Male deer of all species except the Chinese water deer and female reindeer grow and shed new antlers each year. The time duration depends on the species of deer and the climate they live in. In colder climates, deer will grow their antlers later in the year to use them as insulation against the cold.

What Physical Feature Is Considered Characteristic of Deer?

Deer are characterized by their long necks, antlers, and legs. Male deer also have antlers, which they use to attract mates. Deer are ruminants with four-chambered stomachs that help them digest their food.

Males have antlers, which they use to spar with each other during the breeding season. Other deer physical features include four legs, a bushy tail, and hooves.

Ticks and Lyme Disease in Deer

Ticks and Lyme disease are serious problems in deer populations across the United States. Lyme disease is caused by a bacteria called Borrelia burgdorferi, which is transmitted to humans through the bite of an infected deer tick. Deer ticks are small and dark-colored that feed on the blood of mammals, including deer. Deer ticks are most active in the spring and summer when they are more likely to come into contact with humans.

Ticks can infect deer with Lyme disease even if they have never been exposed to the bacteria. Lyme disease can cause serious health problems in humans, including fever, headache, fatigue, and joint pain. In some cases, Lyme disease can lead to neurological problems and even death.

Males and females live in separate herds until they come together to mate in the fall mating season. After the mating season, the males return to their herds, and the females stay with their young.

Female deer give birth to one or two baby deer, called fawns, in the spring. Fawns are born with spots on their fur, which help them camouflage themselves in the forest. The spots fade as the fawn grows older.

Fawns stay with their mothers for about a year before they are old enough to be on their own. At first, they eat plants as their mother does. As they reach the hart stage (adult deer), they begin to eat meat.

Yes, they can harm humans. Deer are wild animals, and as such, they can be unpredictable. While most will avoid contact with humans, there are always exceptions. In addition, even if a deer does not directly attack a human, the animal can still cause indirect harm. For example, a deer may crash into a car, causing an accident. Some precautionary steps should be taken to prevent deer-vehicle collisions. In some cases, deer may even carry diseases that can harm humans. Therefore, it is always best to exercise caution when around these animals.

Predators of deer include humans, coyotes, wolves, mountain lions, bobcats, cougars, foxes, and bears. Deer have many natural predators, but humans are the most common predators. Humans have been hunting deer for meat and sport for centuries, and today deer are still one of the most popular animals to hunt. In North America alone, over six million hunters spend billions of dollars on deer hunting every year. Sometimes, people let dogs chase deer for hunting purposes in populated areas, resulting in accidents.

Deer are also susceptible to various diseases that can be passed on to humans, so it is important to exercise caution when around these animals.

Deer are beautiful creatures that humans often admire. However, it is important to remember that deer is a wild animal and should be treated with caution. If you encounter a deer, do not approach the animal and always give it space. By following these simple tips, you can help ensure your safety as well as the safety of the deer.