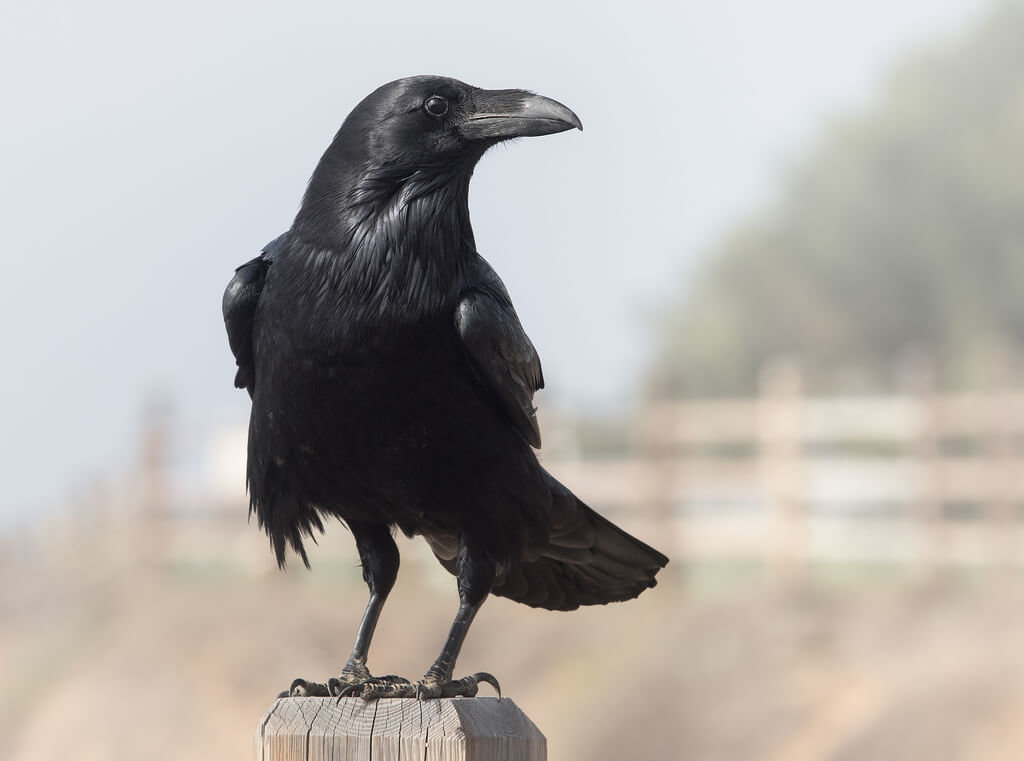 Ravens are members of a family of birds known as the Corvidae, which also includes crows, jays, and magpies. Ravens live throughout the Northern Hemisphere in a variety of of habitats, preferring forested areas near open terrain. They have wedge-shaped tails, stout bills, shaggy throat feathers, average 25 inches in length and weigh about 2.6 pounds. They can be very long lived, up to 40 years.

Ravens commonly form loose flocks by day, and at night they congregate for roosting. They are large passerine (or perching) birds. Breeding birds commonly relocate their nesting area each year. With the exception of breeding season, they travel 30 to 40 miles each day while feeding. They do not usually make long migrations like some birds.

Ravens are omnivorous, consuming both plants and animals including grains, fruit, amphibians, reptiles, fish, small invertebrates, small mammals and birds. Notorious for being scavengers, they commonly scavenge at garbage dumps. Ravens hide food supplies, and will raid other ravens’ caches. They attempt to disguise their own caches and create fake caches to fool other ravens. They play dead beside animal carcasses to scare other animals away. Ravens are also known for tricking other animals out of their food - one raven will distract the animal while the other raven steals the food. Ravens regurgitate undigestible food in the form of pellets.

Exceptional fliers, ravens engage in aerial acrobatics and may soar to great heights. They alternate between wing flapping and gliding and are incredibly fast despite seemingly slow wing beats.

Ravens are incredibly intelligent. They easily learn by watching. Ravens use logic to solve problems. They recognize different individuals, including humans. They are also very playful, carrying items aloft, trading them with other ravens in flight, and dropping and retrieving them in the air. They collect items they find interesting. Many ravens like to slide down snow and rooftops. They use tree bark or other items as sleds. Ravens not only play with other ravens, but also with other animals. Ravens even make their own toys with objects they find.

Ravens roll around in anthills to get the ants to swarm on them, or chew ants up to rub their guts on their feathers. The ants are intoxicating and may act as an insecticide, a fungicide and a soothing agent for molting skin.

Raven have a complex language. They produce a huge variety of sounds including whistles, high-pitched cries, mews, “glooks,” and even dripping water sounds. Their deep, resonant “kaw” or “prruk prruk prruk” is their trademark. They can easily mimic the sounds of other animals. Within their own groups, they have their own dialects. Ravens also use sophisticated nonvocal gestures to communicate. They point with their beaks and hold up objects to get other birds attention.

Ravens sometimes imitate other animals to attract them to carcasses they cannot break open. Some ravens work with wolves and bears to find prey, and while the wolves and bears are preoccupied with their kill ravens will alert them to potential dangers.

Ravens show empathy. When a raven’s friend loses a fight, he will console the losing bird with beak-to-body touching, sitting close to the victim, and preening. They respond in a friendly way to animals they like, and respond in a negative way to those they dislike.

Ravens mate for life, reaching sexual maturity at about 3 or 4 years of age. Mated pairs live in a fixed territory. Their courtship rituals take place in mid-January. During courtship flights, ravens fly around with their wingtips touching, repeatedly diving and tumbling together and engaging in elaborate dances of chase, dives, and rolls. By mid-March mating pairs begin roosting near their nesting areas. Females lay 3 to 7 eggs and incubates the eggs herself while the male provides food. Chicks hatch in around three weeks. They are altricial; blind, featherless and helpless. Both parents feed them by regurgitating food and water stored in their throat pouches. Baby ravens grow fast. In just four weeks they are ready to leave the nest. They remain with their parents after fledging. When raven children reach adolescence, they leave home and join gangs. The young birds live and eat together until they mate and pair off.

In some parts of the world raven populations are in decline due to animal agriculture, habitat loss, pollution, pesticides and changes in climate.

Ravens are often considered pests, but they are an important part of the ecosystem. Ravens help clean up dead animals, control insect populations, clean up garbage, and their nests are used by many other animals.