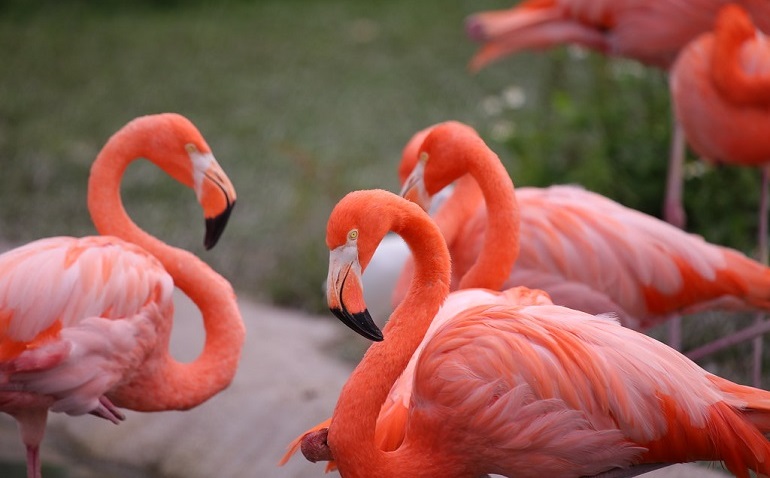 Flamingos are a type of wading bird in the family Phoenicopteridae, the only family in the order Phoenicopteriformes. Flamingos typically live in large settlements near lakes, swamps, or other bodies of water. A typical flamingo can live for 20–30 years in the wild and 50 years in captivity.

Flamingos often stand on one leg while the other is tucked beneath their body. The reason for this behavior is not fully understood. They are popular animals and are often kept in zoos, parks, and aviaries.

Because of their striking appearance, they have also been featured in art and literature. Flamingos are found in both the New and Old World, but the more prominent flamingos are the only species that occur in the Americas.

Many people associate this bird with flamboyant zoo animals or plastic yard decorations. But there are a lot of fascinating secrets related to these gorgeous birds. These stunning birds, where they go, and how they are doing.

They are able to stand alone for extended periods of time, even long enough to doze off. Standing on one leg might be more comfortable since, according to research, they exert more muscle strength when they stand on two legs.

Additionally, according to scientists, standing on one leg may keep them warm. Birds’ limbs are how they lose bodily heat. They may reduce the amount of heat loss through their legs and feet by standing on one leg and tucking the other under their belly.

The four extant flamingo species are:

Less than 40,000 Andean flamingos make up the rarest of the six species. Southern Asia and parts of Africa are home to smaller flamingos. They are the most numerous and the smallest flamingos.

More than 2 million lesser flamingos are illuminating the skies and beaches with their pink feathers. Along with Caribbean flamingos, other flamingo species include lesser, larger, Chilean, Andean James’s, or Puna flamingos.

Certain regions of Africa, Asia, and Europe are home to larger flamingos. They are the biggest and tallest type of flamingo.

Flamingos are tall, pink-wading birds with long necks and legs. They have webbed feet and a bill that is curved downward. Flamingos range in height from 3 to 5 feet (0.9 to 1.5 meters). The greater flamingos are the tallest of the four flamingo species, reaching up to 5.6 feet (1.7 meters).

The color of a flamingo’s feathers comes from the beta-carotene in the algae and shrimp that they eat. Flamingos are born white and only develop their pink coloration as they mature.

Flamingos are social birds that live in large colonies. They will build their nests close to each other so that they can protect their young from predators. Flamingos typically lay one or two eggs at a time. They are generally peaceful birds, but they can be aggressive towards each other when competing for nutritional mates.

Flamingos have been known to attack humans when feeling scared. They are interesting creatures that have unique physical features and behaviors. If you’re ever lucky enough to see a flock of flamingos in the wild, it’s sure to be a memorable experience!

Flamingos are found in warm, wet environments. Flamingos typically live near lakes, swamps, and other bodies of water. Flamingos will also inhabit salt flats and lagoons. Flamingos generally prefer areas with shallow water so that they can easily find food.

Flamingo territories can range in size from a few birds to hundreds of thousands of birds. The largest flamingo colony is located in Kenya and contains over 1.5 million flamingos! Flamingos are found on every continent except Antarctica.

Flamingos get the beta-carotene that gives their feathers their pink coloration from the blue-green algae and shrimp that they eat. If a flamingo does not get enough beta-carotene in its diet, its feathers will begin to turn white.

To prevent the fading of their plumage, food coloring is often added to the diet of flamingos maintained in zoos.

Flamingos will consume up to 4 pounds (1.8 kilograms) of food per day. They will often preen their bright pink feathers with their bills to ensure that they are properly groomed.

They use their flippy feet to mix up organic materials as they trudge through the shallows in search of food. They consume a variety of foods, such as diatoms, blue-green algae, algae, and invertebrates like tiny mollusks and crustaceans.

With the help of tiny comb-like structures inside the bill, food is strained from the murky water as the head swings from side to side.

Flamingos are social birds that live in large territories. A flamingo will build his nests close to each other so that he can protect his young from predators. Flamingos typically lay one or two eggs at a time. The incubation period for flamingo eggs is 27 to 31 days.

The flamingo chicks are born with gray feathers and will not develop their pink coloration until they are around 6 months old. Flamingos reach sexual maturity at around 3 to 5 years of age. They have a lifespan of 20 to 30 years in the wild.

The nest of a flamingo resembles a small mud volcano and has space for one big egg. Mom and dad play well together and they are monogamous. Both participate in nest construction and egg incubation.

A flamingo chick emerges from the egg with straight bills and white-gray, downy feathers. It takes them several years to develop their distinctive pink hue and hook-shaped currency.

They have a few natural predators, including birds of prey, such as eagles and hawks. Flamingos are also sometimes hunted by humans for their meat and feathers. The biggest threat to flamingos is the loss of habitat due to wetland drainage and pollution.

They are also at risk of being caught in fishing nets and being hunted by humans. Three of the four species of flamingo found in the Americas are declining quickly. The IUCN Red List rates the Puna and Chilean flamingos as near threatened while classifying the Andean flamingo as Vulnerable. Due to coastal development and mining, these birds’ habitats are being destroyed and lost.

Oil spills, various forms of pollution, collisions with powerlines installed close to foraging or nesting areas, and other hazards are all dangers that they must deal with. In the Caribbean, American flamingos and their environment are also threatened by hurricanes that are caused by climate change, sea level rise, and other factors.

Flamingos are listed as the least concern on the IUCN Red List. Flamingos are protected under the Ramsar Convention on Wetlands and the African-Eurasian Migratory Waterbird Agreement.

There are several conservation efforts underway to protect flamingos and their habitat. These efforts include creating protected areas, such as national parks and reserves, and cleaning up polluted wetlands.

You can help flamingos by supporting conservation efforts and by not buying products made from Flamingo feathers or meat. Flamingos are extremely friendly songbirds. Hundreds-strong flocks can be observed strolling in groups along the shore and flying in long, curved patterns.

During the breeding season, over a million lesser flamingos congregate on some of East Africa’s big lakes. Flamingos make an impressive and lovely image as they are flying, with their legs and neck stretched out straight and resembling white and rose crosses with black arms.

The flock at repose, with their long necks curled or coiling around the body in every imaginable manner, is just as fascinating. It’s common to observe flamingos standing on one leg. Numerous explanations for this behavior have been put forth, including energy conservation, body temperature regulation, or simple leg drying.

Observe a flamingo flight, which gives you an incredible view. Flamingos are beautiful birds that play an important role in their ecosystem. These fascinating creatures are worth protecting!

We hope this article has helped you out in knowing more about flamingos. Keep visiting to get more information and fun facts.