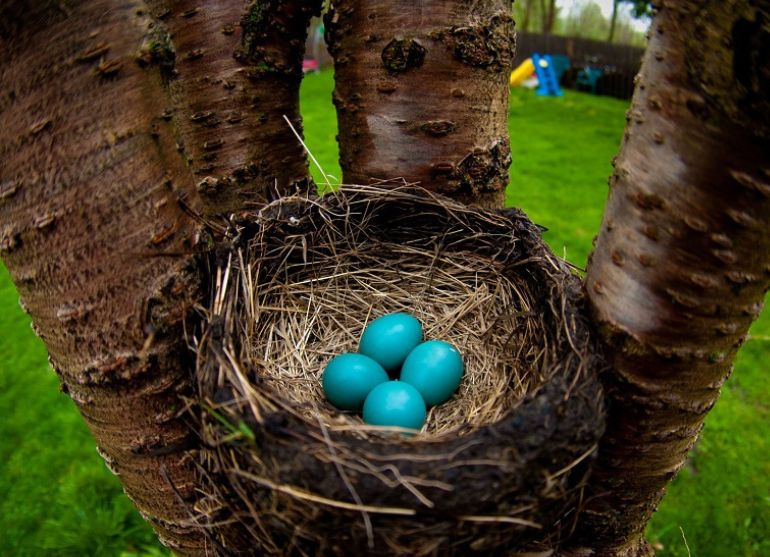 The world is full of surprises, you will realize this fact when you get to witness a blue egg. Yes, a blue egg. You must be wondering what kind of a special bird must it be that lays blue eggs. It is not just one bird, but several species of birds that are capable of laying blue eggs.

Birds that are known to lay blue eggs are Dunnocks, House Finches, Red-Winged blackbirds, Robins, and Black Tinamous. If you find the blue speckled eggs then keep a watch over the bird’s nest until the rare parent birds return home.

To learn more about these special species, read ahead to know about the amazing facts of these young birds.

The main features of some of these birds are discussed below to add to your information.

Residing in urban and suburban areas, these beautiful blue-colored Blue Jays lay eggs in a variety of colors, and blue is among those colors. A Blue Jay sometimes may also lay white eggs or even bluish green-colored eggs. But, they mostly lay blue eggs.

These birds reside in forests nearby urban and suburban areas. They will not be found in the deeper regions of the forest but on the outskirts of these forests.

They have bright blue colors on their tops with white bellies. So, identifying this beautiful species will require no time. They even have black outlines that further assist in locating them.

Blue Jays nest in coniferous trees and pines, or the branches that connect to the tree trunk. Both female and male build their nests together.

These beauties possess melodious voices and you will hear their beautiful songs in the early mornings. They eat earthworms and will mostly be found hunting for worms in your yards.

Once they locate a worm around the ground, they quickly dip their heads in the ground and pull the worm out and eat it. They love to eat fruits like honeysuckle berries during winter.

American Robins have an 0range chest and stomach with grey wings that sometimes seem black. Their orange color makes them easy to distinguish. Robins tend to roost in trees, this way they stay safe from predators.

Both the males and females Robins have distinct roosting habits. These roosters are usually very huge to even allow room for a quarter-million birds.

The Starling bird prefers to nest in amenities like man-made stoves or exhaust fans, where they lay their blue eggs. The Starling birds are inhabitants of colonies based in Asia, Europe, and Africa and tend to stay in large flocks.

They love company and stay together in large families of as many as a million members.

These birds are known to invade other areas except for the ones mentioned above owing to being an invasive species, these birds are not protected by the Migratory Bird Treaty Act, like most native birds.

Furthermore, they are aggressive in nature and tend to scare away other native birds by attacking them and their eggs.

Starlings lay around 3-5 pale blue eggs which are attractive, glossy, and smooth. The starling’s species are of different types, each having distinct characteristics including the Common Myna, European Starling, and the North American starling species.

Common Myna is also called “Indian Myna” and mostly resides in Asia. These birds adapt to new conditions easily and have a dark brown body with blackheads.

On their face, they have two bright yellow patches. The colors of their eggs are either blue/turquoise or bluish-green.

As the name implies, these are inhabitants of Europe. They are black-colored birds with markings of purple and green all over their black feathers. They also lay 4-5 eggs that are usually pale blue or green in color.

Red-winged blackbirds, as the name implies, are black-colored bird species having red wings with yellow outlines. They breed in wet and swampy zones, with the male member having multiple mates. They nest in rod-shaped cattails or bulrushes.

They live in territories and efficiently defend their nests from predators like dogs, and also humans.

They usually lay 3-4 pale bluish-green eggs with a spray of brown, black, or purple marks. The laid eggs take 10-12 days in hatching.

Dunnock birds are usually shy, quiet, and least bothersome birds and are small in size. These small birds have brown and gray bodies and reside around bushes and flowering beds.

Their homelands are Lebanon, Turkey, and Northern Iran. They are most commonly found all over Europe, in addition to the countries mentioned above.

The female Dunnock birds lay blue eggs between April and July and usually lay from three to five blue eggs.

Dunnock birds are very small like a robin but sometimes even smaller than them. They have brown bodies with gray heads with black spots on their feathers.

They have smaller beaks and they usually eat small insects. They love worms and hunt for worms and other insects just like Blue jays. They also love to eat grains and seeds that seamlessly fit their small beaks.

Dunnock nest in hedges and other shrubby areas, to feel at home. They love dense regions as they are very shy to reside in crowds.

A Blue-footed booby is a marine bird and is native to tropical and subtropical regions of the eastern Pacific Ocean. These seabirds are less than 3-ft tall and they have around five feet wingspan.

These birds have long necks with pointed brown wings. Blue-footed boobies are easy to recognize by their unique bright blue feet, which the males flaunt to sexually attract their female partners.

The female bird lays 2-3 pale blue or green eggs on the ground and the eggs hatch in 45 days. When the eggs begin to hatch, the parents put the eggs on top of their feet.

The male is responsible for bringing food to the nest for females and newly born babies. The feed usually consists of fish that these babies love to have.

These birds that lay blue-colored bird eggs are unique for their size and their location and they are beautiful with amazing responsibility and behavioral traits.

The great tinamous are small turkey-like birds renowned for laying colorful and glossy eggs. Natives of Central and South America, are large species of tinamou having an approximate length of 38 to 46 cm with weight ranging from 2.1-2.4 pounds.

These unique animals are now rarely seen owing to being haunted by neighboring humans to consume for food. They were wiped out from most areas due to selfishness of humans.

The great tinamous lay the fanciest colored eggs in the bird world with each egg giving off smooth and shiny multi-colors that change depending on the angle of sight.

Their mating season lasts from mid-winter and the female typically lays around four eggs at a time. Afterwards, the male bird incubates these eggs for 3 weeks until they hatch. Meanwhile, the female member continues to lay clutches with multiple mates.

What Is the Difference Between Blue Eggs and Regular Colored Bird Eggs?

Birds lay eggs of different colors and the most known colors are brown eggs and white eggs. However, there are more unique blue-colored eggs which are laid by distinct species of birds.

Usually, these unique birds like robins lay blue eggs because of the presence of the bile pigment biliverdin that gives blue tones in these birds’ eggs. These pigments deposit during the formation of the shell in the shell gland. This shell is usually formed right before the egg is laid.

The concentration of the bile pigment decides the darkness and lightness of the egg’s color. The higher concentration will result in darker blue egg and vice versa for the lighter shade.

Mostly, the smaller eggs laid before are subject to a higher concentration of this pigment and the eggs laid later turn bluish-green. The pigment best helps in protecting the eggs from intense sunlight.

This feature is not required in regions where sunlight is not intense. Hence, the difference between white and blue eggs.

People tend to buy unique colored eggs more believing that these distinct blue, or green colored eggs are healthier than the traditional white and brown eggs. The idea is altogether a myth for there is no difference in the nutritional makeup of different colored eggs from a single species of bird.

How Do the Colors Protect the Eggs From the Sun?

The colors of the egg protect it from harmful sunlight and prevent them from being damaged by the harmful radiation and heat emitted by the sun. If the sunlight is not barred, then the intensity will end up killing the unhatched chick.

Therefore, in the regions where sunlight is more intense, the blue coloration of the egg will be darker to keep the egg safe from the stressful intense sun radiations. The same is reversed for birds residing in places where sunlight is less intense.

Blue-colored eggs have forever mesmerized their viewers for being unique and beautiful. Only special types of birds residing in regions having intense sunlight are capable of laying blue eggs.

The blue color of these eggs helps protect the egg content from being impacted by the intensely harmful ultraviolet radiations.

These eggs are beautiful to look at and some bird species lay eggs having variable shades of blue color that change according to your angle of view.

Scientists are still researching these eggs and the potential health benefit these egg types have. The blue eggs are famous and people prefer to get these eggs more than the white and brown ones. These eggs have forever grasped the attention of people owing to their beauty.

Hope you enjoyed reading this article!