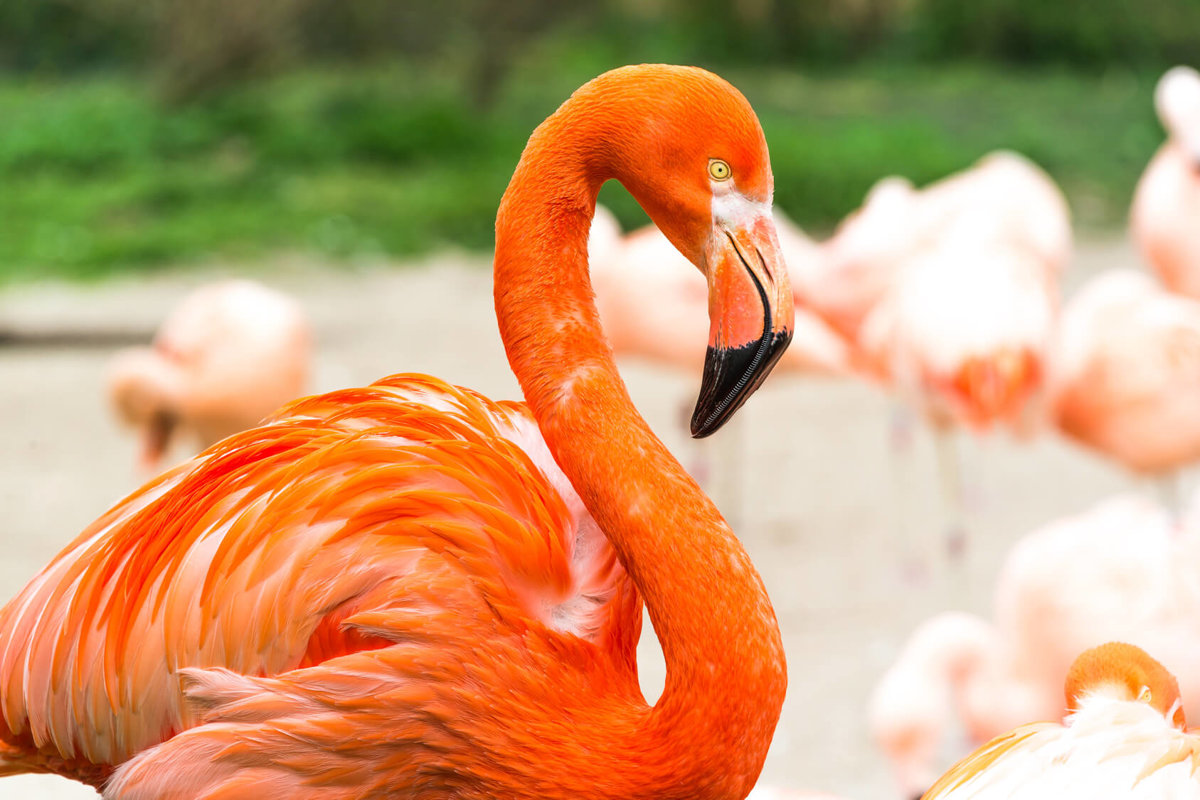 Flamingos are gregarious wading birds, usually 3–5 feet in height living in large flocks around aquatic areas. The bird is found in both the Western and Eastern Hemispheres and is more numerous in the latter. There are four species in the Americas, while two exist in the Old World.

Flamingos filter-feed on shellfish and algae. Their oddly-shaped beaks are specially adapted to separate mud and silt from the food they consume, and are uniquely used upside-down. The filtering of food items is assisted by hairy structures called lamellae which line the mandibles, and the large rough-surfaced tongue. Flamingos are also noted for balancing themselves on one leg while standing and feeding. Flamingos also stand on one leg when sleeping.

The young hatch with white plumage, but the feathers of a flamingo in adulthood range from light pink to bright red, due to carotenoids obtained from their food supply. A flamingo that is well fed and healthy is vibrantly colored. The pinker a flamingo is, the more desirable it is as a mate. A white or pale flamingo, however, is usually unhealthy or suffering from a lack of food. All flamingos have 12 black flight feathers in each wing.

Flamingos produce a “milk” like pigeon milk due to the action of a hormone called prolactin. It contains more fat and less protein than the latter does, and it is produced in glands lining the whole of the upper digestive tract, not just the crop. Both parents nurse their chick, and young flamingos feed on this milk, which also contains red and white blood cells, for about two months until their bills are developed enough to filter feed.

Flamingos are known to stand on one leg while sleeping. This is done in order to minimize body heat escaping into the water in which their feet are submerged.

Flamingos were native to Australia 20 million years ago.

The Chilean flamingo (Phoenicopterus chilensis) is a large species closely related to Caribbean flamingo and greater flamingo. It occurs in temperate South America. Like all flamingos, it lays a single chalky white egg on a mud mound. The plumage is pinker than the slightly larger greater flamingo, but less so than Caribbean flamingo. It can be differentiated from these species by its grayish legs with pink "knees", and also by the larger amount of black on the bill (more than half).

The lesser flamingo (Phoenicopterus minor) is a species in the flamingo family of birds which occurs in Africa (principally in the Great Rift Valley), across to northwest India. It is the smallest and most numerous flamingo, probably numbering up to a million individual birds. Like all flamingos, it lays a single chalky white egg on a mud mound. Most of the plumage is pinkish white. Its clearest difference from greater flamingo, the only other Old World species, is the much more extensive black on the bill. Size is less helpful unless the species are together, since the sexes of each species are also different in height. This species feeds exclusively on the alga spirulina plantensis, which occurs only in very alkaline lakes. Their deep bill is specialized for tiny food items. The population in the two key east African lakes, Nakuru and Bogoria, have been adversely affected in recent years by suspected heavy metal poisoning.

The James's flamingo (Phoenicopterus jamesi), also known as the Puna flamingo, is a South American flamingo. It breeds on the high Andean plateaus of Peru, Chile, Bolivia and Argentina. It is related to the Chilean flamingo and the Andean flamingo. It is a small and delicate flamingo, approximately 3 feet in height. Its plumage is pale pink, with bright carmine streaks around the neck and on the back. When perched, a small amount of black can be seen in the wings. There is bright red skin around the eye. The legs are brick-red and the bill is bright yellow with a black tip. Immature birds are grayish. James's flamingo is similar to other South American flamingoes, but the Chilean flamingo is pinker, with a paler and longer bill, and the Andean flamingo is larger with more black in the wings and bill, and yellow legs.

The Andean flamingo (Phoenicopterus andinus) is a bird species in the Flamingo family restricted to the Chilean Andes. It is closely related to James's flamingo. Like all flamingos it lays a single chalky white egg on a mud mound. Its population in Northern Chile was badly hit by drought, which cause the breeding lagoon areas to dry up, either preventing nest building, or allowing predation especially from the Culpeo Fox. Andean flamingos, like all the group, feed by filtering small items from water with their specialized bills. They have a deep, narrow lower mandible, which allows them to eat small foods such as diatoms, in contrast to the wider bill of larger species, which take bigger prey items. Most of the plumage is pinkish white. The Andean flamingo is the only species that has yellow legs and feet.

The Greater flamingo (Phoenicopterus roseus) is the most widespread species of the Flamingo family. It is found in parts of Africa, southwest Asia (including Turkey), southern Asia (coastal regions of India) and southern Europe (including Spain, Portugal, and the Camargue region of France). Some populations are short distance migrants. This is a large species and is closely related to the Caribbean flamingo and Chilean flamingo. Like all flamingos, this species lays a single chalky-white egg on a mud mound. Most of the plumage is pinkish-white, but the wing coverts are red and the primary and secondary flight feathers are black. The bill is pink with a restricted black tip, and the legs are entirely pink. The call is a goose-like honking.

The Caribbean flamingo (Phoenicopterus ruber) is a large species of flamingo closely related to the greater flamingo and Chilean flamingo. It breeds in the Galapagos Islands, coastal Colombia and Venezuela and nearby islands, the Yucatán Peninsula of Mexico, and in the northern Caribbean in the Bahamas, Hispaniola, Cuba and Turks and Caicos. Most sightings in southern Florida are usually considered to be escapees, although at least one bird banded as a chick in the Yucatán Peninsula has been sighted in Everglades National Park, and others may be genuine wanderers from Cuba. The habitat is similar to that of its relatives, including saline lagoons, mudflats and shallow brackish coastal or inland lakes. Like all flamingos, it lays a single chalky white egg on a mud mound. Most of the plumage is pink, giving rise to its earlier name of rosy flamingo and differentiating adults from the much paler European species. The wing coverts are red, and the primary and secondary flight feathers are black. It is the only flamingo which naturally occurs in North America. The bill is pink with a restricted black tip, and the legs are entirely pink. The call is a goose-like honking.

The primary threats to flamingos are habitat loss, bacterias, toxins and pollution from manufacturing companies. Spread of diseases is a major threat due to flamingos living in such large colonies. Changes in climate can affect the natural habitats of flamingos, as droughts dry up their habitats. Their desire to mate is lessened by temperature extremes. Poaching is also a threat to flamingos, as the birds are killed for their decorative feathers and eggs. Their tongues are harvested for meat.

Flamingos are also common victims of the animal entertainment industry. Removed from their natural habitat, denied the ability to engage in their instinctual behaviors, flamingos are placed on display at zoos, hotels and other businesses for the amusement of humans. Even under the best of circumstances, captivity is cruel for wild animals. Confined to tiny areas and gawked at by crowds, animals in exhibits and acts endure constant stress. They may suffer from temperature extremes and irregular feeding and watering. Without exercise, they become listless, their immune systems are weakened, and they become prone to sickness; many resort to self-mutilation in reaction to stress or boredom. Mental illness is rampant among confined animals. Torn from their families and deprived of all dignity, every part of their lives is controlled by their captors.