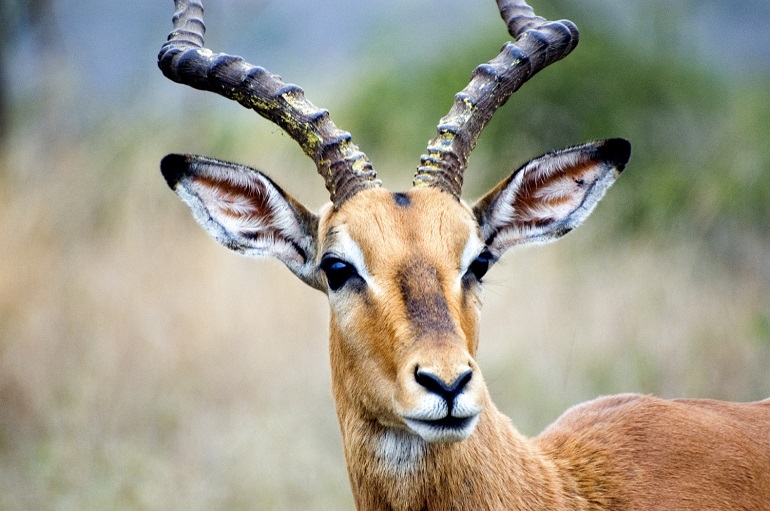 Impalas (Aepyceros melampus) are a type of antelope found in Africa. The name “impala” comes from the Zulu word for these animals, “inyama.”

Impalas are generally shy and peaceful animals but can become aggressive if they feel threatened. These animals are generally considered to be very attractive, and they are often featured in nature documentaries.

The Impala is a beautiful animal, with a reddish-brown coat and black stripes on its tail, forehead, ear tips, and thighs. Male impalas also have large, curved horns. These animals are found in sub-Saharan Africa and are an important part of the African ecosystem. This blog post will take a closer look at impalas and discuss some things that make them intriguing animals.

Impalas are members of the Bovidae family, which includes cows, buffalos, antelopes, and goats. These animals are herbivores, and they primarily eat grass. However, if necessary, impalas will also eat fruit, leaves, and bark.

Impalas are one of the most strikingly beautiful animals in Africa. They are reddish-brown to golden-brown with white underparts. Males tend to be more colorful and contain darker fur than females. The males’ horns can grow up to 40 inches (1 meter) long, while the females have no horns.

Impalas are medium-sized antelopes. They weigh between 120 and 210 pounds (55 and 95 kilograms). Males are about 30 inches (75 centimeters) tall at the shoulder, while females are a few inches shorter. The length of an impala from head to tail is about 4.5 to 5.6 feet (1.4 to 1.7 meters). Impalas are known for their distinctive markings and long, curved horns.

Impalas are generally timid animals, but they can be fierce when they feel threatened. When an impala is startled, it will often run away from the perceived threat instead of trying to fight.

However, if an impala is cornered or trapped, it will not hesitate to defend itself with its sharp horns. Impalas are also known to be good jumpers, and a running impala can easily leap over fences or other obstacles that are in their way.

Impalas are found throughout sub-Saharan Africa. They inhabit light woodlands and savannas where there is plenty of cover from predators. Male impalas establish territories, which they mark with urine and dung.

Females and young males live in groups called herds. These herds can be quite large, with up to 100 impalas. The Impala is the only member of the antelope family that has both male and female herds.

Impalas are grazers and prefer to eat grasses and herbs. However, if necessary, they will also eat leaves, fruits, and seeds. Impalas are generally peaceful animals, but males can become aggressive during mating season. Impalas are preyed upon by many predators, including lions, leopards, hunting dogs, and cheetahs.

Impalas are browsers and grazers, which primarily eat grasses and other plants. The mix of plants varies depending on the season and location, but some favorites include wildebeest grass, red oat grass, and teff grass. In addition to grasses, impalas eat leaves, buds, fruits, flowers, and growing vegetation.

The diet of an impala is largely dictated by the availability of food in its environment. In areas where food is plentiful, especially in the rainy season, impalas will eat more often and consume a greater variety of plants.

Like all animals, impalas need to drink water to survive. They typically get the water they need from the plants they eat but will also drink directly from water sources when necessary.

While they primarily eat plants, impalas will also occasionally eat small amounts of insects. This is usually done when plants are scarce or during the dry season. Insects provide impalas with much-needed protein and other nutrients that can be lacking in their plant-based diet.

Impalas are polygynous animals, meaning a male impala will mate with several females. The mating season of impalas falls between April and June. During this time, the males will battle for dominance to assert their control over a harem of females. Males who do not achieve dominance often join a bachelor herd.

After successful mating, the female impala will give birth to a single calf or twins. The gestation period for impalas is around six months. The new calves are born with spotted coats, which help to camouflage them from predators. These spots will eventually fade as the calves grow older.

Impalas will often form a nursery group with other calves for protection. These groups make it more difficult for predators to single out an individual and improve the chances of survival. Young Impalas are fed by their mother’s milk for four to six months and reach adult size in just over a year.

The lifespan of impalas in the wild is around 12 years. However, individuals in captivity can live for up to 20 years.

The primary predators of impalas are lions, leopards, and cheetahs. These animals typically prey on young or sick individuals as they are easier to catch. Impalas also face threats from humans. They are hunted for their meat and horns, used in traditional medicine.

There are some threats to the impala population. These include habitat loss, hunting, and competition from other animals.

Habitat loss is one of the major threats to the impala population. Humans are destroying the impala’s natural habitats for agriculture, housing, and other development projects. This habitat destruction leaves the impala with nowhere to live and eventually leads to the animal’s extinction.

Hunting is another threat to the impala populations. The Impala is hunted for its meat, considered a delicacy in some parts of the world. Hunting also reduces the population of predators, which can increase the number of prey animals, including the Impala.

The Impala is classified as least concern by the IUCN Red List. This means that the impala is not currently in danger of extinction. However, the impala population is declining due to habitat loss and hunting.

The Impala is protected by law in some countries, including South Africa. This protection helps ensure that the impala population does not decline further.

Protecting the impala population is important to preserve the animal’s natural habitat. This can be done by creating wildlife sanctuaries and national parks. Educating people about conserving the impala and its habitat is also important.

What Do Male and Female Impalas Called?

Impalas are one of the most widespread antelope species in Africa. The Impala is an important part of the ecosystem and plays a vital role in the food chain. However, the impala population is threatened by habitat loss and hunting. It is important to take action to protect the impala and its habitat. This can be done by creating wildlife-protected areas and national parks and educating people about conserving the impala and its habitat.

We hope you enjoyed reading about these gorgeous animals, you can share your view in the comment box below!