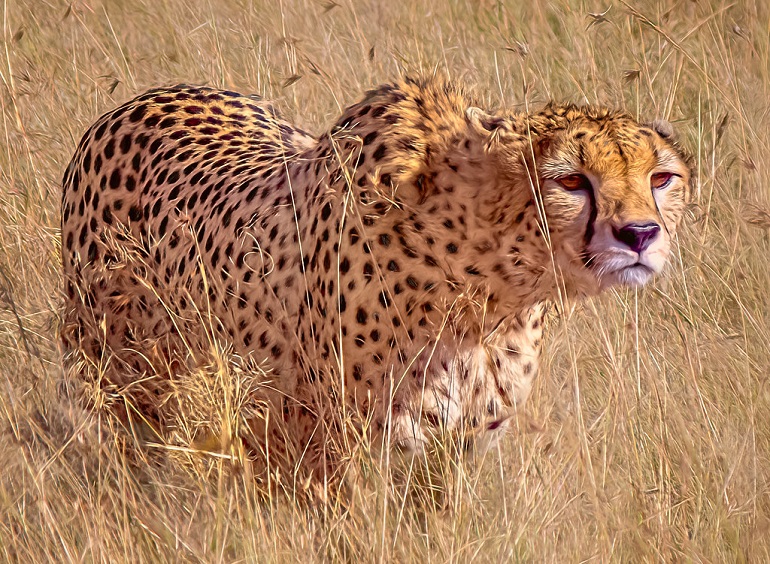 What Is a Cheetah?

Prior to the Great Ice Age, which caused significant environmental changes some 20,000 years ago, relatives of the modern cheetahs were found all over the world. Cheetas are one of the world’s most recognizable animals, known for their speed, agility, and spotted coats.

They are the fastest land animals in the world. Wild cheetahs are capable of reaching speeds of up to 70 miles per hour. These predators are found in Africa and central Asia, and although they once roamed across much of the globe, today, they are considered endangered. Cheetahs live for around 12 years in the wild and up to 20 years in captivity.

The classification of cheetahs as “large cats” is up for debate. According to some scientists, the name exclusively applies to roaring cats, such as lions, tigers, jaguars, and leopards. Although they can purr, cheetahs cannot roar. Nevertheless, conservation organizations frequently support a broader definition of “big cats” that also encompasses cougars and snow leopards.

This world’s fastest land animal is protected by the Endangered Species Act in the United States.

They are not built for long-distance running – they can only sustain their top speed for a few seconds before they need to rest.

Cheetahs are slender, muscular cats with long legs and long tails. They are tan with black spots all over their bodies, and they have a tear-streak mark that runs from the inside corner of each eye down to the side of the nose. Adult cheetahs typically weigh between 100 and 150 pounds. The cheetah’s prey species have developed speed and evasive mechanisms that can keep them just out of grasp.

From the eyes to the mouth, distinctive black tear stripes are said to shield the eyes from the glare of the sun. They are thought to serve the same purpose as a rifle scope by reducing sun glare so that they can focus on their prey from a distance.

The bushy tuft at the end of a cheetah’s tail is ringed by five or six dark rings. These patterns give them superb hunting concealment and make them harder for other predators to spot. The tail may serve as a signaling tool that enables young cubs to follow their moms over tall vegetation. Individuals’ tail tips can range in color from white to black.

Cheetahs live in Africa and central Asia in habitats including grasslands, savannas, woodlands, and scrublands. These areas provide cover for hunting prey and also offer an open landscape where they can see for long distances. Depending on their habitat, they can have different coats.

Throughout eastern and southern Africa, they can be found in a variety of habitats, however, they typically prefer open grasslands.

Only a few hundred of one subspecies, critically endangered Asiatic cheetah, are thought to remain, and they are only found in Iran. Nearly all of the African nations that make up the cheetah’s range take part in regional conservation initiatives designed to combat habitat loss by enhancing land planning, increasing public awareness of the need to save them, and encouraging the cohabitation of cheetahs and humans.

Cheetahs are carnivores, which means that they eat only meat. They typically hunt small antelopes and gazelles, but cheetahs eat rabbits, hares, and young deer. After a successful hunt, they will rest for around half an hour before beginning to eat.

As human populations have grown and expanded into cheetah habitats, these cats have come into conflict with people. They typically forgo hunting domestic livestock in favor of preying on wild animals. The exception is when cheetahs are sick, hurt, or young and inexperienced.

The farm animals that are lost to cheetah predation are typically also ill, injured, young, or old. Predation on livestock can be significantly reduced by housing animals in kraals and using non-lethal defenses.

Cheetahs are the fastest land animals in the world, capable of reaching speeds of up to 70 miles per hour. A cheetah can reach 60 miles per hour from zero in only three seconds, with acceleration that would blow most cars away. These cats can turn abruptly and quickly while traveling at great speeds in search of prey.

When cheetahs hunt, they stalk their prey until they are close enough to sprint. After a successful hunt, cheetahs will rest for around half an hour before beginning to eat. Cheetahs typically hunt in the early morning or late evening, when it is cooler and easier to spot prey.

There are several organizations working to protect cheetahs and their habitats. The Cheetah Conservation Fund is working to educate farmers about non-lethal methods of dealing with cheetahs, and the African Wildlife Foundation is working to create corridors of habitat that will allow them to move freely between protected areas.

By raising awareness and supporting conservation efforts, we can help ensure that these amazing animals will continue to thrive for years to come.

They are generally solitary animals, but they will sometimes form small groups called coalitions. Male cheetahs will stay with their mothers and siblings for a few years after they are born, but females will leave the group once they reach maturity.

The mating season for them occurs between late September and early November. During this time, males will compete for the attention of female cheetahs by roaring, biting, and wrestling with each other. After a female cheetah has chosen a mate, the pair will spend around a week together before going their separate ways.

Females usually give birth to litters of two or three cubs. A cheetah cub is born blind and weighs only about one pound at birth. They will stay with their mother for around 18 months before leaving to live on their own.

A substantial silvery-grey mantle extends down the back of cheetah cubs. The cloak mimics the appearance of the violent mammal known as a honey badger, which aids in concealing the cubs. Predators like lions, hyenas, and eagles may be discouraged from attempting to kill them as a result of their mimicry. At the age of three months or so, cubs lose their mantle.

They typically live for around 12 years in the wild, but they can live up to 20 years in captivity.

They are sometimes killed by farmers who see them as a threat to their livestock. They are also hunted for their fur. As a result of these threats, cheetah numbers have declined dramatically over the last century. There are now estimated to be less than 7,500 cheetahs left in the wild.

They do poorly in nature reserves, in contrast to other large cats and pack predators. These predators compete with cheetahs for prey and, given the chance, will even kill cheetahs. Therefore, 90% of cheetahs in Africa reside on private farmlands outside of protected areas, where they frequently come into confrontation with humans.

A predator that threatens a farmer’s livestock also poses a threat to the farmer’s way of life. Farmers take swift action to safeguard their riches, frequently trapping or killing cheetahs. Cheetahs are more frequently observed than nocturnal predators because they hunt more during the day, which results in a higher rate of cheetah persecution.

Cheetahs are one of the most iconic and beloved animals in the world. But they are also one of the most endangered. Cheetahs are the most susceptible of all the large cats in the world, despite the fact that their speed makes them fearsome hunters. The cheetah is currently classified as being at risk of going extinct by the International Union for Conservation of Nature.

Scientists have proposed that cheetahs should be classified as endangered in recent years, citing significant declines in cheetah populations. Less than 7,000 adult cheetahs are still present in the wild.

By raising awareness and supporting conservation efforts, we can help ensure that these amazing animals will continue to thrive for years to come.