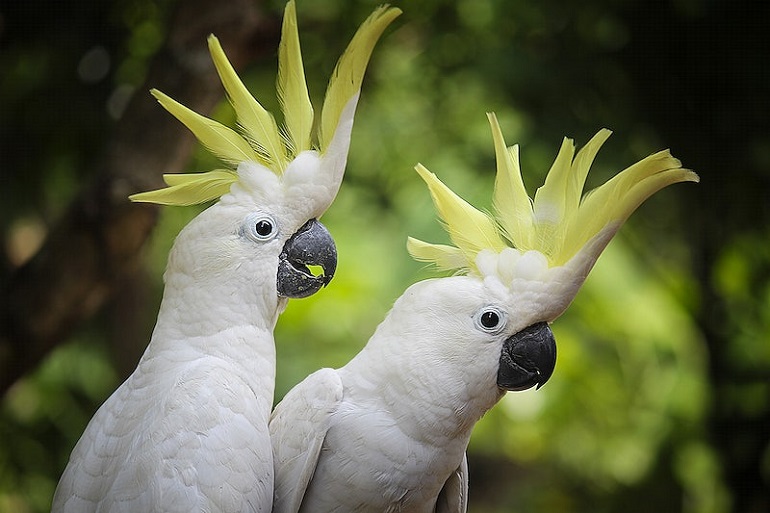 Cockatoos are one of the most popular pet birds. They are known for their intelligence, beautiful feathers, and playful and outgoing personality. They are very social animals and enjoy being around people.

Cockatoos live for up to 40 years in captivity but are not recommended as pets for first-time bird owners. However, they make great pets for people who have the time to interact with them and can provide a healthy environment for them.

If you’re considering getting a cockatoo, this post is for you! We’ll tell you everything you need to know about these amazing birds.

The Galah cockatoo (Eolophus Roseicapilla), also known as the rose-breasted cockatoo or galah parrot, is native to Australia.

The Major Mitchell’s cockatoo (Lophocroa Leadbeateri), also known as the Leadbeater’s cockatoo or pink cockatoo, is a medium-sized pink and grey cockatoo found in woodlands of Australia.

The Philippine cockatoo (Cacatua Haematuropygia), also known as the red-vented cockatoo or red-vented parrot, is a threatened species of cockatoo endemic to the forests of Luzon and Polillo Islands in the Philippines, with an estimated wild population of fewer than 200 birds.

The Palm Cockatoo (Probosciger Aterrimus), also known as the goliath cockatoo or great black cockatoo, is native to New Guinea, Aru Islands, and the Cape York Peninsula. Its distinctive features include a bare yellow or orange eye ring and a long protruding tail.

Cockatoos are omnivorous birds. In the wild, they eat various seeds, fruits, nuts, and insects. In captivity, cockatoos should be fed a diet that includes fresh fruits, vegetables, and high-quality pellet food.

Cockatoos need a diet that is high in fat and protein. Cockatoos also need fresh water at all times. Cockatoos like to chew on wood, so it is important to provide them with plenty of toys and branches to chew on.

Cockatoos are generally healthy birds. However, they are susceptible to a few health problems, including psittacosis, psittacine beak, bacteria infections, and feather-plucking. Cockatoos should see a veterinarian at least after every few months for a check-up.

Cockatoos are very social animals and enjoy being around people. They are known for their beautiful plumage and outgoing personalities.

Cockatoos tend to be noisy birds. They can be loud when they are excited or upset. Cockatoos have very loud calls that can be heard up to a mile away. Cockatoos should only be kept as pets by people willing to make up for their noise.

Cockatoos reach sexual maturity at around 2 to 4 years of age. The breeding season for cockatoos typically occurs between August and January.

Cockatoos mate for life and usually only have one mate at a time. Cockatoos build nests in tree cavities or holes in the ground. The female lays 2 to 4 eggs, which are incubated for about 28 days.

After the eggs hatch, both parents help to raise the chicks. The chicks fledge (leave the nest) at around 8 to 10 weeks of age. Cockatoos typically only have one clutch (set of eggs) per year.

Cockatoos occupy many habitats, including the forests of Australia, Indonesia, Papua New Guinea, Solomon Islands, and some parts of Southeast Asia. Cockatoos typically live in pairs or small flocks.

Entertainment for your Cockatoo

Cockatoos are very active birds and need a lot of space to fly and play. They should be kept in a large cage or aviary. They can become very attached to their owners and may become jealous of other people or animals in the home.

Cockatoos are social animals and need a lot of attention. They can easily become bored and may start to feather-pluck if not given enough attention. Spending time with your cockatoo every day is important to prevent boredom and feather picking. Several species like the Sulphur-crested Cockatoo, Umbrella Cockatoo, and Major Mitchell’s Cockatoo are known to be destructive and can destroy furniture and belongings if they are bored.

Cockatoos need exercise and should be given plenty of toys to play with. Cockatoos typically play with toys that make noise, such as bells and rattles. They also like to chew on wood, so it is important to provide them with plenty of toys and branches to chew on.

Cockatoos are admired for their intelligence and the ability to mimic human speech. Cockatoos can be trained to do simple tricks and learn commands. They can also be taught to talk, although they are not as good at talking as parrots. Cockatoos are very affectionate birds and enjoy being petted and cuddled.

Most species, such as Major Mitchell’s cockatoos, are listed as near threatened. In contrast, the Moluccan cockatoos are listed as critically endangered by BirdLife International because of habitat loss and capture for the wild bird trade.

Many species need large tracts of forest to live and breed. However, their forest habitats are being destroyed at an alarming rate due to logging, mining, and agriculture.

Several cockatoo conservation projects are underway in Australia, Indonesia, and Papua New Guinea. These projects are working to protect the cockatoo habitat and to raise awareness about the importance of conserving the endangered cockatoo species.

If you’re thinking of adding a cockatoo to your family, be sure to do your research and find an accredited breeder. Cockatoos are beautiful, intelligent, and social birds that make great pets. However, they are also high-maintenance pets requiring much attention and care. If you are considering getting a cockatoo, ensure you are prepared to provide the care it needs.

If you’re feeling motivated to help protect the Cockatoo’s habitat, consider donating to one of the conservation projects mentioned in this article. With everyone’s help, we can ensure these amazing creatures don’t become extinct!