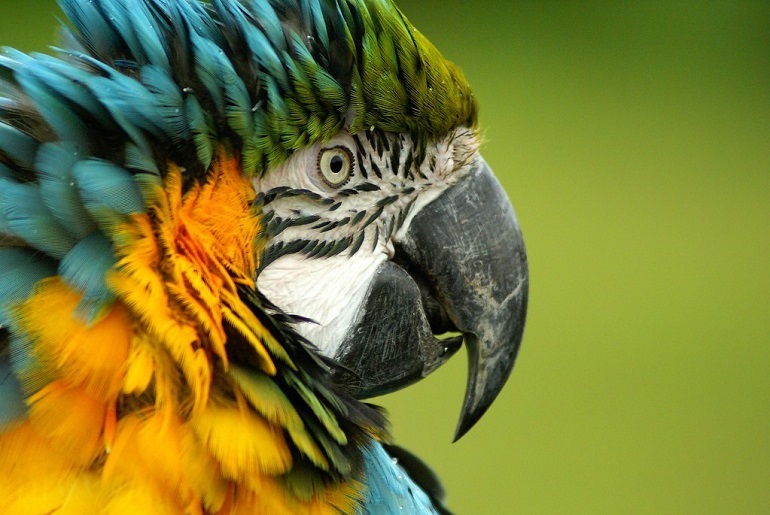 Macaws are a group of New World parrot species that are long-tailed and often colorful. There are 19 species of macaws, including extinct and critically threatened species. Macaws are native to Central America and South America.

Macaws are social birds that live in groups or pairs. They mate for life and build nests in trees. Macaws eat fruit, nuts, and seeds.

Unfortunately, some macaw tribes are threatened by habitat loss and the illegal pet trade. Macaws are popular for pet bird owners because of their intelligence, personality, and vibrant plumage.

However, macaws require a lot of attention and proper care to thrive. Therefore, potential macaw owners should research before bringing one of these beautiful birds into their home. These playful birds are the best chewers and favorite pets.

What Makes a Macaw?

Large, vibrantly colored parrots with long tail feathers are known as macaws. The naked face regions of macaws, which vary in size and pattern depending on the species, set them apart from other parrot family members. Their beaks can cause great damage to even very hard wood.

Most macaws enjoy bathing, where they splash around and have fun. For them screaming is a natural call. They engage in it to establish contact, demarcate territory, and even as part of the play. For humans, their calls can be extremely deafening!

They can also mimic sounds, and those living with or close to people frequently repeat sounds and words aloud until they master them.

The primary distinction between a macaw and a parrot is that macaws often have larger bodies, longer tails, and larger beaks. In addition, the appealing Psittaciformes, a vast family of vividly colored birds, includes both parrots and macaws. As a result, parrots and macaws exhibit similar behaviors.

They can grow to be quite large, with some species reaching lengths of up to 40 inches (1 meter) from the top of the head to the tip of the tail feathers. The largest macaw is the Hyacinth Macaw, weighing up to 4 pounds (1.8 kilograms).

They are known for their colorful plumage. The largest group of macaws, including the Green-winged Macaw, have red, yellow, and blue feathers. Some macaws, such as the Blue-and-gold Macaws and Military macaws, are mostly one color with accents of another hue.

The smallest macaw is the Hahn’s Macaw, which only grows about 12 inches (30 centimeters) long.

All macaws have strong beaks that are curved at the tips. They use their beaks for climbing, eating, and preening their feathers. In addition, they have zygodactyl feet, meaning that two of the toes point forward and two point backward. This type of foot arrangement gives them a good grip on tree branches.

They also have strong claws that help them climb trees and grasp objects. They typically mate for life in the wild and build nests high up in trees. Macaw pairs often stay close to each other, preening each other’s feathers and sharing food. They are very vocal birds, and they use a variety of sounds to communicate with each other.

They are intelligent and curious birds that can be trained to perform tricks and mimic human speech. However, they need much care and maintenance and are not suggested for first-time bird owners. They should be kept in a large cage or aviary; they need plenty of toys and branches to climb on.

They also need a regular diet of fresh fruits and vegetables. They typically live for about 50 years in captivity. They are popular pets because of their intelligence, personality, and vibrant plumage. However, they require a lot of attention and proper care to thrive.

They are native to Central America and South America. They typically live in rainforests, but some species can be found in woodlands, savannas, and mangrove forests. They spend most of their time in trees, building their nests.

They are social birds that live in groups or pairs. They are omnivorous birds that eat fruit, nuts, and seeds. They use their strong beaks to crack open hard shells. They also eat clay, which helps them detoxify their bodies and absorb essential minerals.

Some macaw species are threatened by habitat loss and the illegal pet trade. The biggest threat to them is the destruction of their natural habitats. Macaws are also captured and sold as pets.

The international trade of macaws is regulated by the Convention on International Trade in Endangered Species of Wild Fauna and Flora (CITES). Macaws that are bred in captivity can be legally traded.

They reproduce slowly and only have one or two chicks at a time. Macaw parents take turns sitting on their eggs to keep them warm. Macaw chicks hatch after about 30 days.

Along with feeding each other and enjoying reciprocal grooming, they not only reproduce together but also share food. Mothers care for the eggs during breeding while fathers hunt and bring food back to the nest.

Macaws reach sexual maturity at about 3 to 4 years of age. Some macaws will find new mates if their original mate dies. They build nests high up in trees, where they lay their eggs. They typically lay two to four eggs per clutch (group of eggs).

The population of macaws has declined in recent years due to habitat loss and the illegal pet trade. As a result, some macaw tribes are listed as endangered or critically threatened on the IUCN Red List.

Macaw with red fronts and blue-throated macaw is in grave danger. The glaucous macaw and Spix’s macaws may have gone extinct in the wild. The Population status of each macaw family is described below.

Conservation efforts are underway to protect them and their habitats. They are protected under the Migratory Bird Treaty Act, which makes it illegal to capture or kill macaws in the United States.

They are also listed in Appendix I of CITES, which prohibits the international trade of these birds. Conservation groups are working to stop the destruction of macaw habitats. They are also working to raise awareness about the illegal pet trade.

Several macaws are now classified as critically endangered or endangered, and several have completely disappeared or are extinct in their natural habitat. Parakeet habitat has been diminished by logging, farming, and construction.

For instance, the licuri palm nuts are the only food source for the Lear’s or indigo macaw, which is restricted to a small area of northeastern Brazil. The clearance of this palm forest has drastically decreased the habitat of Lear’s macaw. You can help to save and protect animals worldwide by supporting San Diego Zoo Wildlife Alliance.

The scarlet cockatoos (Ara Macao) is arguably the most well-known parrot from the New World. Its stark white face, which may blush when the bird is aroused, contrasts with its vibrant red, yellow, and blue plumage.

The scarlet macaw is most frequently observed flying in pairs, families, or flocks to and from their roosting and feeding locations. They have unique slow wingbeats, and their long tails trail as they fly. The Cocha Cashu Biological Station, a distant field station in a pristine rainforest region of Peru’s Manu National Park, is managed by San Diego Zoo Wildlife Alliance.

We hope this blog has greatly aided you in learning more about these fascinating birds. Visit us frequently to learn more about them.