Why Is My Cat Playing in the Litter? Is It Normal? And How to Stop It? 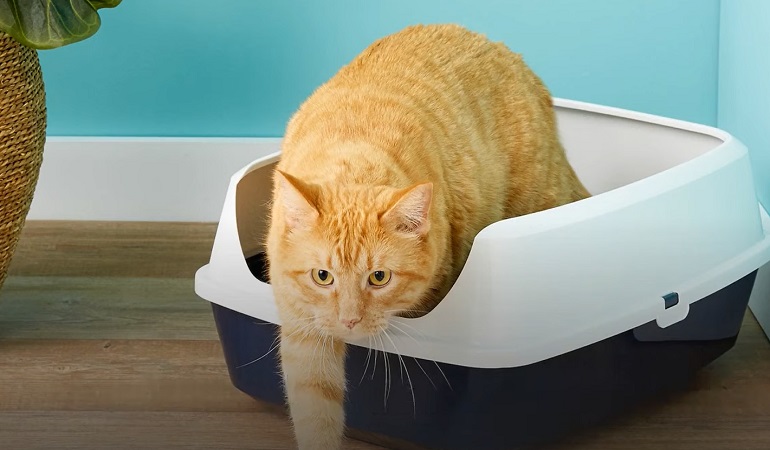 If you have a cat, you must have witnessed it playing in the litter box quite a lot. You must have wondered; when there are so many toys in its toy box, why would it come back to play in this mess?

Many a time, cat owners tend to get worried and look for the possible reasons their cats might be playing in their litter.

Well, playing in the litter box is completely normal cat behavior, considering it happens once in a while. However, if this becomes a regular behavior, there may be some underlying reason behind it that you need to look for.

Does Playing in the Litter Box Occur Frequently with Cats or Kittens?

It becomes an additional annoyance when your feline friend spends half of its time in the litter box, clumping litter all around it.

At the same time, when you see this behavior becoming repetitive, it may be an indication of a medical problem. This could also showcase some emotional issues that your new pet may be going through.

Whenever this gets excessive, you need to get this family member of yours to the vet to sort out the underlying issue if any!

Why Do Cats Play in Their Litter Box?

If you are wondering why your cat loves the litter box, the answer may lie in the several reasons stated below:

Kidney stones, Feline Interstitial Cystitis, and constant itching may also lead to the cat showcasing weird litter behavior. The never-ending itching leads to the cat rolling in the box. It may also keep scratching the body to no limits!

In such conditions, the cat owner needs to consult a vet soonest possible to rule out medical issues or get the required treatment, or it may lead to skin irritation. You need to rescue cats from the never-ending cat scratch, or it may cause rash and allergies that would gradually increase.

Whenever your cat is stressed or anxious, it may start spending most of its time in the litter box. As a new family member, it may feel anxiety while being amongst new faces. As it gets used to this new environment, this behavior will mellow down with time.

They Mark Their Territory

This litter box behavior is also showcased by the cats not only when they have feral instincts but also when they want to mark their territory. If you have gotten a new litter box that is unusual in appearance, the cat may want to own it before other cats in the house by spending maximum time in it.

If your cat is pregnant and you see her lying in the litter box, there are chances that she’s trying to tell you it’s time to give birth! No matter it’s the clean box or the messy one, cats find it comforting and safe when they have come to a full term in their pregnancy. Rush to the vet for her safety.

Your feline friend is easily bored! A lot of times, most cats play in the litter box simply because they are bored with the regular toys and want to try something different.

Dust Bathing in the Litter Boxes

Many mammals try to cool their bodies and relieve themselves of the uncomfortable itching by dust bathing. When the cats roll in the litter box, they are trying to do either of them. Though this act of dust bath annoys you, it really gives them some relief.

Burying Their Urine or Feces in the Cat Litter Box

Cats try to bury their fresh litter, not knowing that it’s not possible to do so in a litter box. They may want to hide their poop when there already is fresh litter inside the box. It’s a natural instinct that your feline friends may showcase at times, and there is no underlying reason behind it.

If you want to prevent your cat from spending most of its time in the litter box, here are some actions you can take:

Check to See If the House Has Enough Boxes

This is possibly the easiest way to keep your home clean from the litter being spread around, especially if you have many cats living with you. Cats tend to mark their territory by staying in the litter box for long periods.

When you have multiple cats, it is wise to learn how many litter boxes per cat you need. Try to keep a litter box at a different location for each pet to have a clean place to live.

Set up a special place for each cat, and make sure it poops there only! The more boxes you have in the house, the more will it be possible for you to have one box for each cat. Rather than going for a large litter box available, take various small boxes to let all the cats have their personal pooping space.

You can also use varied kinds of litter boxes for pets. When nothing works, get your hands on some cardboard boxes and assign them to each cat as its personal litter box.

Make Sure the Box and Litter Tray Are Clean

The litter box you have given to your cat has to be clean. If it’s not, it may lead to the spread of urinary tract infections. It’s a proven fact that dirty litter boxes are the most common reason for your pet having urinary problems.

If you are wondering how often should you change cat litter, the answer is every time you see fresh litter! It would reduce the chances of your cats playing in their litter and creating a mess all around the house.

Switching the old litter box with a new one is also a great way to make sure your cat’s playful behavior for the litter changes. Though it will take a few days for the cat to get used to the new box, it will surely be comfortable pooping in it soon!

If you have the budget, you can get your hands on an auto-cleaning litter box. Self-cleaning litter box would remove fresh litter instantly. Also, it would make sure the urinary tract infections do not spread from one cat to the other, and the house is odorless!

Or, try to have the best odor-control litter box possible, and it would make your house smell pleasant.

Anxious and disturbed cats may spend most of their time in the litter box. If your cat’s behavior has been weird for some days, you should get it to a cat behavioral specialist for a better diagnosis.

A lot of times, some neurological condition also leads to the cat playing in the litter for long hours.

Place the Litter Box in a Peaceful, Private Area

You need to be really careful while choosing the location of the litter box. Put it in the quietest possible place where loud noises don’t reach. If you place it somewhere near the play area, the cat would be enticed to go towards it and play in the litter.

The location of the box really matters a lot, so don’t place it where it gets the extra attention of your cat.

Why Is My Cat Playing in the Litter Box Query Resolved?

Now that you are aware of the various reason why your cat may be playing in the litter box, it’s time you take some additional steps to keep your house litter and odor free. Get a covered litter box, and it would make sure the unpleasant smell doesn’t spread across the house.

Also, your cat’s litter box should be cleaned frequently; possibly after every new litter. If you can’t wash the box, at least empty the litter box immediately.