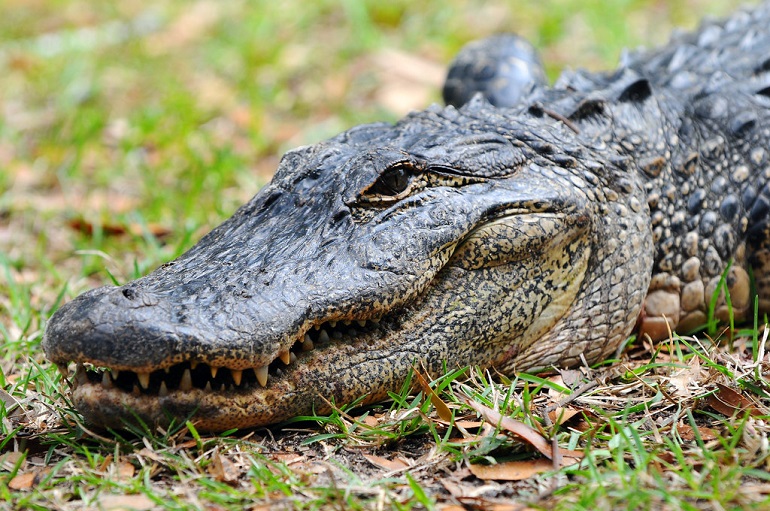 Alligators are large reptiles that live in swamps and marshes in the southeastern United States. They are related to crocodiles, but they are smaller and have shorter rounded snouts.

Florida is well-known for its alligators; for a good reason—they’re impressive creatures! Alligators can grow up to 14 feet long and weigh more than 1,000 pounds. They have sharp teeth and an incredibly powerful jaw that can crush bones.

Despite their size, alligators are shy and typically prefer to avoid humans. While encounters with alligators are rare, it’s important to be aware of their presence and take steps to avoid or deter them if necessary.

In this post, we’ll take a look at some of the interesting facts about alligators. Stay safe out there!

Alligators are generally grayish-black in color but can range from nearly white to black. The underside is typically a pale cream or white color.

Alligators have been around for millions of years and are one of the oldest species of animals on Earth. Alligators first appeared during the Triassic period, over 200 million years ago.

Alligators prefer freshwater environments such as ponds, marshes, wetlands, lakes, rivers, and swamps. However, they can also live in brackish water (water with a high salt content). Alligators are good swimmers and can even climb trees!

The average lifespan of an alligator is 50 years. The oldest known alligator was 79 years old.

Alligators are carnivores (meat-eaters). They are considered opportunistic feeders, meaning they will eat whatever food source is available to them. The diet of an alligator varies depending on its size and abundance of prey species. Smaller alligators may eat small fish, frogs, snakes, and insects. Larger alligators eat prey like fish, turtles, small mammals, birds, deer, and other invertebrates.

Alligator’s Life in the Water

Alligators are one of the most feared predators in the water. They have been known to attack and kill people who venture too close to their territory. However, alligators are not always the vicious predators they are made to be. They are quite shy and reclusive creatures that prefer to avoid humans whenever possible.

Alligators can be found in freshwater environments, such as rivers, lakes, and swamps. They are also common in brackish water, a mix of salt and fresh water. Alligators typically spend most of their time in the water, only coming onto land to bask in the sun or to mate.

Alligators are ectothermic, meaning they rely on external heat sources to regulate their body temperature. Alligators are most active in the daytime when the weather is warm. Alligators will bask in the sun during the cooler months to raise their body temperature. When the weather becomes too cold, alligators will bury themselves in the mud at the bottom of ponds and lakes to stay warm. When it gets too hot, they cool off by swimming in water or lying in the shade.

Alligators also help maintain the wetland habitats that they live in. Their digging and nesting activities help to aerate the soil and improve water drainage. This benefits plant life and other animals that live in these habitats.

The alligator is a timid creature and will usually avoid contact with humans. However, alligators can become aggressive if they feel threatened. Alligators are known to attack humans when they feel their territory is being encroached upon or when they are protecting their young. When alligators do attack, they can cause serious injury or death.

Mating season for alligators begins in late April or early May. During this time, male alligators will bellow loudly to attract females. Once a female is nearby, the two adult alligators will engage in a wrestling match to determine which one is the stronger mate. The victor will then mate with the female and help her build a nest out of vegetation.

After a 60-70 day gestation period, the female builds a nest of vegetation and lays 20-40 eggs. During the breeding season, both males and females extend their ranges. The female alligators will guard the nest until the eggs hatch after about two months.

The baby alligator, called a hatchling, is about 20 cm (8 in) long. Once they hatch, the young alligators will make their way into the water, where their mother will protect them until they are large enough to fend for themselves. Both males and females reach sexual maturity at the age of 10.

As of 2016, the estimated wild alligator population in the United States was approximately 5 million. Later it declined to 1.5 million, but this number has likely grown in recent years as alligator populations have recovered from hunting and habitat loss. The majority of these alligators live in Florida, where they are a protected species.

Alligator populations are monitored by state wildlife agencies to ensure they remain healthy. Hunting of alligators is closely regulated to prevent overharvesting. Alligator meat and hides are used for various purposes, including leather goods and culinary dishes. Alligator nests may be raided by raccoons and bears, while young alligators are at risk of being hunted by wading birds, otters, and larger alligators.

Alligators play an important role in their ecosystem by helping to keep populations of other animals in check. For example, alligators help control the population of snakes by preying on them. This benefits humans as well, as snakes can be a danger to people who live in areas where they are found.

If you’re visiting Florida, be sure to learn about local alligator safety precautions. For example, never feed alligators or approach them close enough to provoke an attack.

Alligators are apex predators, meaning they are at the top of the food chain and have no natural predators. However, humans are the biggest threat to alligator populations. Alligators are hunted for their skin, which is used to make leather goods, and their meat, which is considered a delicacy in some cultures.

Alligator populations have declined in recent years due to hunting and habitat loss because of human development. However, they are now protected by the Endangered species act in many areas, and their populations are beginning to recover.