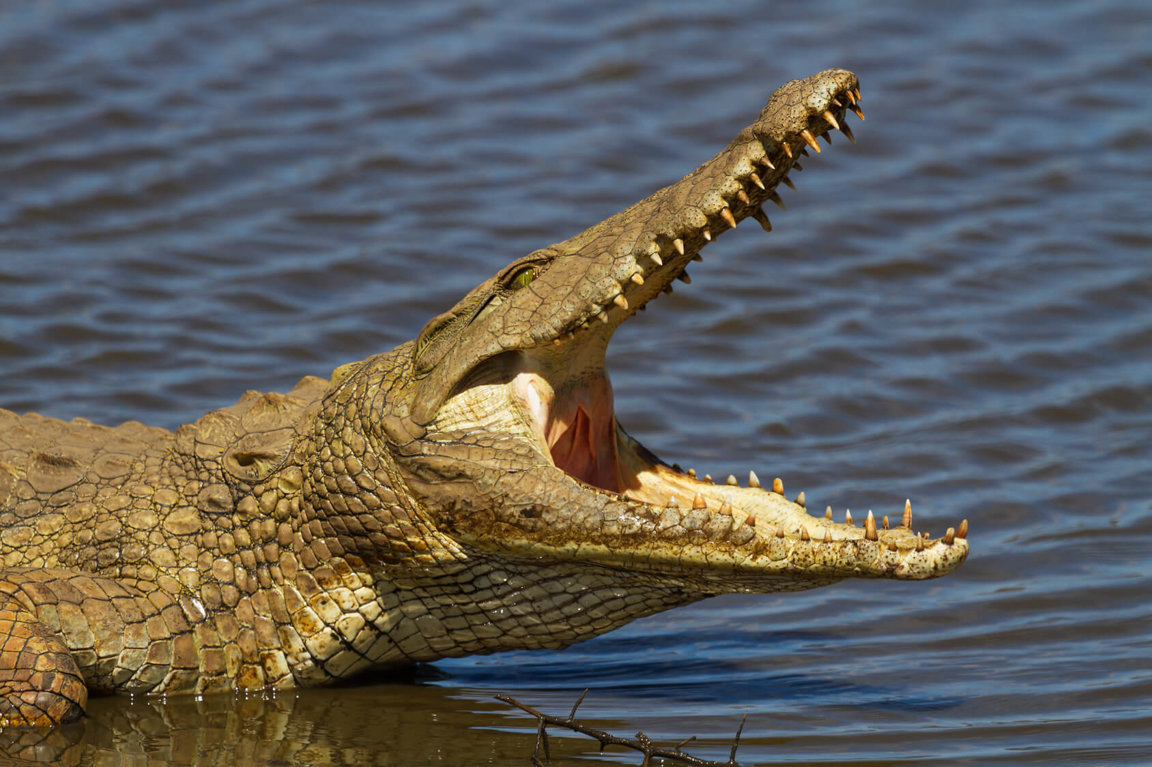 Crocodiles are some of the most feared creatures on Earth. Crocodiles or true crocodiles are large reptiles that live in tropical climates. They’re known for their sharp teeth, ability to kill prey quickly, and long lifespan. Crocodiles are relatively slow on land but can swim quickly in water. They often lie in wait for their prey to come close before attacking.

Despite their fearsome reputation, crocodiles are quite fascinating animals. This blog post will take a closer look at these reptiles and explore some interesting facts about them.

All crocodiles have long, narrow snouts, sharp teeth, three-quarters webbing on their feet, and strong tails. Some species also possess additional webbing between their toes. They vary in size depending on the species; the smaller species like dwarf crocodiles may grow to only 1.5 m (4.9 ft), while the largest such as the saltwater crocodile, can reach lengths of 7 m (23 ft) and weigh over 1,000 kg (2,200 lb).

Crocodiles have thicker skin on their bellies than on their backs. This is an adaption to living in water, as it protects them from sharp objects below. They also have salt glands that help them eliminate the salt water they drink.

Crocodiles vary in color, depending on the species. Some are grey, some are brown, and some are almost black. They have dark stripes or spots on their body that help camouflage them in their natural environment.

The skin of a crocodile is covered in small bumps called “scutes.” These scutes are made of bone and help to protect them from injury.

Crocodiles have very good eyesight and can see both in water and on land. They also have a good sense of smell, which they use to find food.

There are 18 extant species of crocodiles, but only a few are known to attack humans. Crocodiles range in size from the dwarf crocodile, which grows to about 4 feet (1.2 meters) long, to the saltwater crocodile, which can measure up to 23 feet (7 meters) and weigh more than 2,000 pounds (900 kilograms).

The most dangerous include the Nile crocodile, found throughout much of Africa; the Australian saltwater or estuarine crocodile, found in Australia and New Guinea; and the American alligator, found in the southeastern United States. All other crocodiles have much lower rates of unprovoked attacks on humans.

Some popular types of crocodiles are described below:

The American crocodile is found in southeastern United States, Central America, and northern South America. It can grow up to six meters (20 feet) in length and weigh 450 kilograms (990 pounds).

The Australian saltwater crocodile is the largest crocodile species in the world and can grow up to seven meters (23 feet) in length. It is found in northern Australia, Papua New Guinea, and the Solomon Islands.

The Nile crocodile is found throughout sub-Saharan Africa. It can grow up to six meters (20 feet) in length and weigh up to 900 kilograms (2,000 pounds).

The freshwater crocodile is found in Australia, New Guinea, and the Solomon Islands. It can grow up to five meters (16 feet) in length and weigh up to 200 kilograms (440 pounds).

The Crocodilia is an order of reptiles that includes alligators, caimans, crocodiles, and the gharial. With just 12 species, it is one of the smallest reptilian orders in terms of diversity. All crocodilian species are semi-aquatic and have long snouts, razor-sharp teeth, and thick, scaly skin.

Crocodiles have been around for a very long time, with the first members of the order appearing around 84 million years ago during the Cretaceous Period. The crocodilians we see today are similar to their ancient ancestors and have undergone very little evolutionary change.

Crocodiles are found in tropical regions of Africa, Asia, the Americas, and Australia. Some species, such as the American crocodile, are found in saltwater habitats like estuaries and cold areas, while others, like the gharial, prefer freshwater rivers and lakes.

Many species of crocodiles prefer nesting sites on land, near bodies of water. Some species, however, build nests in trees or dig burrows.

Crocodiles are generally solitary animals, but they can be found in groups of up to 100 individuals in certain areas. These large groups are usually made up of females and their young. Male crocodiles tend to live a more solitary lifestyle, only coming together with other males during the mating season.

Crocodiles are ambush predators who often lie in wait for their prey to come close before attacking. They will then use their powerful jaws and sharp teeth to crush their victim and drag it into the water, where they will drown it.

Crocodiles are highly territorial animals and fiercely defend their territory from other crocodiles and other animals. Male crocodiles will often fight each other for the right to mate with a female.

Crocodiles are long-lived animals and can live for up to 70 years in the wild. Sexual maturity occurs at around ten years of age in crocodiles.

Crocodiles are carnivores and will eat almost any type of animal they can catch. Adult crocodiles’ diet includes fish, reptiles, small mammals, and even birds. Some of the larger crocodiles have been known to attack and eat humans. Young crocodiles eat insects, snails, small fish, crustaceans, frogs, or tadpoles.

Crocodiles are oviparous animals, meaning that they lay eggs. Crocodiles reach sexual maturity between the ages of 7 and 10 years old. The female crocodile will build a nest of vegetation, mud, and debris to lay her eggs. She will then dig a pit into depositing her eggs and covering them with more vegetation.

A female crocodile lays between 20 and 50 eggs at a time. The incubation period lasts for about 80 days. The hatchlings are about 30 cm (12 in) long at birth and are vulnerable to predators such as birds, snakes, and other crocodiles. The young crocodile will often stay close to its mother for protection. They will reach full size after around ten years.

What do crocodiles and alligators have in common? Besides being reptiles, they belong to a family of animals known as crocodilians. Alligators are usually found in freshwater habitats like rivers and lakes, while crocodiles prefer saltwater environments such as estuaries, lagoons, and brackish water. Interestingly, both species can tolerate quite a wide range of conditions, making them incredibly adaptable creatures.

Crocodiles have a few predators, including humans. Some people hunt crocodiles for their meat and skin, which are used to make leather products.

Crocodiles are considered pests in many parts of the world because they can attack and kill livestock. Crocodiles also threaten humans, especially if they live near human settlements.

Crocodiles are also affected by habitat loss and degradation. As their natural habitats are destroyed or altered, crocodiles are forced closer contact with humans, which can lead to conflict.

Climate change is another threat to crocodiles. Rising temperatures and changes in rainfall patterns can cause problems for crocodiles, as they are sensitive to environmental changes.

Despite the many threats they face, crocodiles have survived for millions of years and are one of the oldest groups of animals on Earth.

The conservation status of crocodiles varies depending on the species. Some species, such as the saltwater crocodile, are classified as Least Concern, while others, such as the Chinese alligator, are Critically Endangered. The Cuban species is also listed as Threatened species on the IUCN red list.

Crocodiles are protected by law in many countries, and several conservation organizations are dedicated to their conservation.

Crocodiles and humans have a long and complicated history. Humans have feared and revered crocodiles since ancient times, and their image has appeared in many different cultures. Some cultures see aggressive and dangerous animals, while others see them as symbols of strength and power.

In some parts of Africa and Asia, crocodiles are considered a delicacy, and their meat is often sold in markets. In other parts of the world, such as Australia, they are seen as pests and often killed on sight. Crocodiles of larger species have also been known to attack humans. While they are not typically aggressive towards humans, they will attack if they feel threatened or try to protect their territory.

If you are ever near a crocodile, it is important to stay calm and avoid making any sudden movements. If you do find yourself in a situation where a crocodile is attacking, try to defend yourself with whatever you have available. With proper caution and respect, they can be enjoyed from a safe distance.

Crocodiles are amazing creatures that have been around for millions of years. They are an important part of the ecosystem and play a vital role in the food chain. They are also a keystone species, meaning they help maintain the balance of their ecosystem. With proper protection and management, these ancient animals will continue to thrive for many to come.