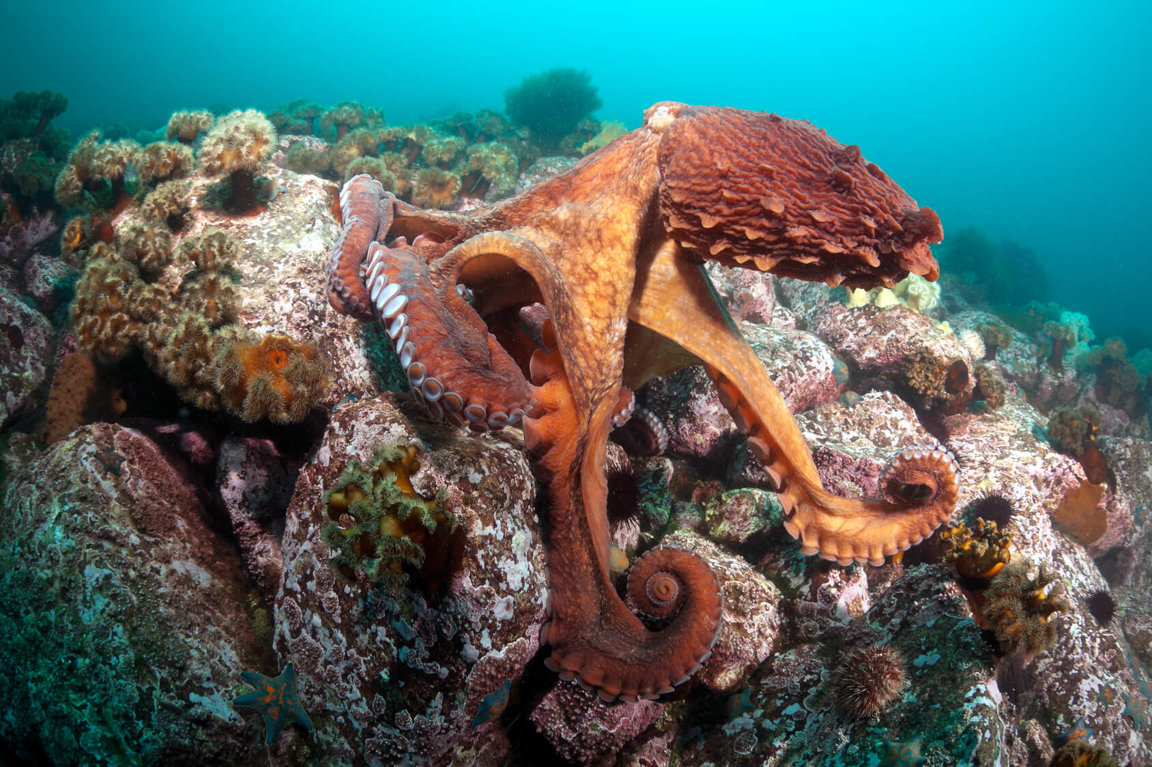 Octopuses are marine invertebrates with well-developed senses and several unique features. They are among the most intelligent and behaviorally diverse of all invertebrates and larger than many vertebrates.

Octopuses have a compact brain in their head region, enclosed in a cartilaginous cranium. They have large eyes and well-developed visual systems. Many species have color vision.

Octopuses are bilaterally symmetrical and have eight arms, each bearing two rows of suckers. They use their arms for locomotion and to manipulate objects. Most octopuses can change the color and texture of their skin to match their surroundings, making them difficult to detect.

The common octopus (Octopus Vulgaris) is found in all oceans but is most common in tropical and temperate waters. There are more than 300 species of octopus, and they come in various shapes and sizes.

This blog post will uncover interesting facts about the octopus you have never known. Stay tuned!

The octopus is a cephalopod, meaning ‘head foot,’ that includes around 300 octopus species, which is more than all other types of cephalopods combined. The scientific name of the octopus is Octopoda.

The term may also refer to only those creatures in the genus Octopus.

In the wider sense, it may also refer to any cephalopod mollusk with eight arms, such as the decorator crab (Oregonia species), which has two extra pairs of non-retractable dorsal arms and six legs. Octopus has a 14-foot (four-meter) arm span.

Molecular phylogenetic studies have shown that the order Octopoda is paraphyletic, meaning that it consists of two or more groups that have evolved independently from a common ancestor and that the term octopus may therefore refer to only some of these.

The scientific Latin term octopus was derived from the Ancient Greek term.

Octopuses are marine animals that live in all the world’s oceans. They can be found from the shoreline to the deep sea floor. Most octopuses live in shallow waters from the intertidal zone to depths of about 700 m (2,300 ft).

Octopuses like a gloomy octopus (Octopus tetricus) tend to live in areas with plenty of caves and crevices to hide in, as well as rocks and coral reefs. Octopuses are very curious creatures and have been known to enter small openings in search of food.

Octopuses are carnivorous animals. They feed on various prey, including crabs, clams, lobsters, shrimp, small mollusks, and other octopuses. Octopus arms and suction cups are used to capture their prey and bring it to their mouths. They then inject venom into their prey, which paralyzes it and makes it easier to eat.

Octopuses will also sometimes attack larger prey items such as fish. When hunting, octopuses will often hide in rocks or coral reefs, waiting to ambush their unsuspecting prey.

The average lifespan of an octopus is one to three years. However, some octopuses have been known to live for as long as five years in captivity.

Octopuses are excellent swimmers and can propel themselves through the water using jet propulsion. By sucking water into their mantle cavity and rapidly contracting, they can shoot the water back out through a siphon. By doing so, they can control the water’s direction.

Octopuses can also squirt out a cloud of ink when they feel threatened. This ink is used to confuse predators and allow the octopus to escape. Octopuses are also able to change their skin texture and color. This camouflage helps them to blend in with their surroundings and escape detection by the potential predator.

Octopuses are solitary creatures and do not live in social groups. They are generally aggressive towards each other and will fight for food and territory. Octopuses typically only interact with each other during mating season. Males will compete for the opportunity to mate with a female octopus.

Octopuses are intelligent creatures and have been known to solve complex puzzles. The veined octopus (Amphioctopus marginatus) has also been observed using tools to help it complete tasks. Octopuses are curious creatures and will often explore their surroundings.

Octopuses reproduce by laying eggs. The female octopus lays thousands of eggs at a time and then dies shortly after. Once an octopus hatches from its egg, it goes through a brief larval stage before settling into its adult form.

The young octopus, or “paralarva,” is oval-shaped and translucent, with large eyes and long, trailing tentacles. At this stage of their life cycle, they are very vulnerable to predation and must rely on their cryptic coloration for camouflage.

As they grow and develop, they undergo a series of molts in which they shed their old skin and grow a new one. After each molt, the octopus becomes progressively more like its adult form.

When they reach maturity, octopuses can range in size from just a few inches to over six feet in length. They typically live for one to two years, although some species can live for up to five years. During this time, they continue to grow and molt, shedding their old skin several times a year.

Octopuses are solitary creatures and generally only come together to mate. The male octopus uses a specialized tentacle called a hectocotylus to transfer sperm into the female’s oviduct. After mating, the female guards its laid eggs in a protected den until they hatch. Once the eggs hatch, the young octopuses must fend for themselves.

Octopuses are mollusks, a group of animals including squid, cuttlefish, nautiluses, and slugs. Mollusks are characterized by their soft bodies, and most species have an external shell. Octopuses have a layer of muscle beneath their skin that provides them with protection.

Octopuses are invertebrates, meaning they do not have a backbone. Their bodies are supported by a network of muscles and fluid-filled cavities called coeloms. This arrangement gives octopuses the flexibility to squish their bodies through tiny spaces.

Octopuses have the largest brains of all cephalopods and are among the most intelligent invertebrates. Octopuses have three hearts. Two of the hearts pump blood to the octopus’s organs. The third heart pumps blood through the gills. Octopus blood is blue because it has a copper-rich protein instead of iron.

Octopuses are carnivores, meaning they eat other animals. Octopuses typically hunt at night, using their keen eyesight to spot potential prey. They then use their tentacles to grab the victim and bring it close to their mouths. Octopuses have a beak-like mouth with a tongue-like structure called the radula, which they use to tear their prey into pieces.

Octopuses are venomous creatures and use their venom to subdue their prey. The venom is injected through the tips of the octopus’s tentacles, quickly paralyzing the victim. Octopuses then use their radula to drill through the prey’s shell (if it has one) and inject digestive fluids. The octopus then sucks out the liquefied flesh of its victim.

Does Octopus Have More than One Brain?

The octopus is a fascinating creature with many unique features, one of which is its nervous system. Unlike most other creatures with a centralized brain, the octopus has several “brains” located throughout its body.

These “brains” are clusters of nerve cells (neurons) and control different areas of the octopus’s body. For example, a cluster of neurons near each eye controls that eye’s movements.

So, while an octopus does not have a single large brain as we do, it does have a complex nervous system that allows it to perform amazing feats!

There are many reports of octopuses escaping from their tanks and wriggling down pipes to get to another part of the aquarium. They have also been known to steal fish from other tanks and return it to their tank.

In one incident, an octopus in England squirted water at a passing train, apparently for fun. Octopuses are also very good at opening jars and other containers. Scientists believe that they can learn by watching others of their kind.

Some octopuses can change their color and texture to blend in with their surroundings. This is called camouflage. They do this when they want to hide from predators or hunt for food.

Octopuses are very intelligent creatures. They can learn and remember tasks. In one experiment, an octopus was taught how to unscrew a jar. The octopus could remember how to do this even when the jar was presented upside down.

Octopuses also can recognize people’s faces. In another experiment, an octopus was presented with two pictures of the same person, but one was wearing a mask. The octopus could correctly choose the picture of the person without the mask, showing that it could recognize the person’s face.

Octopuses are fascinating creatures with many amazing abilities. They are intelligent, recognize people’s faces, and change their appearance to blend in with their surroundings. The mimic octopus can change its appearance to more dangerous animals like sea snakes or lionfish to befool the predators.

Although they have a relatively short life span, octopuses are masters of survival. Their flexible bodies and keen intellect allow them to escape even the most skilled predators.

They are also proficient hunters, using their tentacles to capture prey and inject them with venom. Octopuses are truly unique animals.