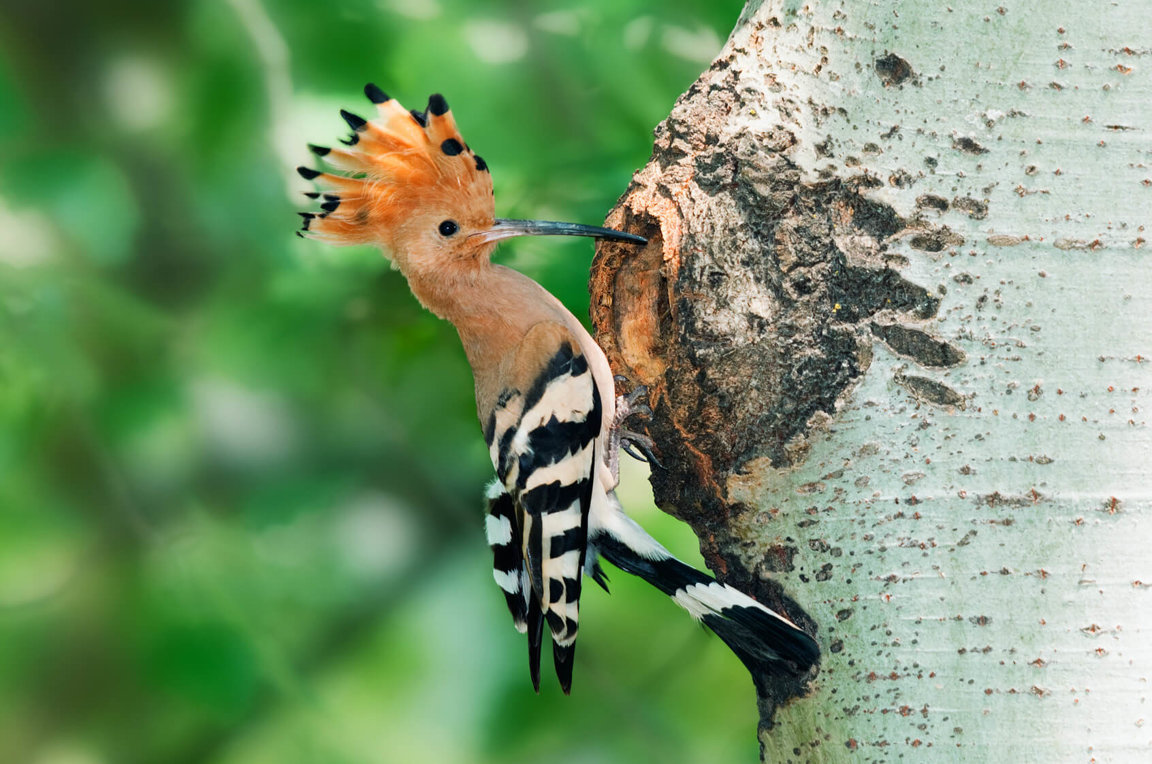 Woodpecker birds are one of the most interesting and unique birds. Around 20 species of woodpeckers are found on the continent and are members of the Picidae family, including flickers and sapsuckers. Woodpeckers are known for their ability to drill holes into trees using their beaks and use these holes for nesting and roosting. Woodpeckers are mostly found in wooded areas, but some species can also be found in open fields or near houses.

Woodpeckers are small to medium-sized birds with stout bodies and short necks. Their wings are relatively long and have stiff tail feathers for support when climbing trees.

Woodpeckers have strong legs with sharp claws that help them grip onto tree trunks. Their beaks are long and curved, and they have a tongue that is nearly as long as their beak. This tongue is covered in barbs, which helps the woodpecker grip onto prey.

Many types of woodpeckers are found in North America, and each bird species has unique features. Here are some of the most common woodpecker species found on the continent:

The red-bellied woodpecker is a medium-sized bird that is found across much of the southeastern United States. This woodpecker is mostly gray with a white belly and red wings. Male birds also have a red cap on their head.

The hairy woodpecker is a large woodpecker found in forests across North America. This bird is mostly black with white stripes on its back and wings.

The White-headed Woodpecker is a rare woodpecker found in the western United States and British Columbia’s mountainous pine forests. This bird is mostly black with white stripes on its back and wings. The glossy black bird has a gleaming white head and neck, with a red crown patch in males.

The Gila woodpecker is found in the southwestern United States and northern Mexico. The noisy desert bird draws attention as it digs into tree trunks and saguaro cactuses, searching for nesting cavities. They are occasionally spotted at hummingbird feeders, but most of the time, they forage for fruit and insects on cactuses, trees, and other plants.

The Ivory-billed Woodpecker was thought to be extinct until a few sightings in the early 2000s. The last confirmed sighting was in 1944, but there have been unconfirmed sightings since then. The bird is mostly black with white stripes on its back and wings. The male has a red crest, and the female has a white crest. The Ivory-billed Woodpecker is the largest woodpecker in North America and one of the rarest birds in the world.

Woodpeckers are known for their ability to climb trees and drill holes into the trunks to find food. These birds eat insects, and they also eat tree sap, fruits, and nuts. Woodpeckers use their long tongues to reach deep into crevices to catch insects. Some woodpeckers will even drill holes into trees to get at the insects inside.

Woodpeckers will also eat suet, which is a type of fat. Suet is a great food for woodpeckers because it gives them the energy they need to fly and drill nest holes into trees.

Woodpeckers nest in holes that they drill into dead trees. These birds will use their beaks to chisel away at the wood until they have made a deep hole. Woodpeckers will then line the nest with soft materials like mosses or leaves.

Woodpeckers typically lay 4-6 eggs per clutch, and both parents will help to incubate the eggs and care for the young chicks. The young birds will stay in the nest for 4-6 weeks before they are ready to fly on their own. These birds are most active during the day and usually mate for life.

How Climate Change Will Reshape the Range of the Woodpecker?

Woodpeckers are found in forests across North America. However, as the climate changes and forests become drier, woodpeckers will likely move to cooler, moister areas. It is also possible that some woodpecker species will go extinct if climate change causes their habitat to disappear entirely.

Woodpeckers are fascinating birds and play an important role in their ecosystems. However, as the climate changes, woodpeckers will likely face new challenges. It is important to protect these birds to continue to thrive in the years to come.

Importance of Woodpeckers in the Ecosystem

Woodpeckers are important birds in the ecosystems because they help to spread tree seeds around forested areas. In addition, these birds eat acorns and store them in small holes that drill into tree trunks. The acorns that the woodpeckers don’t eat will eventually sprout and grow into new trees.

Woodpeckers are also important because they help to control the population of insects. These birds eat a lot of insects, and this helps to keep the insect population in check. Without woodpeckers, there could be more insects in forests, leading to problems for other animals living there.

What Can You Do to Help the Bird Conservation?

There are a few things that you can do to help woodpeckers. First, you can help to protect the bird habitat by supporting organizations that work to conserve forests, such as the National Audubon Society. You can also put up birdhouses in your backyard and make sure to put out a suet for these birds to eat.

You can also help woodpeckers by being careful not to use pesticides in your yard. These chemicals can be harmful to woodpeckers, and they can also contaminate the food that these birds eat. If you use pesticides, follow the directions carefully, so you don’t accidentally hurt these creatures.

Woodpeckers can contract other diseases, such as West Nile virus and Lyme disease. Ticks transmit these diseases, and they can cause a variety of health problems for woodpeckers. If you find a sick or injured woodpecker, it is important to take it to a vet to get the treatment it needs.

Woodpeckers are also susceptible to injuries. These birds fly into windows and can get hurt if they hit power lines or other obstacles. If you find an injured woodpecker, you should take it to a vet or rehabilitator to get the help it needs.

Woodpeckers are interesting birds that are sure to intrigue anyone who sees them. These birds are an important part of the ecosystem and play a vital role in spreading tree seeds. If you are lucky enough to spot a woodpecker in the wild, be sure to take the time to appreciate these amazing creatures!