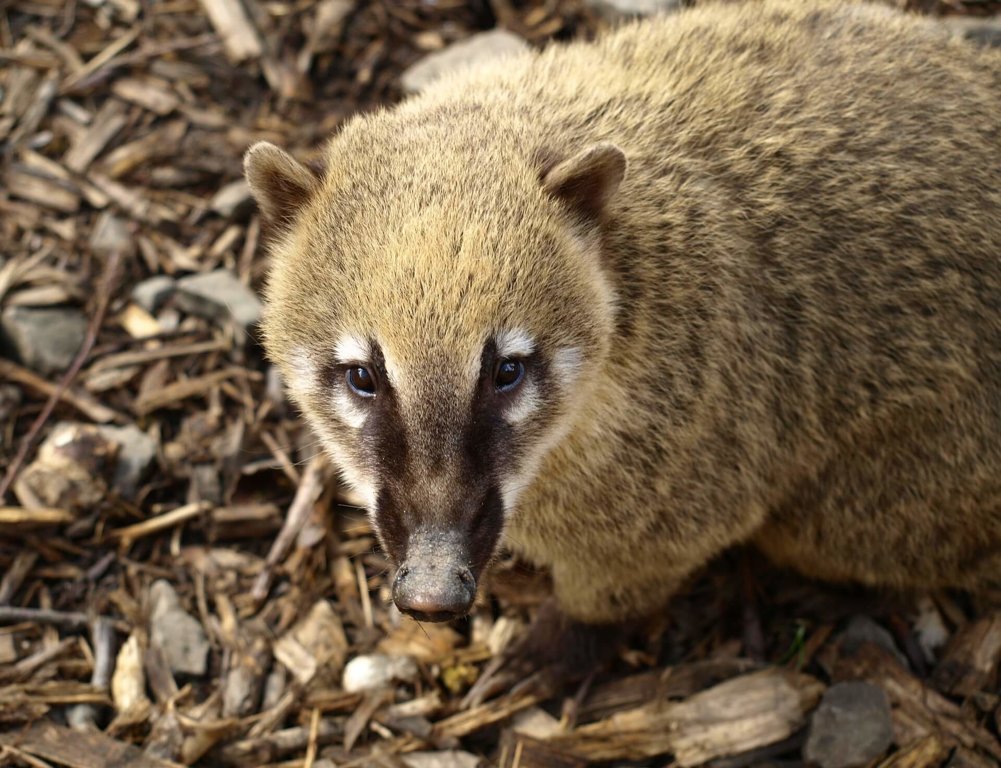 Coatis are a group of five species of South American mammals in the genus Nasua. Coatis are related to other procyonids, such as raccoons, olingos, and kinkajous. They look like a cross between a monkey, a rat, and a raccoon. Coatis have long noses and bushy prehensile tails that help them balance on the tree. Coatis have evolved double-jointed ankles and strong claws to climb trees and capture prey from logs and burrows. They live in forests and eat insects, small mammals, and fruit.

Coatis are native to South America but have been introduced to Central America, the Caribbean, and Mexico. They are considered pests in some areas as they damage crops and steal food from people’s homes. In this post, we’ll take a closer look at coatis and share some interesting facts about them. Stay tuned!

What Is a Coati?

Coatis are one of the cutest mammals in the animal kingdom. A coati is a small mammal that belongs to the raccoon family. Coatis are found in Central and South America. Their long tails, reddish fur, and black “mask” around their eyes make them stand out from other animals.

Coatis have a long, flexible snout to sniff out food. They are very good climbers and live in forests, where they eat insects, small mammals, and fruit. The male coati is aggressive towards other coatis, and fights are common. Males living alone are called coatimundi, although they are still considered coatis.

Coatis are found throughout Central and South America, from Mexico to Argentina. They inhabit various habitats, including rainforests, dry forests, swampy areas, and grasslands. They are also known to live in agricultural areas and human settlements. These animals are very adaptable and can even survive in degraded habitats. The largest population of coatis in the world is found in Brazil’s capital city of Sao Paulo!

The word “coati” comes from the Tupi language of Brazil. Coatis are also known as coatimundis (from the Guaraní name koatí mundí), meaning “lone coati,” or quatis (from the Brazilian Portuguese name quati), and hog-nosed raccoon.

Coatis are members of the Carnivora family Procyonidae genus, in the genera Nasua and Nasuella. There are four species of coati:

Nasua nasua is the most widespread and can be found from Costa Rica to northern Argentina. N. narica is found in Venezuela, Colombia, Ecuador, Peru, Guyana, Suriname, French Guiana, and Bolivia.

Nasuella olivacea is found in northwestern Colombia and southwestern Ecuador. The fourth species, N. meridensis, is endemic to the Atlantic Forest of southeastern Brazil. All four species of coati occupy tropical forest habitats.

Fruits and nuts make up the majority of a coati’s diet. In Costa Rica, where they are known as pizotes, they are fond of melons, oranges, bananas, and mangoes. Insects such as grasshoppers, beetles, and ants are also part of their diet. Small mammals such as rodents and opossums are occasionally eaten as well.

Coatis will also eat reptiles such as lizards and snakes. They have been known to kill and eat venomous snakes, such as coral snakes. Arthropods such as crabs and crayfish are also part of their diet.

Coatis are very social animals and live in groups of around 20-40 individuals, although some groups can be much larger. These groups are known as bands. The group comprises related females and their young, with a single dominant male. The females stay with the group for life, but the male coatis will leave to join another group or live alone once they reach maturity.

The hierarchy within a coati group is quite strict, with the most dominant animals having first access to food and other resources. However, there is also a lot of cooperation within the group, and members will often care for each other’s young.

Coatis are not territorial but have home ranges that they defend against other groups. These home ranges can overlap, and groups are not uncommon to contact each other regularly.

Coatis are diurnal animals, meaning they are active during the day. They spend most of their time searching for food, resting, and playing in trees or on the ground. Coatis are good climbers and often sleep in tree trunks. Adult males are often solitary until they are ready to mate.

Coatis are polygynous animals, meaning that each male mates with multiple females. Breeding season for coatis typically occurs between December and April. During this time, males will establish territories and use various visual and vocal displays to attract potential mates. Once a female is ready to mate, she will signal her interest to the male by urinating on his head or back.

After mating, the female will build a nest to give birth to her young. Litters of 1-7 young (called “coatimundis”) are born after a gestation period of around three months. The newborns are blind and deaf at first, but they grow quickly and are weaned after just a few weeks.

Coatis reach sexual maturity at around two years but do not typically reproduce until they are 3-4 years old. The average lifespan in the wild is about 7-8 years, but captive coatis have been known to live for up to 20 years.

Coatis are hunted by predators, including jaguars, ocelots, harpy eagles, and snakes. They have several defense methods, including running up trees to escape predators, fighting with their sharp claws, and making loud vocalizations.

There are many threats to the survival of coatis. These include:

Coatis rely on forest habitats for shelter, food, and raising their young. However, deforestation is reducing the amount of suitable habitat available for them. This is a major threat to their survival. Many tropical animals, such as coatis, are victims of the illegal pet trade.

2. Hunting for Their Fur

Coatis are hunted for their fur, which is used to make clothing and other items. This is a major threat to their survival as it reduces the population size and makes it difficult for them to find mates and reproduce.

3. Competition from Other Animals Encroaching on Their Territory

As deforestation reduces the suitable habitat, other animals such as pigs and dogs encroach on coati territory. This increases competition for resources and can lead to conflict between species.

Coatis are often hit by cars as they cross roads in search of food. This is a major threat to their survival as it reduces the population size and increases the risk of injury or death.

5. Zoonotic Diseases Such as Leptospirosis, Which Can Transmit to Humans

Coatis can carry diseases transmitted to humans, such as leptospirosis. This is a major health concern as it can cause serious illness or death in humans. To reduce the risk of transmission, it is important to avoid contact with coati urine and feces and to wash your hands after coming into contact with them.

According to the IUCN’s Red List of Threatened Species, white-nosed coatis are not considered threatened. They are protected under CITES Appendix III and offered protection as an endangered species in New Mexico. The two species of Nasuella mountain coatis are considered endangered and on the verge of extinction.

However, they are hunted by humans for their meat and fur, and their habitat is being destroyed by deforestation. In some areas, people think that coati meat has magical powers and use it in folk medicine. Additionally, they are killed because they sometimes pose a threat to chickens and other farm animals.

As a result of these threats, the populations of some coati species have declined sharply. Conservation efforts are underway in some areas to help protect these animals and their habitats. However, more needs to be done to ensure the long-term survival of these fascinating creatures.

Coatis are valuable members of their ecosystems and play an important role in dispersing seeds and controlling pests. However, they are threatened by human activities such as deforestation, hunting, and competition from other animals for resources. They are also kept as pets in some parts of the world.

To ensure the survival of these species, it is important to protect their habitats and reduce the threats they face from human activity.